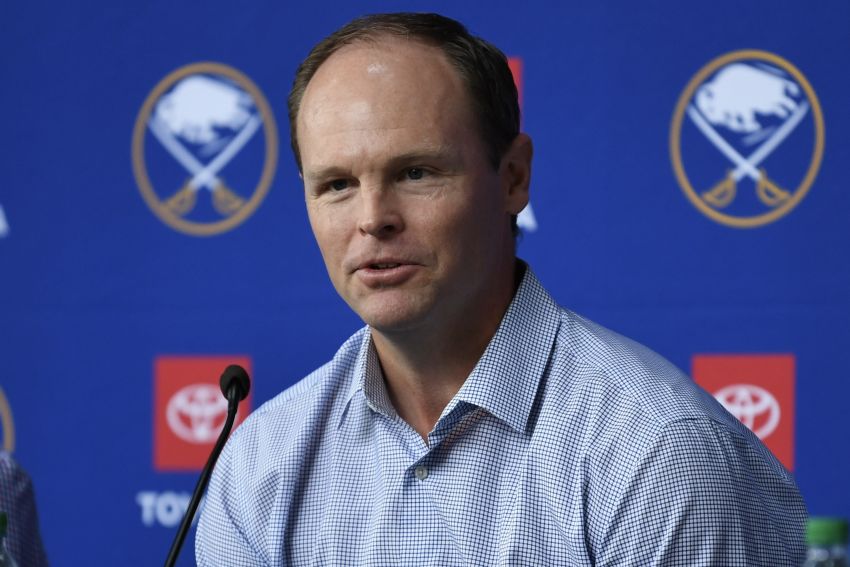 BUFFALO – A year ago, the Sabres saw value in Russian prospects, so they drafted four of them, including three straight in the second and third rounds.

Taking a single Russian would’ve been notable; the Sabres hadn’t selected one in five years. Grabbing so many, especially early, indicated general manager Kevyn Adams would operate differently than his predecessors.

The world, of course, has changed a lot over the past year. Russia’s invasion of the Ukraine has had a ripple effect on the hockey world, and the country’s prospects did not participate in the NHL Scouting Combine or World Under-18 Junior Championship.

In the past, Russians have sometimes stayed home to play or bolted back overseas. With more uncertainty this year, some teams might shy away from drafting them.

Adams, however, said he has asked his staff to “evaluate them as hockey players first.”

“Let’s put our list together,” Adams said Thursday inside KeyBank Center during media availability to discuss next week’s NHL Draft and other offseason items. “Let’s not worry about where players are from. Let’s put together our list and then we can put a little asterisk, we can look at it and have the conversation. In terms of how we kind of move forward on that, we’ll see.

“What we will be open to is if we get to a spot in the draft where we feel that there’s real value there, then we’re going to talk about that.”

He added: “You certainly take into account some of the unknowns.”

“We just haven’t had as much access as you would have had to some of these players three years ago,” he said. “But we have had a lot of live viewings of them this year.”

So far, the Sabres appear to be pleased with the Russians they drafted in 2021.

Forward Aleksandr Kisakov, the 53rd overall pick, recently signed his entry-level contract. Adams said the youngster could attend development camp later this month. If his paperwork isn’t finished by then, Adams said he could arrive for training camp.

“That’s a very positive development,” Forton said. “It was part of our excitement with Sardarian and that development path for him.”

The Sabres also drafted forward Prokhor Poltapov and defenseman Nikita Novikov – both of whom spent some some of last season in the Kontinental Hockey League – 33rd and 188th, respectively. Novikov represented Russia at the World Junior Championship.

“Novikov and Poltapov we’re still extremely high on as players,” Forton said. “But we knew with all these players it would be a two- or three-year process, like any player taken maybe outside of the top three or four in the draft – you’re going to wait a few years on these players.”

Over the past month, Adams said every person in the hockey world he has encountered has told him, “I’ll see you in Montreal.”

“I don’t know if they’re going to have enough enough hotel rooms in Montreal to fit everybody,” he joked.

The COVID-19 pandemic forced the NHL to hold the last two drafts virtually, so the upcoming event at the Bell Centre – the first round will be held on Thursday night and rounds two through seven on Friday – will be Adams’ first in person.

He spent the last two drafts operating out of a war room in the team’s offices.

“I can tell you this, I won’t have like 15 note cards in front of me so that people could see, or cameras can see,” Adams said. “Because when you’re up in the war room, you can hide it a little bit. So that will change.”

Adams said “nothing replaces communication back and forth in person.”

“For me to look over the table and to be able to walk over and have a conversation, there’s nothing better than that,” he said.

One thought on “Sabres notes: Will Buffalo draft more Russians this year?”