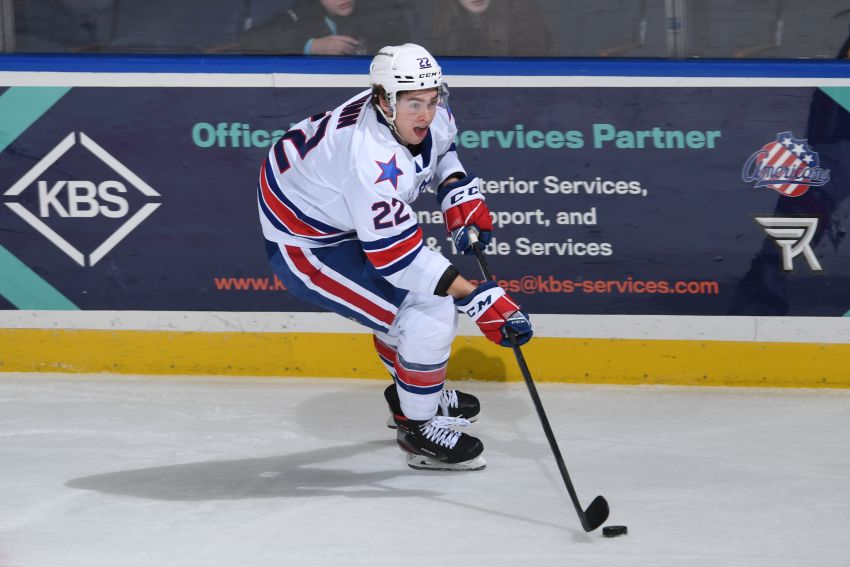 BUFFALO – On Wednesday, a day after winger Jack Quinn enjoyed a terrific NHL debut, the Sabres sent the prospect back to the Rochester Americans.

Why? Given the Sabres’ recent struggles – they’re on a six-game winless skid entering tonight’s road contest – another game couldn’t have hurt, right?

Coach Don Granato said Quinn, who pumped three shots on goal and had two or three strong scoring chances, was one of the Sabres’ best players in their 6-1 loss to the Tampa Bay Lightning.

Granato said Quinn’s recall was partially a reward for his torrid start with Rochester, where he scored 12 goals and 26 points in his first 20 outings for the Americans. The Sabres, having lost some forwards to COVID-19 protocol, also needed Quinn.

But Kyle Okposo and Alex Tuch have left protocol and appear to be ready to play tonight against the Nashville Predators.

“We’re going to have Okposo, Tuch coming back in but we felt what a great opportunity (for Quinn),” Granato said following Wednesday’s practice inside KeyBank Center. “We communicated to him do it, get all this hindsight. We had a great conversation with him this morning even and he talked about how, yeah, it was interesting to see how little time and space I have.

“He had two great scoring chances and he said, ‘You know, in the American League, I would have scored those, basically.’ The defender was a little smarter, a little quicker, a little more skilled. I always say players have to calibrate the next level so you give them a taste of it.”

Quinn, 20, played in Wednesday’s 7-6 win over the Utica Comets, recording one goal and setting new career highs with three assists and four points. He recently recovered from mono, and he has played only five total games since Nov. 27.

“Conditioning was a factor, but game after game right now, I don’t want to throw him in a grind right now,” Granato said.

The Sabres on Wednesday also assigned defenseman Casey Fitzgerald to the Amerks.

Meanwhile, Granato said he needed to talk to Okposo and Tuch about potentially returning Thusday. The wingers started practicing Tuesday after leaving protocol.

“They look good out there,” Granato said.

The rosters for the 2022 NHL All-Star Game on Feb. 5 in Las Vegas will be announced tonight during the 6 p.m. edition of “SportsCenter” on ESPN.

Defenseman Rasmus Dahlin, 21, might be the Sabres’ most worthy candidate. The Swede has compiled six goals and 22 points in 35 games while averaging a team-high 23 minutes, 56 seconds of ice time.

“Everybody’s talked about how prolific he is, and he is … but he hasn’t been to that level yet, and so if he gets a chance to do that, it’s much like a player from the American League getting called up for the first time,” Granato said. “It’s whole other level. A world of confidence can come from that type of experience and being put in that type of a category.