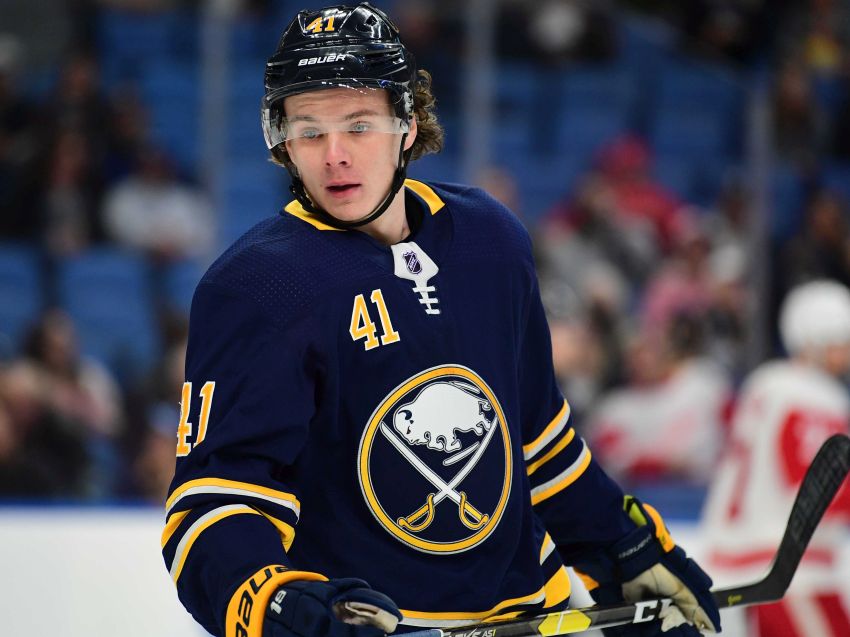 BUFFALO – By late October, as Sabres prospect Victor Olofsson closed a stellar month in which he scored five goals and 15 points, a recall to the NHL felt inevitable.

But instead of summoning Olofsson, 23, from the Rochester Americans right away, the Sabres left the slick Swedish winger in the AHL for almost six months.

“I feel like I’ve developed throughout the season,” an excited Olofsson said prior to Thursday’s 5-4 overtime loss to the Detroit Red Wings inside KeyBank Center, his NHL debut. “Just to adjust a little bit to the North American style, I feel a lot more confident.”

When the Sabres recalled Olofsson on Wednesday after 64 AHL appearances, his 27 goals and 60 points both led the Amerks. He became the 500th player to ever play for the Sabres.

“I’m good enough to play up here,” said Olofsson, who has spent nearly the entire season playing beside center Rasmus Asplund and Danny O’Regan in Rochester. “This is going to help me out for next year, too.”

He added: “I was excited. It’s a dream come true for me. This is what I’ve been working for my whole life.”

Why recall Olofsson now? Opponents just shut out the Sabres four times in a nine-game stretch. Couldn’t he have helped earlier?

“We wanted to make sure his development was in a good spot,” Sabres coach Phil Housley said. “Obviously, at this point in the season, we’re going to give him an opportunity. But that was part of his developmental plan. It’s good that he had created a lot of good chemistry with his linemates.

The Sabres think so highly of Olofsson he skated at left wing on the top line Thursday beside center Jack Eichel and Sam Reinhart and also on the No. 1 power play unit.

Olofsson might be a rare draft gem unearthed by the Sabres. Former general manager Tim Murray picked him in the seventh round in 2014, 181st overall.

How rare is it for a late-round pick like Olofsson to even get a cup of coffee with the Sabres? Only one of their seventh-rounders in the last 13 years – defenseman Brady Austin – has played for them. Austin earned a five-game look in 2016-17.

Olofsson, whose 27 goals topped the Swedish Hockey League last season, could have a chance to stick for a long time.

“He’s probably got the best shot I’ve ever seen in my whole life,” the rookie said. “It’s unbelievable.”

He added: “I’m going to give him the puck on the power play.”

Off the ice, Dahlin said “everyone loves” Olofsson.

“He’s an unbelievable guy,” Dahlin said. “He’s worked so hard. He really deserves to be here. He’s one of a kind. He’s a great guy in the locker room.”

In a dreary season, the Sabres can at least show off some of their best prospects over the final week.

“It’s an exciting time for them,” Housley said. “The youth and energy is going to be important these last games.”

Prior to Thursday’s game, the Sabres sent winger Tage Thompson to the Amerks. Thompson, 21, was scheduled to join the team for the playoffs.

Apparently, they want to give the youngster a head start.

Thompson, an offseason acquisition from the St. Louis Blues, hasn’t played in the AHL since a 30-game stint with the San Antonio Rampage last season.

He compiled seven goals, 12 points and a minus-22 rating in 65 games with the Sabres, moving in and out of the lineup.

Sabres defenseman Jake McCabe, out the last 12 games with an upper-body injury, skated with his teammates Thursday morning and is now day-to-day, Housley said.

McCabe said he wants to practice a couple times before playing. The Sabres have five games left.

Winger Scott Wilson was the Sabres’ only healthy scratch.

The Sabres also recalled defenseman Matt Tennyson before the game.