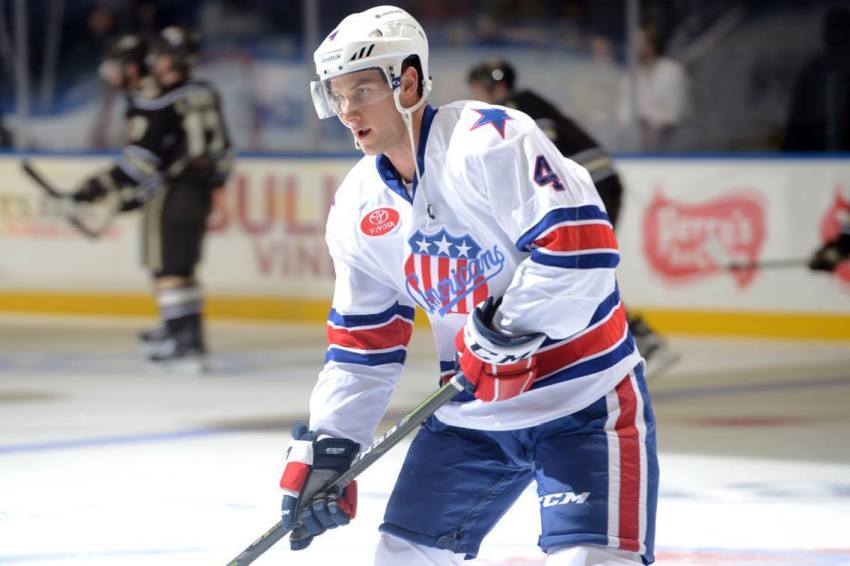 BUFFALO – Had Taylor Fedun been healthy enough to participate in training camp, then perhaps the Sabres would’ve recalled the high-scoring defenseman earlier this season.

But Fedun, who made his Sabres debut Thursday, fractured his foot in April playing with the Utica Comets, the Vancouver Canucks’ AHL affiliate. The Princeton product didn’t begin skating again until the day before training camp started, Sabres coach Dan Bylsma said.

So while Fedun, 28, participated in meetings with his new team, he stayed off the ice until Oct. 1, missing the entire preseason slate. Fedun said he was still behind a week or two following his assignment to the Rochester Americans days later.

Fedun eventually “got his game underneath him,” Bylsma said.

“Last three weeks he’s been very good for us, a smart defender, compete level (is) high, a puck mover,” Bylsma said Thursday prior to the Sabres’ 4-1 loss to the Tampa Bay Lightning at KeyBank Center.

Fedun has been one of the AHL’s best defensemen, compiling two goals and 12 points in 14 games. The Edmonton native had a four-point game last Friday.

Fedun skated beside Justin Falk, his partner in Rochester. He also played on the second power-play unit, assisting on Cody Franson’s second-period score, the first goal from a Sabres defenseman and the second unit all season.

“It makes for a much more seamless transition when the message is the same down there,” Fedun said. “You don’t have to come up here and deal with different systems and nerves all at once. It’s definitely a plus.”

The Sabres summoned Fedun on Thursday morning after sending defenseman Casey Nelson to the Amerks on Wednesday. Nelson, 24, has zero points and a minus-4 rating in eight games. The rookie was clearly struggling in his limited minutes.

Fedun, who signed a one-year, two-way contract July 1, has 13 NHL games under his belt. He has also played for the Canucks, Edmonton Oilers and San Jose Sharks, compiling two goals and eight points.

Most defensemen summoned from the AHL don’t have notable numbers. Why has Fedun been so productive?

On the surface, it might look like a season-killing injury for the Lightning. Two-time 50-goal scorer Steven Stamkos could reportedly miss four months after tearing his lateral meniscus in an innocent-looking play Tuesday in Detroit.

“You know what we have to do, you’ve got to take your head out of the sand, dig your heels in and march on,” Lightning coach Jon Cooper said Thursday morning. “Unfortunately, this has happened to us before and the guys have found a way.”

“We just got to do it again,” Lightning defenseman Victor Hedman said. “No one’s going to feel sorry for us come game time.”