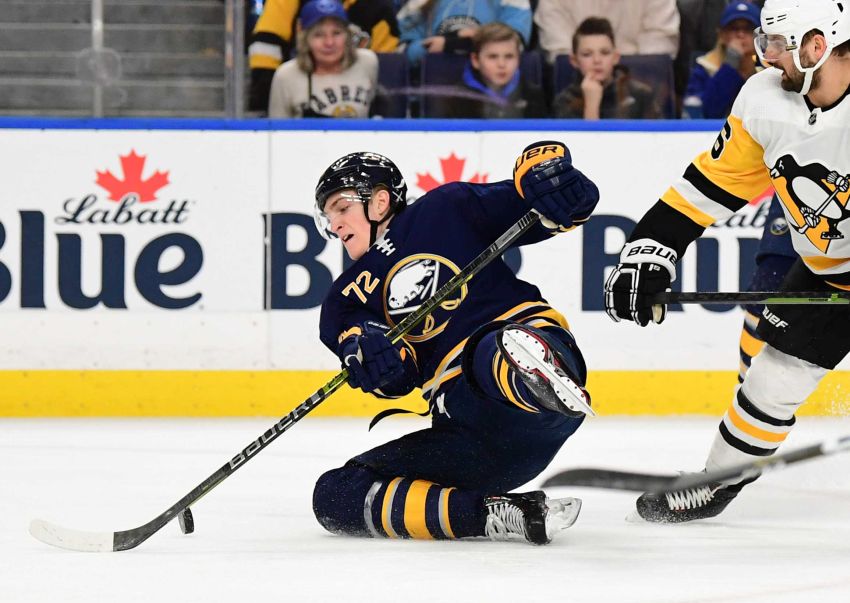 TORONTO – Tage Thompson said he views his development as a marathon, not a sprint. Having played only 97 NHL games, the Buffalo Sabres winger understands he’s raw.

“Everyone’s got their own path,” Thompson said prior to Saturday’s 5-2 loss to the Maple Leafs. “It’s going to take a little bit of time. You never want to rush into things.”

So Thompson, 21, has embraced the Sabres’ plan for him. While they’ve kept him in the NHL all season, his opportunities have sometimes been limited.

Early in the campaign, the Sabres scratched him seven out of nine games. After months of regular duty, he has sat out twice in the last month, including Tuesday’s 5-2 road loss to the Philadelphia Flyers.

“I don’t think they’re doing it to punish you,” Thompson said of getting scratched. “They’re not angry at you. It’s to help you and help my development and help the team as well. That goes back to the marathon not a sprint part. They have the best interest out for me. I trust them, I trust their decision making.”

At times during his first season in Buffalo, Thompson has showcased the talents of an elite power forward.

But after scoring four times in six games after returning to the lineup in November, he has mustered just three goals in 36 outings.

The former first-round pick possesses a lethal shot and speed. Once he learns how to better utilize his 6-foot-6, 205-pound frame – he mentioned moving his feet and protecting the puck – his consistency should improve.

“When I’m doing those two things, using my body, that’s where you see me holding on to the puck a little longer, making plays,” said Thompson, a big piece of the Ryan O’Reilly trade with the St. Louis Blues.

In Friday’s 4-3 overtime win against the Pittsburgh Penguins, Thompson displayed strong chemistry on a line beside center Casey Mittelstadt and Scott Wilson.

The Sabres’ plan for Thompson now includes a possible trip to Rochester. In a paper move on Monday, the Sabres sent him to the Americans, making him eligible for the AHL playoffs.

“When the time comes, we’ll cross that bridge,” Thompson said of going to the AHL, a place where he hasn’t played since last season. “But right now, my focus is here.”

Thompson played 10 AHL playoff games with the Chicago Wolves in 2016-17 after leaving UConn.

Thanks to the Sabres’ late-game comeback and winger Conor Sheary’s exploits in Friday’s thrilling victory, goalie Linus Ullmark’s 41-save effort almost got overshadowed.

Ullmark, 25, was terrific all night, especially early as the Penguins pumped 33 shots on him in the opening 40 minutes.

But Housley started Ullmark against the Leafs.

“We just felt the play of Linus last game deserved to get him back in the net,” Housley said.

It was the first time Ullmark started games on back-to-back days this season.

Notes: The start of the game was delayed about nine minutes because a pane of glass had to be replaced. … The Sabres made one lineup change Saturday, inserting defenseman Marco Scandella, who missed Friday’s game with an upper-body injury, for Matt Hunwick. … The Leafs scratched former Sabres winger Tyler Ennis so newcomer Nic Petan could play.