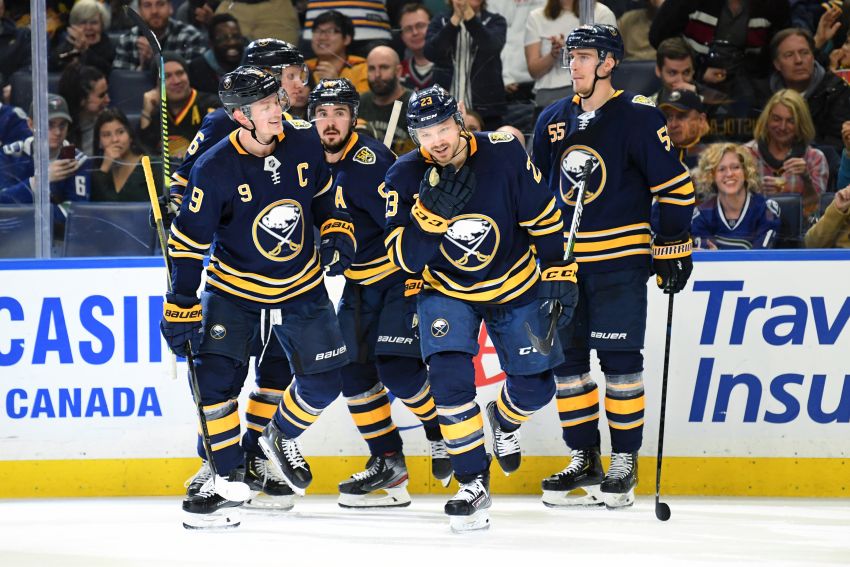 BUFFALO – Long before he developed into a terrific net-front presence in the NHL, Sabres winger Sam Reinhart operated from the circle on the power play.

“It’s a pretty normal spot,” Reinhart said after scoring a power-play goal from the left circle in Saturday afternoon’s 6-3 loss to the Vancouver Canucks inside KeyBank Center.

After moving back there earlier this month, Reinhart has looked comfortable, scoring on two one-timers.

Those goals, believe it or not, are the Sabres’ only power-play scores in their last nine outings.

After converting one of their three chances Saturday, Sabres are just two of 23 over the last nine games. Still, they’ve scored twice in their last seven opportunities.

Before Reinhart’s goal Jan. 4, they had gone scoreless in 16 tries.

Against the Canucks, the Sabres’ power play looked dangerous, creating momentum in addition to scoring.

In their first try, the Sabres buzzed around goalie Jacob Markstrom, nearly opening the scoring. After that power play expired, they held the puck in the zone before defenseman Brandon Montour scored from the left circle 8:44 into the game.

“The first one doesn’t go as a power-play goal, but it was certainly (one),” Sabres coach Ralph Krueger said. “Like I’ve told you, it sets the confidence level of our team offensively. It was a good finish then to a long power play in the zone.”

He added: “The power play was moving the puck well.”

With Reinhart in the circle, Krueger has been utilizing 6-foot-4, 220-pound defenseman Rasmus Ristolainen at the front of the net. He said the Finn’s presence there “changes the game.”

“(It) opens up the opportunities to shoot and also seems to increase the hunger for shooting,” he said.

The Sabres’ special teams have often doomed them this season. In addition to their often weak power play, their penalty killing has been sputtering in recent weeks, allowing multiple goals some games.

But on Saturday, the Sabres, who are usually a strong five-on-five team, killed both of the Canucks’ power plays.

After sitting out four straight games as a healthy scratch, Sabres winger Evan Rodrigues returned Saturday, his first appearance since he reportedly requested a trade.

“I felt good,” said Rodrigues, who registered one shot on goal and a minus-1 rating in exactly 10 minutes of ice time. “I played like I usually do.”

In the second period, Rodrigues, who has scored zero goals in 25 games this season, missed the net from the slot.

“I tried to pick a corner, he said.

Notes: In the second period, officials reviewed a shot by Vancouver winger Brock Boeser to determine if it went in the net. After a lengthy review, the no-goal call on the ice stood. Replays showed the puck was perhaps a foot or two over the net. … Former Sabres defenseman Tyler Myers visited Buffalo for the first time as a member of the Canucks. Myers, 29, signed a five-year, $30 million contract with Vancouver on July 1. … Winger Michael Frolik played his first home game with the Sabres. … The Sabres play a road game against the Detroit Red Wings at 5 p.m. today.