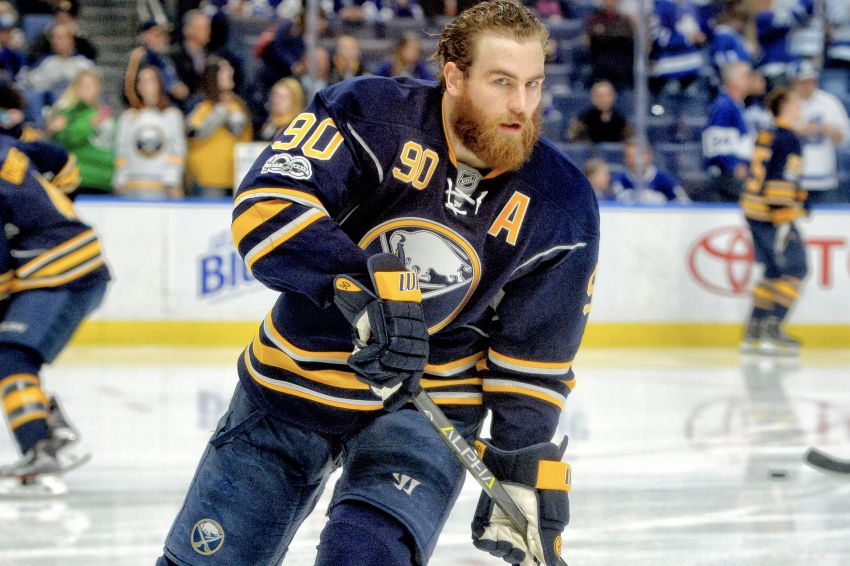 Ryan O’Reilly was due a big bonus Sunday. ©2018, Micheline Veluvolu

BUFFALO – If the Sabres pay Ryan O’Reilly his $7.5 million bonus by midnight, the dynamic of any potential trade for the center would change, general manager Jason Botterill said.

Speaking earlier in the day on a conference call, Botterill explained based on his conversations with other teams, paying the money would mean the Sabres have a new asking price.

Given how the Toronto Maple Leafs beefed up Sunday, signing star center John Tavares to a seven-year, $77 million contract, the Sabres might need O’Reilly more than ever.

The Sabres had to pay O’Reilly his bonus, part of his seven-year, $52.5 million contract, by Sunday.

More on the signings:

“We’ve always wanted to bring Scott back to our group,” Botterill said. “We just didn’t want to go through the salary arbitration process. We just wanted to work more in just our team salary structure. … A big reason we made this trade earlier in the season is we want Scott’s tenacity on the forecheck, the fact that he’s played in playoff games.”

Botterill said the Sabres wanted to have a strong No. 3 goalie in the organization.

“You look at Scott’s background, what he’s accomplished in the American Hockey League, and then especially this past season, getting more NHL experience, we felt it was great to have a goalie with NHL experience to come into that role, but also, too, with his age, we feel that there’s growth there,” he said.

Like Wedgewood, Hickey, 22, should start next season in the AHL.

“Brandon felt very comfortable becoming a part of the Sabres organization,” Botterill said. “You just look at the way he plays, his ability to create, we feel he’s a guy who can fit into what we’re trying to accomplish here.”

If Hickey waited, he could’ve become a free agent Aug. 15.

While the Sabres traded for Conor Sheary on Wednesday, they still look thin on the wing. Some speed and scoring to flank their centers would help.

“We just didn’t see there was a fit that worked well for us, for our team, especially with some the term that was going out with some of the contracts out there,” Botterill said. “We’re excited about some of the players that we are bringing into our organization from that aspect and we’ll continue to look to see who that is.

“But as much as we think that, ‘Hey, maybe we could add a little bit more scoring to the wing,’ we’re also very happy with the strength that we have down the center right now.”