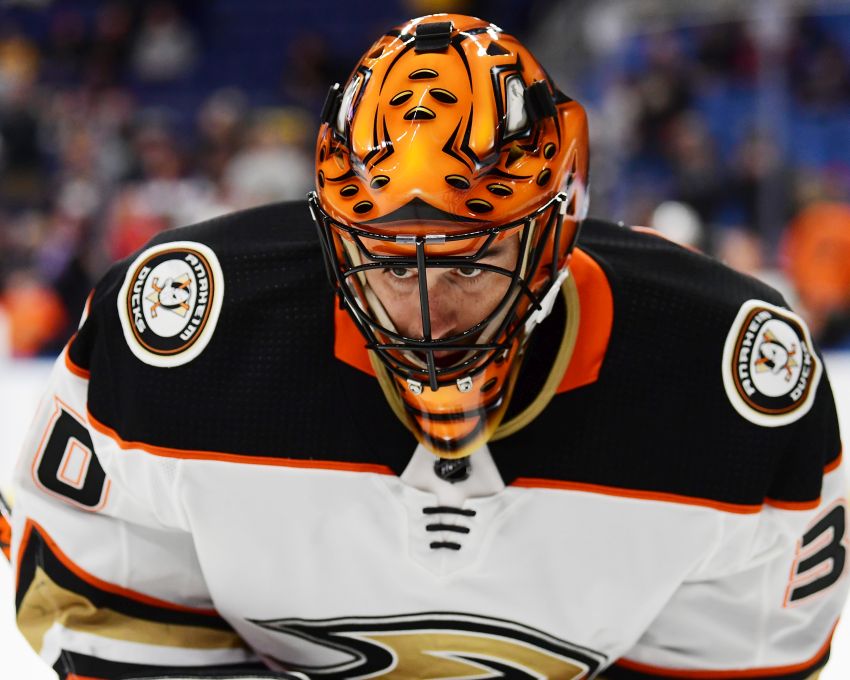 BUFFALO – On Thursday, the Sabres will celebrate “2000s Night,” bringing back Daniel Briere, Brian Campbell and some other key figures from their wildly successful 2005-06 and 2006-07 teams that reached the Eastern Conference final.

Ryan Miller, the star goalie those seasons, can’t make it. As the only active NHL player left from those popular clubs, he will be in Anaheim for the Ducks’ game against the Calgary Flames.

“I’m actually going to miss that group of guys who are going to be here in a few more days,” Miller said after stopping 31 shots in Sunday afternoon’s 3-2 win over the Sabres. “I’m happy to be playing and not miss it for some other reason.

“But I’ve got a little FOMO (fear of missing out). There’s a lot of guys on that list. I’d like to be back with them in Buffalo and just have some fun.”

Miller, 39, had plenty of fun Sunday in what could be his final game at KeyBank Center.

Having played in Friday’s 5-4 overtime loss to the Toronto Maple Leafs, it seemed unlikely Miller, now a backup, would start again Sunday.

But Ducks coach Dallas Eakins realized the importance of the game to Miller, who played 11 seasons for the Sabres.

“This is a special place for him,” he said. “We talked about that before the game. This is an important game for us as a team always first. But I’m a big believer … if you’ve spent 11 or 12 years in an organization, that is something that’s put on the team.

“And like we talked about before the game, this is a game we want for Millsie. That’s what we want. So it’s good to see Millsie get that one.”

The fans knew Sunday could be their last opportunity to see Miller play up close. They cheered when he was announced in the starting lineup and again when he was named the game’s third star.

“The fans in Buffalo have always been great,” he said.

Sunday was the sixth time Miller has faced the Sabres since they traded the former Vezina Trophy winner to the St. Louis Blues almost six years ago.

Miller earned his 385th NHL victory, moving him into a tie with Mike Vernon for 15th place on the all-time list.

Former Buffalo defense prospect Brendan Guhle, 22, has endured two injuries since the Sabres traded him to the Ducks almost a year ago, battling an oblique problem last season before a lower-body injury sidelined him earlier this campaign.

Eakins, of course, doesn’t want a young player to get hurt. Still, he said Guhle will be better off in the long run for having experienced the adversity this season.

“Dealing with the injury has been hard on him, on his head a little bit, but necessary,” Eakins said prior the game, shortly after the Ducks recalled Guhle.

He added: “He’s had to walk through some manure here this season, and I always think that’s great. I think his play of late has really paid off by going through that.”

Guhle cracked the Ducks out of training camp before getting hurt Oct. 10. He returned too early – just two weeks later – according to Eakins.

“That was my mistake,” he said. “We should’ve sent him to San Diego to get some reps before putting him in the lineup here.”

The Ducks eventually sent Guhle to the San Diego Gulls, their AHL affiliate, in early November and again in December.

Sunday was his first NHL appearance since Dec. 6.

“He’s played excellent (with San Diego) over the last month,” Eakins said. “This call-up has probably been overdue for him. So he’s earned the recall.”

Guhle has played 19 NHL games this season. The Sabres traded him and a first-round pick to the Ducks on Feb 24, 2019 for defenseman Brandon Montour.

A Sabres forward hadn’t played as much as Eichel since Miroslav Satan skated 28:40 on Nov. 15, 2002 against the Toronto Maple Leafs.

The Sabres recalled goalie Andrew Hammond from the Rochester Americans before the game because Carter Hutton was unavailable for what the team called “family circumstances.”

Update: The Sabres sent Hammond back to Rochester today.

They also summoned defenseman Lawrence Pilut after a one-day trip to the minors.