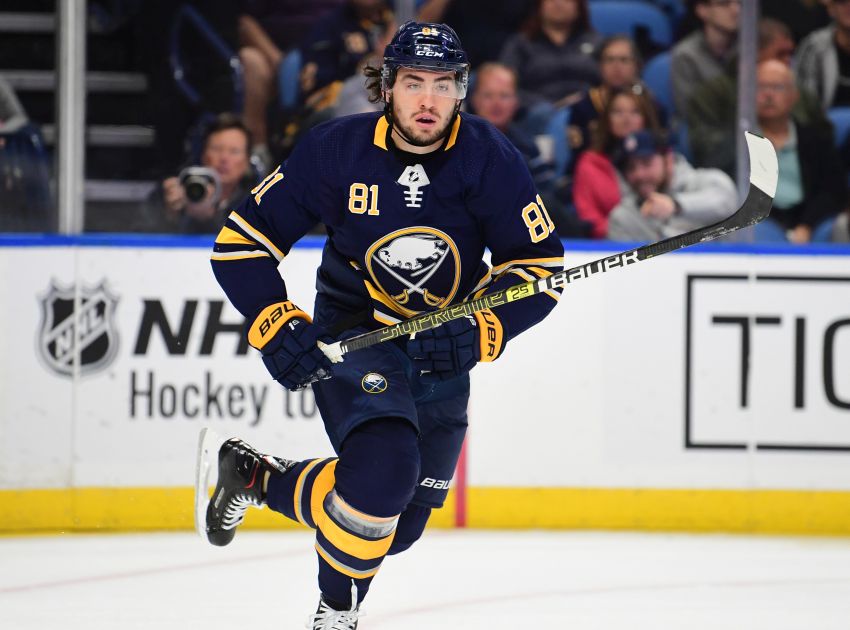 BUFFALO – In his 91-game NHL career, Remi Elie has compiled seven goals and 21 points. The Dallas Stars utilized him as a checker, a role he continued Saturday as a fourth-line winger in his Sabres debut.

“When he gets up the ice, he sees plays,” Housley said prior to Saturday’s tilt inside KeyBank Center. “He’s got good vision, he’s a really good passer, has a heavy shot. But I think he just sees a game like an offensive forward, where it’s off his stick before he gets it and it’s a flat pass. I just think he processes the game the right way.”

Housley’s words are meaningful to Elie, who skated at left wing beside center Evan Rodrigues and Jason Pominville against the New York Rangers.

“He believes I can bring a lot to this team and help this team win games,” Elie said.

So right away, Elie said he called his agent, who explained the waiver process to him.

“(He) just told me to keep my head up and relax and everything’s going to come back to normal,” Elie said. “(He said), ‘Let me do my job and you’ll go somewhere else.’”

The 6-foot-1, 215-pound Elie said that his job is performing as a power forward.

“A guy that’s very strong on the forecheck that finishes my checks and likes doing battles down low and just bring offense to the team, energy,” he said.

Like Housley, Elie thinks he can showcase more offense. After Dallas drafted him in the second round in 2013, 40th overall, he averaged 29 goals over his final two junior seasons.

“As a rookie, I just (had) to get to know the league, how you play in this league,” Elie said. “Now I’m just more comfortable and I (have) more confidence than I did last year. I think my game’s going to keep improving every year.”

Elie moved in because winger Vladimir Sobotka is day-to-day after suffering an upper-body injury in Thursday’s 4-0 loss to the Boston Bruins.

David Quinn, who coached Rodrigues and Sabres center Jack Eichel at Boston University, is in his first season leading the Rangers.

“It’s a little weird,” Eichel said. “He’s a friend to me, he’s a mentor and he’s been pretty close to me even through my first few years in the NHL. He was so good to me at BU and we have such a good relationship, but I think we’re all competitors, right? …

“I’m just so happy for him. I think he’ll do great. He can win all the games he wants except for when he plays us. Other than that, I wish him all the best.”

Quinn said he sees “a maturity level that continues to grow” in Eichel, who was named captain Wednesday.

“He’s 21 years old,” he said. “I knew eventually he’d be named captain of the Sabres. I just wasn’t sure when it was going to be. He’s a guy that plays with passion and he’s got a great personality and a great presence about him.”

Rangers center Filip Chytil went to the locker room in the second period but returned after Sabres center Patrik Berglund hit him in the head.

“I had a big problem with the hit,” Quinn said. “He didn’t have the puck and they hit him in the head. From what I’ve been told already, the league is already looking at it.”

Former Sabres coach Lindy Ruff is in his second season as a Rangers assistant. Ruff played for the Rangers from 1989 to 1991.

Notes: Saturday marked the Rangers’ first visit here since Feb. 2, 2017. They did not play here last year because the Sabres had home status in the Winter Classic at Citi Field. … Sabres winger Zemgus Girgensons moved up from the fourth line to a scoring trio beside center Casey Mittelstadt and Kyle Okposo. … The Sabres also scratched defensemen Zach Bogosian (lower body) and Matt Tennyson (healthy).