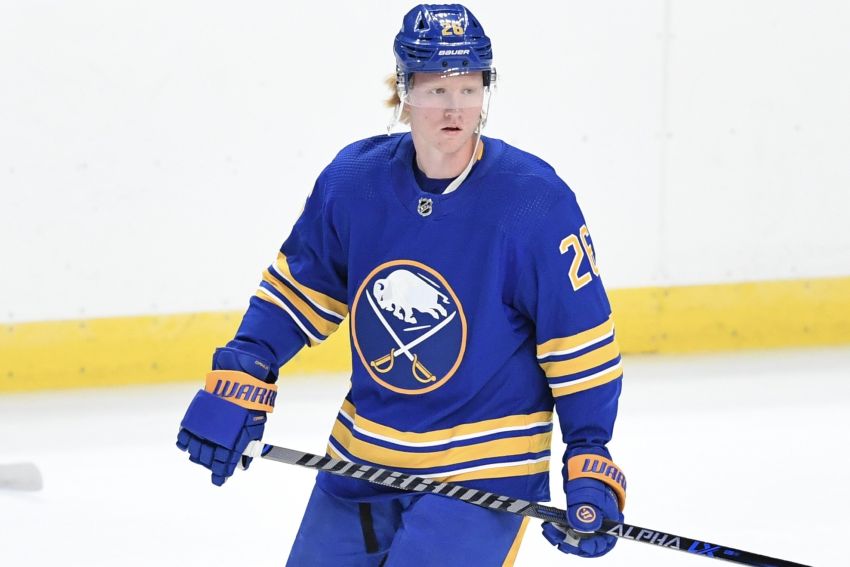 “Absolutely amazing,” Granato said of Dahlin following the Sabres’ 3-2 loss inside KeyBank Center. “Something that goes wrong, he elevates.”

The rest of the team did not elevate after a slew of early mistakes, and the Sabres found themselves in a huge hole.

Granato, as he has been recently with a light schedule and a slew of players sidelined, utilized Dahlin shift after shift, skating him a season-high 28 minutes, 47 seconds, the second-highest total of his career. It was the third straight game in which Dahlin has played more than 27 minutes.

“It was just shift after shift for him tonight that he was good,” Granato said. “Every possession he seemed to make something happen through five guys. I mean, they backed off quite a bit defensively when he had the puck which is, they had five paying attention to him and he still made plays.”

Granato said on Wednesday that Dahlin, 21, has “been unbelievable” handling the heavy workload.

Of course, Dahlin, the first overall pick in 2018, seems to have every mistake scrutinized. The ultra-talented Swede often puts too much pressure on himself. Some observers believe he should’ve morphed into one of hockey’s elite defensemen by now.

But Granato likes what Dahlin has been showcasing. Dahlin, who has often said he likes more on his plate, embraces the challenges that accompany the extra ice time.

“We can critique his game but there’s not a team in this league that wouldn’t love having him on their team,” Granato said Wednesday. “He is competitive, ultra-competitive. That’s where a lot of his mistakes are made, he just tries too damn hard sometimes, wants to plow ahead. He makes one mistake he wants to make up for it immediately, which is the second mistake coming because you’re forcing it.

“But love the competitiveness, he’s found a balance and a rhythm.”

Entering Thursday’s game, Dahlin had compiled six goals, 21 points and a minus-9 rating in 33 games while averaging a team-high 23 minutes, 55 seconds of ice time. His point total was tied for second on the team with winger Kyle Okposo, one behind center Tage Thompson.

In Saturday’s 4-3 overtime loss in Boston, Granato said the Bruins went hard after Dahlin, and he responded. In 27 minutes 58 seconds of ice time, Dahlin registered one assist, a minus one rating and a team-low Corsi For of 25 percent.

Granato said Dahlin knows he can reach a much higher level in his play.

“We have made it known to him and he feels that we need more out of him because he’s capable of it and our team needs it,” Dahlin said. “He’s taken more responsibility as a result. He’s closing quicker in the defensive zone. We talk a lot about getting pucks back faster and he takes that to heart.”

The Sabres on Thursday morning reassigned forward Ryan MacInnis from the Rochester Americans to the taxi squad and later elevated him to the active roster.

MacInnis, 25, played his first game for the Sabres, skating at left wing beside center Cody Eakin and John Hayden.

The 6-foot-4, 201-pound MacInnis has recorded six goals and 16 points in 26 games with the Amerks this season. He scored the Amerks’ only goal in Wednesday’s 2-1 loss to the Syracuse Crunch.

“He’s been a centerman most of his career, but because he has a pretty high skill level, hockey sense, feel for the game, he’s played a lot of wing in Rochester and done real well there,” Granato said on a Zoom call this morning. “The coaches there have felt he can slide into that slot easily. So I’m excited to see him.

“I’ve watched him since he was 16 years old … so I know Ryan and I think he has found a new level in his game just within the last few months. I think the guys in Rochester, coaching-wise, have done a real good job with him.”

The Sabres signed MacInnis to a one-year, two-way contract July 30. He spent time on the taxi squad last week.

MacInnis, the son of Hall of Fame defenseman Al MacInnis, played 26 games for the Columbus Blue Jackets over the past two seasons, compiling one assist.

“It is encouraging that he was out there,” Granato said on a Zoom call prior to the game. “Keep in mind, it’s only a pregame skate, it’s non-contact. If it was a regular practice, he would not have been out there today.”