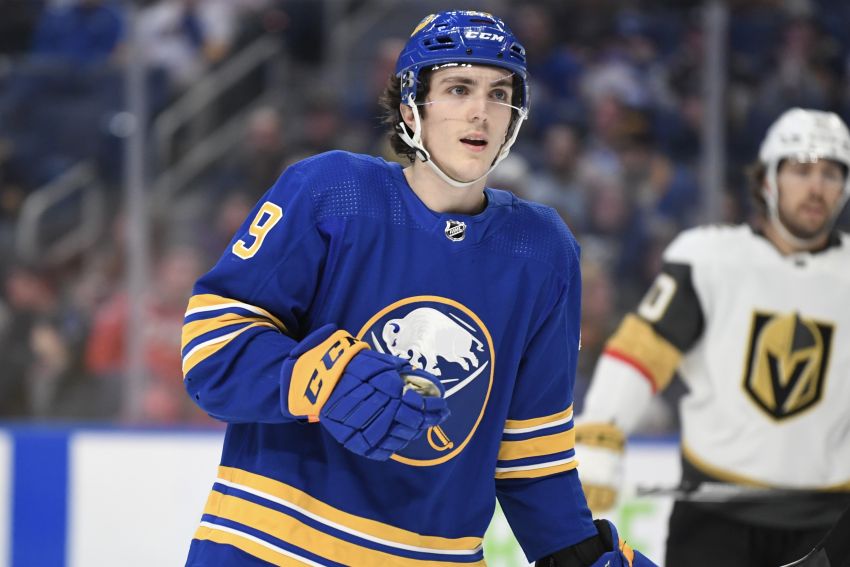 Peyton Krebs could return to Rochester for the playoffs. ©2022, Micheline Veluvolu

The Sabres assigned the rookies to the Rochester Americans and “recalled” them in a paper transaction.

Right now, the Amerks, despite often using a patchwork lineup because of injuries and recalls, rank fourth in the North Division. If the postseason started today, they would play the Syracuse Crunch in a best-of-three first-round series.

“It would be great if Rochester was able to be in a playoff spot, have those guys available with the other young players that we’re pretty excited about down there,” Sabres general manager Kevyn Adams said Monday inside KeyBank Center. “And in our best-case scenario, maybe they could go on a run and do it together. So that’s why we wanted to make sure we did that.”

Adams said Krebs, Fitzgerald and Samuelsson were all excited about potentially participating in the AHL playoffs.

“(That) says a lot about the character of those three, because that’s not always the case, I can tell you,” Adams said.

Adams said Fitzgerald, out the last four games with an upper-body injury, has been cleared to return.

Sabres winger John Hayden has entered the NHL’s COVID-19 protocol after testing positive for the virus while the team was in Vancouver over the weekend.

So Hayden had to remain in Vancouver after the Sabres flew home following Sunday’s 3-2 overtime win against the Canucks.

“He feels fine, asymptomatic,” Adams said. “Like, (he) was just surprised, obviously. But hopefully he can test out. There’s certain criteria with numbers and back-to-back days of testing.”

Adams said he wasn’t surprised teams showed interest in defenseman Robert Hagg, who on Sunday was traded to the Florida Panthers in exchange for a sixth-round draft pick in 2022.

“Relatively cheap when it comes to a quality defenseman that can play a role, especially in the playoffs,” Adams said. “Physical, shot blocker, great person, character, the whole deal. That’s the hard part of this job. … You’re going to one of the elite teams that has a chance to win the Stanley Cup, but on the human level, you hate that phone call and saying goodbye.

“Yeah, I think when I looked at our back end and you look at potentially who is coming, you also want to do the right thing for everyone, the player and the organization. That’s why we made that move.”

Adams said the Sabres had some serious conversations with teams that wanted to use their open salary cap space to make a deal happen.

“In fact, on our end, we had kind of agreed on how it would work,” Adams said. “Then it didn’t end up panning out from the other two teams. So there’s a lot of work that goes into these. That’s all part of it. That was something we did and we’re open to and we were hoping is there a way to take advantage of the cap space. But you need other teams to be able to do it with you.

“So that was one thing (that) absolutely planted some seeds in terms of the offseason. And what I mean about that is conversations about potential players that are on teams that maybe we feel are a fit here but the team said, ‘Well, we really need this guy or want this guy for the rest of the season and the playoffs, but let’s talk about it in the offseason.’”