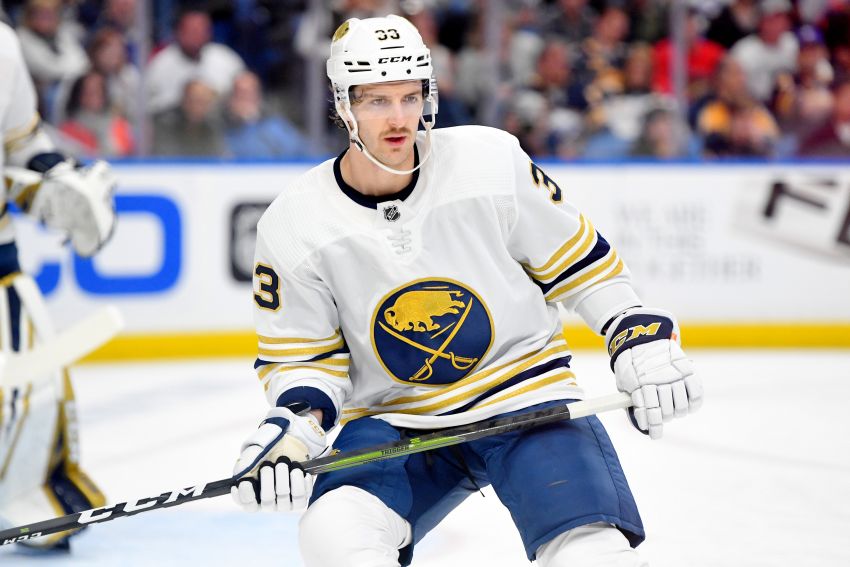 BUFFALO – Colin Miller’s stint in the press box likely won’t last long. It wouldn’t be surprising if the Sabres defenseman returns to the lineup Saturday.

But Marco Scandella’s return from a lower-body injury Thursday forced Sabres coach Ralph Krueger to make a tough decision and sit out a regular defenseman.

Miller was the odd man out against for the 5-4 overtime loss to the Carolina Hurricanes.

Right now, the Sabres have eight healthy defensemen. Two must be scratched.

Krueger, however, has a good problem. Defense depth is always at a premium, especially during busy stretches like the Sabres are beginning.

The Sabres play three games in four days, five in eight days and 10 in 17 days.

“With the games that we have coming up, we’re going to need the depth on defense, I’m quite certain of that,” Krueger said inside KeyBank Center. “We can just make a call game-to-game.”

That could mean Krueger rotates some defensemen in and out.

Miller, 27, said he experienced a similar situation during his two-year stint with the Vegas Golden Knights.

“We had a lot of defensemen in Vegas, so I guess it’s a rotation and that,” he said. “Just be ready to play when you’re called upon.”

Coaches, of course, like having so many guys fighting for spots.

“We like the healthy internal competition,” Krueger said. “I think it creates a healthy atmosphere because of the professionalism of the guys who have had to take that difficult role of watching. … They’re keeping themselves ready to play and still supporting the group.”

Krueger said he would have “no problem” tinkering with the lineup and dressing 11 forwards and seven defensemen.

“We’ve had a couple times this year where somebody fell out early, like when (Vladimir) Sobotka went down (Friday),” he said. “It’s a little more difficult bringing seven D in. With 11 forwards, you really have everybody in the game.”

Scandella, one of the Sabres’ biggest early-season surprises, has been paired with Henri Jokiharju again.

Miller has compiled zero goals, four assists and an even rating while averaging 18 minutes, 41 seconds of ice time in 17 games this season.

The Sabres acquired Miller from the Golden Knights on June 28.

So in addition to missing Thursday’s game, Johansson will be out Saturday versus the Ottawa Senators and Sunday against the Chicago Blackhawks.

“We think it’s better to give him a few days here to rehab so we’re not planning with him for the three games,” Krueger said.

With Johansson out, Krueger moved Evan Rodrigues to center with Jeff Skinner and Conor Sheary.

While Lazar, 24, has played 247 NHL games, he has only made two appearances in the last two seasons.

Notes: Sabres defenseman Rasmus Dahlin, 19, played his 100th NHL game. Among defensemen who debuted with the Sabres, only Phil Housley, who scored 94 points in his first 100 contests, compiled more points than Dahlin’s 56. … With Johansson sidelined, winger Sam Reinhart wore an ‘A’ as an alternate captain. … Sobotka, who’s out four to six weeks with a lower-body injury, missed his second game.

Behind The Bench w/@BillHoppeNHL: A lack of scoring beyond the team’s top line is a familiar issue for the slumping #Sabres, who have lost five straight games heading into tonight’s contest against Carolina. https://t.co/AYPneSNEcK