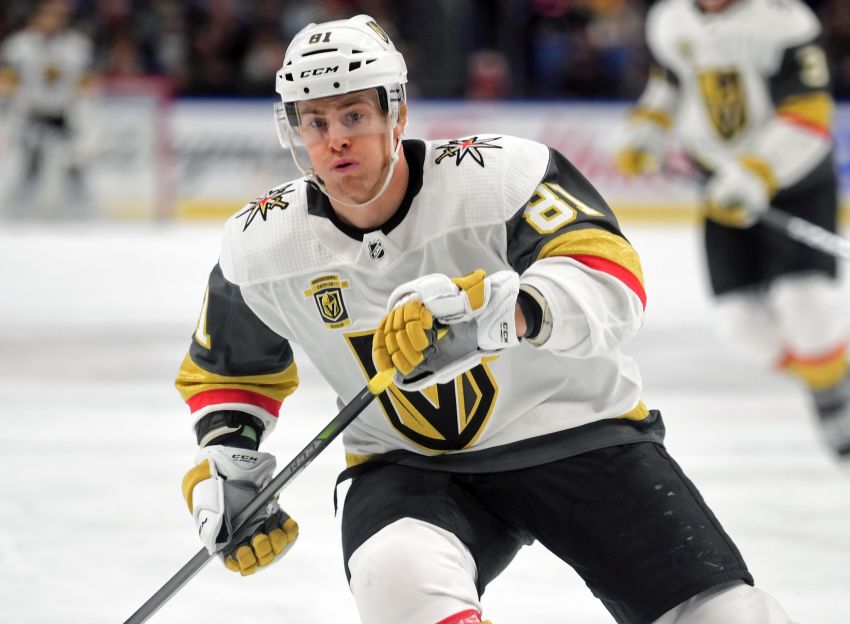 BUFFALO – After earning only four NHL appearances over his first four pro seasons, Vegas Golden Knights winger Jonathan Marchessault decided he would give himself one more year to crack the big league.

“If I didn’t make it, I was going to go to Europe, because I was getting great offers in Europe,” Marchessault said Friday inside KeyBank Center. “A lot of people do a decent living over there, do a great career.”

The undersized Marchessault, who’s listed at 5-foot-9, consistently produced offense in the AHL – he had four 20-goal seasons – yet he couldn’t get more than an occasional sniff from the NHL.

“I played over 300 games in the AHL,” said Marchessault, who went pointless in Saturday afternoon’s 2-1 shootout win against the Sabres. “That’s a lot of games and four full years. It’s definitely challenging for (you mentally). It’s definitely hard and sometimes it’s tough to get out of the AHL.”

Size and style of play – Marchessault said he needs to skate on a top line – were the knocks on him.

These days, Marchessault, who is making $750,000 this season, is perhaps the NHL’s most underrated player and biggest bargain. Having compiled 22 goals and 65 points through 65 games, he’s the leading scorer on the greatest expansion team in NHL history.

The undrafted Marchessault enjoyed a breakout season a year ago, scoring 30 goals and 51 points with the Florida Panthers.

But Marchessault’s best chance materialized in Tampa Bay. He earned regular duty with the Lightning in 2015-16, his third year in the organization, scoring seven goals in 45 games.

Marchessault parlayed that into a two-year contract from the Panthers.

“We signed him as a third-line guy to get a little bit more depth scoring,” said Golden Knights coach Gerard Gallant, who coached the Panthers 22 games last season.

“(Marchessault) took advantage of that opportunity,” Gallant said. “He played first line, he played power play. The next thing you know he’s putting the puck in regularly, he’s scoring goals.

“Everybody knew he had talent, it was a matter of getting the opportunity. Sure enough, he took advantage of it. He’s probably going to be a 30-goal scorer for a long time in this league.”

Marchessault said his opportunity with Florida, which left him exposed him in the expansion draft, was his only chance to be “a top-line guy.”

“I needed to take that opportunity and be more successful and I was,” he said. “So I was able to show I could be a top-two line guy in the league. I got picked up in Vegas and I just kept going. I’m never satisfied with what I’ve done. I always want more. I think that’s the mentality that I will embrace for the rest of my career.”

Ever so slowly, Sabres goalie Robin Lehner is improving in shootouts.

Incredibly, the Sabres, who hadn’t participated in a shootout since opening night before Thursday’s 4-3 win in Ottawa, have played two straight.

Lehner stopped two of the three shooters he faced Thursday. Overall, four of the eight opponents have scored on him this season.

“It’s no secret I was struggling,” Lehner said. “To be honest, I haven’t practiced it much. I just tried to let it out of my head. Yeah, you get some confidence back. I’ve got to keep working on it a little bit at a time.”

Defenseman Victor Antipin, meanwhile, sat out his second straight game. The Russian rookie had played seven straight games and 13 of the last 14.

“When we lose a game like that against Calgary (5-1 on Wednesday), there’s going to be changes,” Housley said. “We’re going to continue to change our lineup if we don’t get the result we’re looking for.”