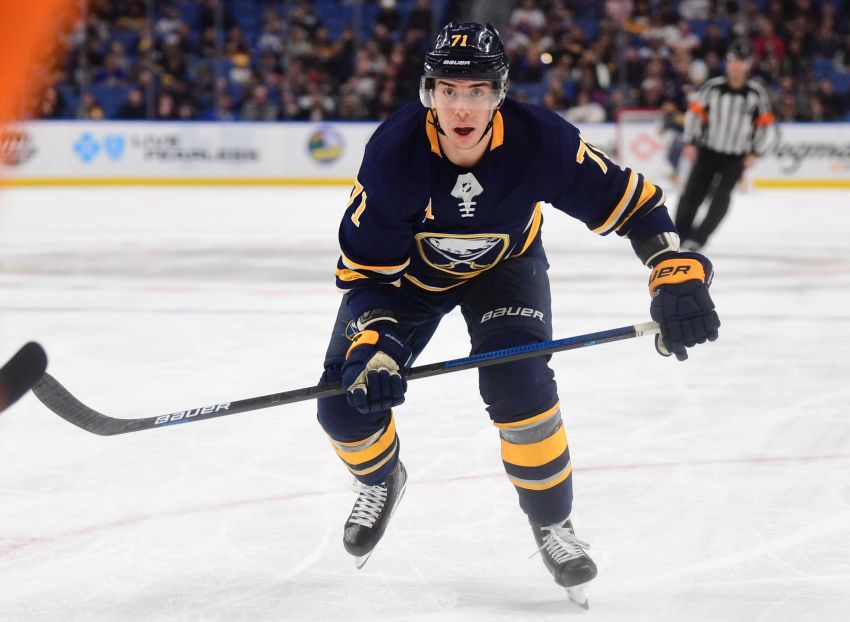 Quinn’s success at the NCAA level, of course, generated plenty of interest from the NHL. Still, Rodrigues, whose dynamic exploits nearly helped BU win a title in 2015, enjoys a close relationship with Quinn.

“You can always go into his office and talk about anything to him,” Rodrigues said prior to Friday’s 6-2 loss to the New York Rangers. “He’s very, very personable.”

So when Quinn, 52, left to sign a five-year contract worth a reported $2.4 million a season to coach the Rangers, Rodrigues said “he was a little surprised.”

“At the same time, knowing him, there wasn’t going to be many cities that took him away from Boston, and New York was definitely going to be one of them,” Rodrigues said inside KeyBank Center.

Quinn, who has former Sabres coach Lindy Ruff on his staff, has done OK in his first season, guiding the rebuilding Rangers to a 24-24-8 mark entering Friday.

While Quinn has spent most of his coaching career in the NCAA, he led Colorado’s old AHL affiliate, the Lake Erie Monsters, for three seasons, and was an assistant with the Avalanche in 2012-13. He’s no stranger to the pro game.

“When he’s being your coach and he’s in the locker room, whenever he talks, you’re definitely listening,” Rodrigues said. “He definitely commands the room. He’s just got a presence about him.”

When Quinn took over BU in 2013-14, the undrafted Rodrigues, then a junior, was starting to believe he could have a future in pro hockey after attending some NHL development camps.

“I always thought I could get drafted or go in the later rounds,” Rodrigues said. “But at the same time, I was playing junior hockey at the time. My only focus, really, was getting a D-1 scholarship, and when that happened, I was even through the roof for excitement.”

After an injury-plagued junior season, Rodrigues morphed into one of college hockey’s most lethal players as a senior in 2014-15, scoring 21 goals and 61 points in 41 games as BU fell one win short of a national championship.

“You could see the talent, you could see what he was capable of doing,” said Quinn, who compiled a 95-47-17 record at BU. “Certainly before I got there he was a really good player. It was just a tough year for a lot of people (2013-14). Right from the get-go in his senior year, he was a whole different player, arguably one of the best players in the country by the end.”

Rodrigues parlayed that dynamic campaign – he spent the second half playing beside Sabres captain Jack Eichel and Rochester Americans winger Danny O’Regan – into an entry-level NHL contract from Buffalo.

These days, having just compiled six goals over a 12-game stretch, the speedy Rodrigues is starting to showcase his slick talents more consistently.

“I believe I can be a 60-point guy,” Rodrigues said. “I’m in that spot where I can take my game to the next level offensively. … I’m on a good run here as of late. I think that’s the game I know I’m capable of, the production I know I’m capable of and want to continue to do.”

Defenseman Zach Bogosian, who ranks second on the Sabres in ice time, returned Friday after a lower-body injury sidelined him two games.