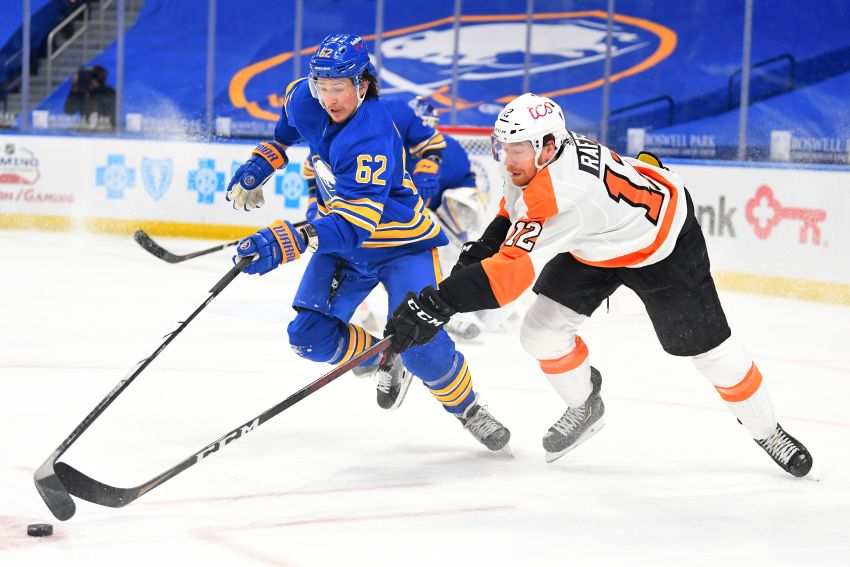 BUFFALO – Instead of letting the Sabres rest and recover in the midst of their grueling schedule, interim coach Don Granato said he has “overworked” his players.

“We’re trying to push them harder to develop harder,” Granato said on a Zoom call prior to Wednesday’s 6-1 win over the Philadelphia Flyers at KeyBank Center. “We know we have to get better. The focus has to be on that. And we have to trust that wins will follow and be a by-product of that.”

So Granato has tried to use what little practice time the Sabres have available – they played a whopping 16 games in March – to his team’s advantage.

“We moved the thought of, ‘OK, let’s just rest and maximize maybe our work-to-rest ratio on the rest side so we can maybe get the next win,’” Granato said.

Granato, who replaced Ralph Krueger on March 17, has embraced a long-term approach. He did not want the Sabres to end what had ballooned to an 18-game winless skid and quickly revert to their old ways.

He said focusing on the marathon streak “drains you.”

“We had to turn our focus to improving even if it costs us in the short term with a little bit longer practices, a lot harder practices, maybe a couple more minutes in meetings or videos or one-on-ones,” Granato said.

He added: “We want to try to get to a point where we can feel we can win any night out, and win with consistency.”

So, for example, prior to Monday’s 4-3 overtime loss to the Flyers, the Sabres’ morning skate was really a full practice.

Sessions under Granato feature plenty of teaching. He, of course, has different ideas than Krueger. His new system has forced the Sabres to play faster.

“We’ve had some pretty in-depth meetings and some really good conversation about the things that we want to do and how we want to play,” Sabres winger Kyle Okposo said. “It’s about getting everybody on the same page that way, because you don’t have (a lot) of practice time in a year like this.”

Granato said he and his staff have introduced things to the team “incrementally.”

“We didn’t want to give them too much,” he said. “To tie it in, we made sure that whatever we spoke of in a meeting or video and showed them, we actually ran drills in practice where they could get the reps to it and get some confidence that way. And that’s still a process. We can only move in increments within that process.”

The Sabres have slowly started performing better for long stretches of games. Having taken leads into the third period in each of other their last two outings, they appear close to winning for the first time since Feb. 23.

In Monday’s game, they led 3-0 before imploding late.

“We’re trying to push them harder to develop harder,” Granato said. “We know we have to get better. The focus has to be on that. And we have to trust that wins will follow and be a by-product of that.”

Granato said the Sabres plan to recall some of their prospects from the Rochester Americans before the season ends May 8.

“The timeline has not been set,” he said. “But the motor is moving for me, certainly. And I’m excited for that. I think it’s a valuable time for players to gain some experience, internalize that experience. It’s what we’re about right now.”

With rookie center Dylan Cozens sidelined by an upper-body injury, the Sabres recalled Steven Fogarty from the taxi squad prior to the game and played him at right wing on the fourth line beside center Cody Eakin and Tobias Rieder.

Fogarty scored the first goal of his 22-game NHL career 9:42 into the second period. He also assisted on center Casey Mittelstadt’s goal later in the period.

The Notre Dame product had recorded one NHL point entering the night.