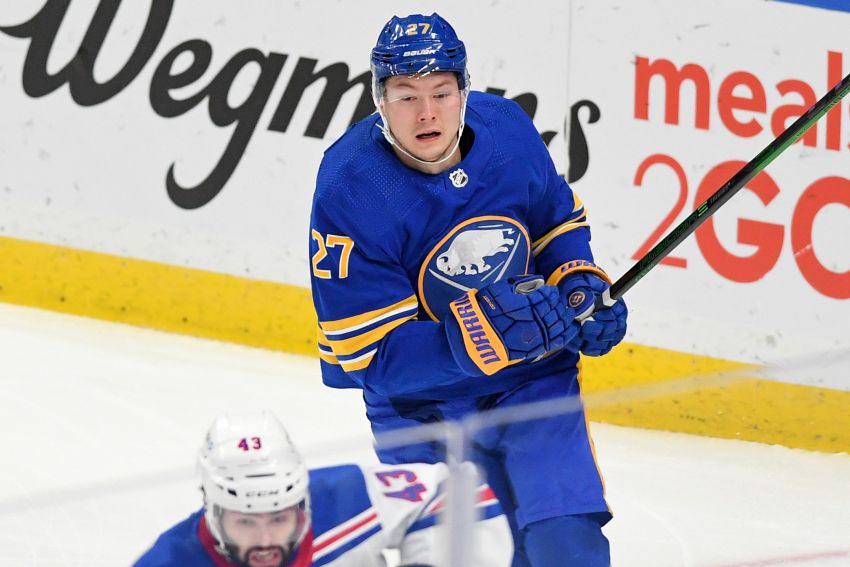 BUFFALO – Curtis Lazar relishes playing a heavy style as the Sabres’ fourth-line center and utilizing his 6-foot frame to disrupt the opposition.

“I take a lot of pride in providing that sandpaper for our team up front and trying to create room for some of our skill guys, knowing that if guys are going to go out there, then you have to deal with me,” Lazar said on a Zoom call Wednesday.

But after playing last season at 211 pounds, Lazar realized he would perform better in that gritty role if he shed some weight. So he dropped 18 pounds during the offseason. The Sabres now list him at 193 pounds.

“I’m a bigger guy, where I kind of play that heavy role, but I want to be able to move,” he said. “I’m seeing the difference in the endurance out there and the quickness, but as you can see, I’m still not afraid to throw my weight around.”

“Last year, we kind of felt there was a ceiling there of 11, 12 minutes for him,” Krueger said prior to the game. “I believe that ceiling has been raised now with his fitness level and his conditioning.”

Lazar, 25, has already reaped positive results from his transformation.

Hits can be a suspect stat, as totals vary wildly from building to building. Still, Lazar had registered 15 in seven games entering Thursday’s 3-2 overtime loss to the New York Rangers at KeyBank Center.

He had the highest hit total among forwards despite averaging 11 minutes, 53 seconds of ice time a game, the second-lowest total up front.

Lazar, of course, is still learning how to utilize his lighter body.

“Sometimes I do end up on the wrong side of (a hit), because I still am adjusting to my body,” he said. “Again, that just comes with understanding your role, especially with no fans, too. You got to get life in the building somehow, and if I can go out there and clobber a guy or kind of set the tone.”

Lazar even likes taking hits. Feeling one early, he said, helps him wake up and get him involved.

“He’s always got a smile on his face, always positive,” Montour said. “Those are guys you need.”

In other lineup news, the Sabres scratched winger Tage Thompson (healthy) for the third straight game.

Defenseman Griffin Luce has joined the Rochester Americans on loan from the ECHL’s Rapid City Rush, according to eliteprospects.com

Luce, 22, is the grandson of Sabres Hall of Famer Don Luce.

Thoughts on a strong week for #Buffalo, Jack Eichel’s start, the secondary scoring, why Dylan Cozens has looked so comfortable and more:https://t.co/8gADfsBWoX