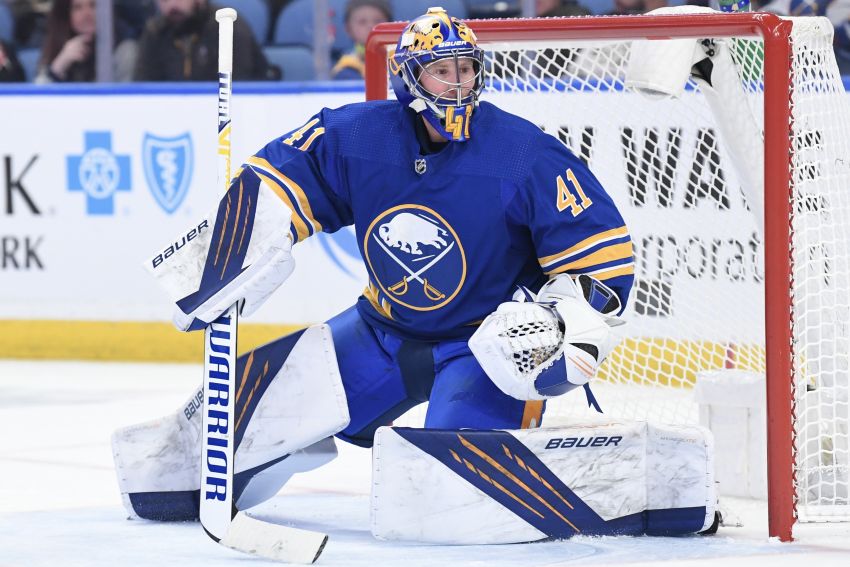 “On Day One when I saw him in shape and as serious and intent as he was, that’s all I needed to see,” Granato said of the 40-year-old, who’s beginning his first season in Buffalo. “Nothing surprised me after that.”

“I can’t say he’s exceeding expectations,” Granato said of Anderson’s scorching start following Monday’s 5-1 win over the Tampa Bay Lightning. “I mean, he’s a pro. He’s a competitive guy. He wouldn’t have come back to play at his age, to do the training you need to do.”

Entering his start in Thursday’s road game against the Anaheim Ducks, Anderson had compiled a 3-1-0 record with a 1.74 goals-against average and a .944 save percentage.

Among goalies who have played at least four games, Anderson’s goals-against average ranked second and his save percentage ranked fourth.

“He knows how hard this league is and his body has not been on the young side for the last few years,” Granato said. “So he knows what he has to do to compete at this level and he showed that from Day One.”

Remember, less than a year ago, Anderson was still looking for a team. He eventually landed a tryout from the Washington Capitals and parlayed that into a one-year contract.

Still, he spent much of the season on the taxi squad as their third goalie. His fourth appearance was in the Capitals’ regular-season finale. He made only three total starts, so he surpassed that number Monday.

Anderson hasn’t enjoyed this type of consistent work since 2019-20, when he played 34 times for the Ottawa Senators. If he keeps playing well, he could crack the 50-game mark for the first time in three seasons.

With the Olympic break in February, the Sabres have a jam-packed schedule.

“It’s a matter of just staying ready when called upon,” Anderson said Monday when asked about his early-season groove. “I think right now, the schedule is going to get pretty hectic. … The back-to-backs start picking up here with the big break there in February. So you have to be ready when called upon, get your rest, manage your reps in practice, whether it’s an extra day or whatever you might need.

“It’s a mental battle and being mentally fresh when you’re battling in games.”

Center Cody Eakin, out since suffering an upper-body injury during a practice drill Oct. 20, rejoined the Sabres for Thursday’s morning skate.

“I was happily surprised with Cody today,” Granato said. “He looked way better. I didn’t go with much expectation. I thought he would stay out of anything close to contact situation. He wouldn’t, he just jumped right in. So he is definitely feeling better. But no timetable yet (for a return).”

The Sabres’ next game is Sunday afternoon against the Los Angeles Kings.

Eakin’s return could push his replacement, winger John Hayden, out of the lineup. Hayden sat out the first three games as a healthy scratch.

In Monday’s win at KeyBank Center, the 6-foot-3, 223-pound Hayden was a physical presence all night, recording five hits.

“He did have a great game the other night,” Granato said. “He … used his size, strength, and it impacted things. I think (it was a) natural progression. He missed a couple games, a little more challenging to get in a rhythm. … But he’s pushed hard, he practices hard. …

“It just was nice to see him. And he impacts the game different than lots of other guys on our roster.”

After the Sabres landed in California on Wednesday, they took advantage of their first “normal” road trip in nearly two years by going out to eat. COVID-19 protocols last season basically confined NHL teams to their hotel rooms.

“It’s just the simple things, I guess, the camaraderie; not being able to do those things, you felt like you were only in a professional environment all the time,” Granato said on a Zoom call Thursday afternoon from Honda Center. “You just feel differently. When it opens up again, you feel differently that way and it’s more relaxed.”

The 28-year-old is in his fourth season in the New Jersey Devils organization.