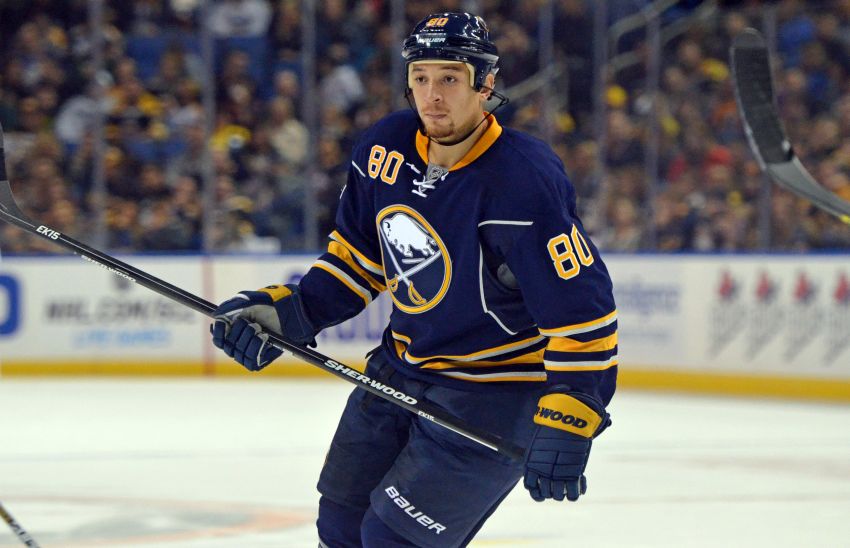 TORONTO – Incredibly, Tuesday’s 4-0 loss to the Maple Leafs, Chris Stewart’s 392nd NHL game, was his first appearance in his hometown.

Toronto was the only city the 26-year-old Buffalo Sabres winger hadn’t played in.

“My first year I got healthy scratched here, and then the lockout year we didn’t play the East, and then the one time I got traded to St. Louis and they already played here earlier in the year,” Stewart said Tuesday afternoon inside the Air Canada Centre.

“When my brother (Anthony) was playing in Florida, he was still in his Habs gear going to the game,” Stewart said.

Drew Stafford, of course, is hardly alone. The four Sabres wingers with multiple 20-goal seasons on their resumes – Stafford, Stewart, Brian Gionta and Matt Moulson – all have zero 10 games into the season.

“I got to get on the board,” Stafford said. “We have a few guys in here that are searching for that first goal. Unfortunately, it’s been missing from our game. … I’m counted on to provide. I need to be a lot better at that.”

His ice time has been dipping recently.

“He needs to find the net, and he needs to go to those areas,” Nolan said. “Shooting from the perimeters is not going to be good enough. … You got to go to the net and get to those dirty areas and battle away.”

Stafford, who has four has a team-high four assists, added: “I think I need to continue to get inside a little bit more, try to hang around the net.”

Nolan said he has “no worry” his top forwards will start scoring.

“Goal scorers always find a way,” he said. “There’s a few guys in the league that are notorious slow starters. Eventually, those goals scorers find a way.”

The Sabres have only 10 goals this season. Their power play is still scoreless.

“I am a little surprised we have struggled as much as we have,” Stafford said. “I definitely expected to be a lot better.”

One outburst, Stafford said, will help Buffalo’s offense get “some of that mojo back.”

“You get one of those game you get three or four goals, you get a power-play goal going, the floodgates can definitely open after that,” he said.

Sabres winger Marcus Foligno was watching his brother, Nick, a Columbus forward, on TV Sunday when his head hit linesman Shane Heyer in a scary accident along the boards.

Nick Foligno, who’s OK, fell and briefly couldn’t move or feel the right side of his body. He was stretchered off the ice in Los Angeles.

“It was pretty scary to see it at first,” Marcus Foligno said.

He said Columbus’ trainer relayed word to Buffalo’s trainer his brother was fine.

Notes: The fans didn’t boo Sabres defenseman Josh Gorges on Tuesday, his first visit this season. Gorges turned down a trade to the Leafs four months ago. “Maybe fans forgot – I doubt it,” Gorges joked to a throng of cameras and reporters prior to the game. … Nolan said the Sabres haven’t discussed rookie center Sam Reinhart’s future yet. The 18-year-old has played eight games. He can play one more before his contract kicks in. Nolan said he’ll sit down with general manager Tim Murray soon. … The Sabres used the same lineup as Saturday’s 2-1 win in San Jose, scratching forward Brian Flynn and defensemen Tyson Strachan and Nikita Zadorov. Strachan and Zadorov have been scratched nine of the 10 games.