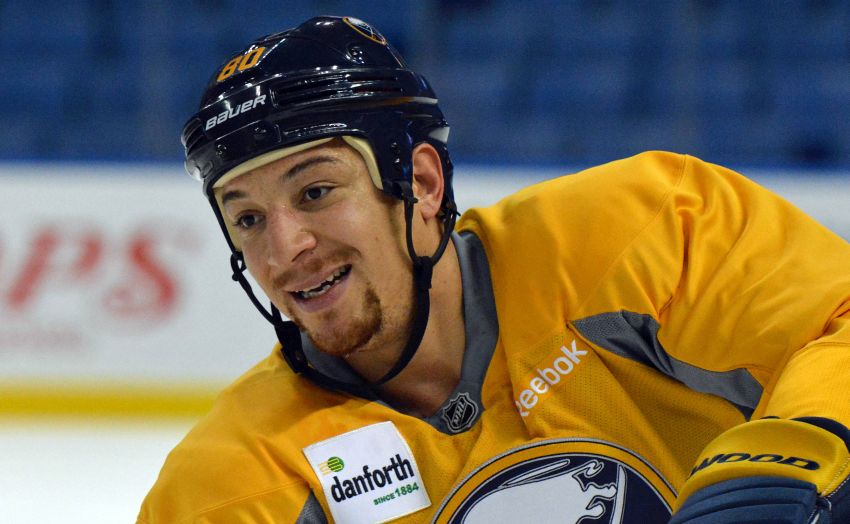 BUFFALO – Instead of walking into the dressing room following a long skate Tuesday morning, struggling Sabres winger Chris Stewart veered off and undressed somewhere else.

A few minutes later, a staff member wheeled in Stewart’s equipment on a shopping cart and placed it in his locker.

Clearly, Stewart, a healthy scratch for the Sabres’ 1-0 win against the Los Angeles Kings, wasn’t in the mood to discuss his benching.

“All players have to play to the best of their ability,” Sabres coach Ted Nolan said inside the First Niagara Center. “If not, there’s somebody else that will take their place.”

Less than two weeks ago, Stewart appeared to turn a corner. The 6-foot-2, 231-pound power forward scored two nifty breakaway goals during a three-game stretch, just his second and third goals this season.

But Stewart has done little since then, so Nolan scratched him for the first time this season.

Stewart, a key piece in the Ryan Miller trade with St. Louis, has four points and a minus-11 rating in 27 games this season. Rumors are swirling the Sabres will trade Stewart, an unrestricted free agent following the season. Nolan benched him for part of Thursday’s 5-0 loss in Tampa Bay.

Nolan said he hadn’t spoken to Stewart about the scratch.

Naturally, Russia recently put Sabres defenseman Nikita Zadorov on its preliminary roster for the upcoming world junior championship. The country has nothing to lose by adding the 19-year-old’s name.

“I just read it for the first time myself that he was on the list,” Nolan said Tuesday morning. “You can’t blame Russia for putting him on the list. But it one of those things we never even discussed.”

The chances of Zadorov leaving the Sabres for a few weeks are slim. They began Tuesday 7-8-1 with him and 2-8-1 when he’s scratched.

Three weeks in, Sabres center Zemgus Girgensons remains the leading vote-getter for the 2015 NHL All-Star Game, the league announced Tuesday. But get this: Girgensons added more than 400,000 votes in the last week. The 20-year-old has a whopping 803,805 votes.

Nolan faced his son, Jordan, a Kings winger, for the first time ever Oct. 23 in Los Angeles.

“Part of me was going, ‘Skate by him, Jordan’ or, ‘Shoot,’” Ted Nolan said. “But then, all of a sudden, you realize he’s on the other team. So it’s one of those things where you have mixed emotions, for sure.”

“We thought he’d be a little bit better,” Nolan said.