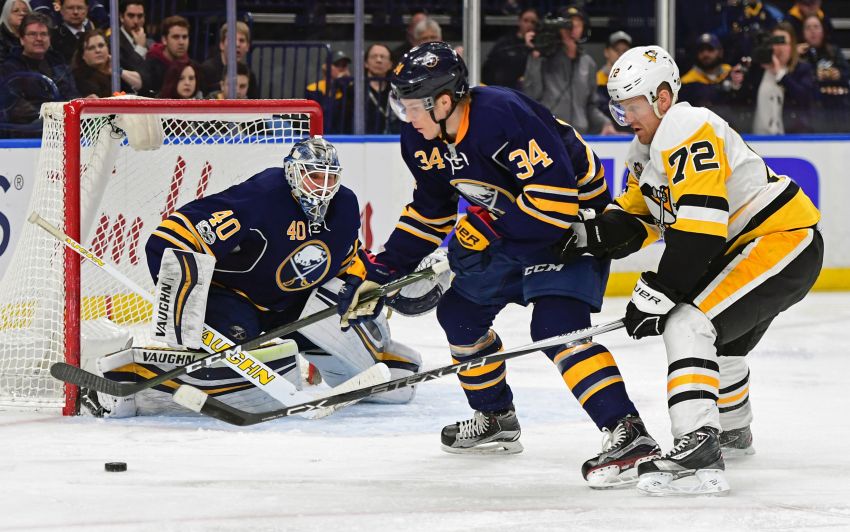 BUFFALO – After suffering a lower-body injury, Sabres defenseman Taylor Fedun stayed on the bench for the rest of Tuesday’s 5-4 overtime loss in Pittsburgh.

“He was trying to work through it,” Sabres coach Phil Housley said Thursday. “He wanted to be a part of the team. It’s good to see him try to gut it out for a little bit.”

Fedun’s injury is so bad it will sideline him six to eight weeks, Housley said. To replace him, the Sabres recalled defenseman Casey Nelson from the Rochester Americans.

The Sabres created roster space for Nelson and center Kyle Criscuolo, who was also summoned, by placing Fedun and defenseman Matt Tennyson on injured reserve.

Nelson, a college free agent the Sabres signed in 2016, has one goal and four points in 14 AHL games this season. The Wisconsin native played 18 NHL contests over the last two seasons, compiling four assists.

If Nelson plays in tonight’s road tilt against the Detroit Red Wings, he will become the 11th defenseman to appear in a game for the Sabres just 19 games into the season.

“It’s great that we brought a lot of new, fresh faces in which helps, especially since our defense has been hit with the injury bug here,” Housley said of the Sabres’ AHL depth. “So it’s great to have options because of the injuries we’ve had and the depth that has been taken away from us.”

The Amerks are 8-4-1-1, off to their best start in years. To Nelson, that’s no coincidence.

In addition to having a new coach, Chris Taylor, and general manager, Randy Sexton, they have about 15 new players.

“It’s a world of a change,” Nelson said. “Everything, from everybody’s attitude, it’s been a great change. I think we’re heading in the right direction.”

Scandella’s major whack to Penguins winger Patric Hornqvist leg about halfway through Tuesday’s game – it looked like he was chopping down a tree – earned him a $5,000 fine, the largest allowable under the collective bargaining agreement.

“It is an emotional game. That’s hockey. Obviously, I’m not out there trying to hurt anybody. It just didn’t look good and it’s out my character. I don’t want to do that.”

Housley said Scandella was frustrated because of a pick that wasn’t penalized.

“But that doesn’t give him the right to take matters in his own hands. He’s got to be smarter because he’s such a competitor and he loves to compete, that sort of caught him off guard.

The Sabres sent winger Nick Baptiste back to the Amerks on Thursday. Baptiste, 22, had zero goals in four games.

Speaking Wednesday in Rochester, Taylor said he hopes forward Alexander Nylander, out since suffering a lower-body injury in rookie camp more than two months ago, can play this weekend.

Nylander, 19, skated in the pregame warm-up Wednesday. The Sabres selected the Swede eighth overall in 2016.

Meanwhile, Taylor said Amerks winger Justin Bailey, out since suffering a lower-body injury Oct. 27 with the Sabres, “felt that he wasn’t ready to go.” The Sabres sent the Williamsville native to Rochester earlier this week.

Forward Evan Rodrigues, out since hurting his hand during the NHL preseason, is also back with the Amerks. Taylor didn’t offer a timeline for his return.