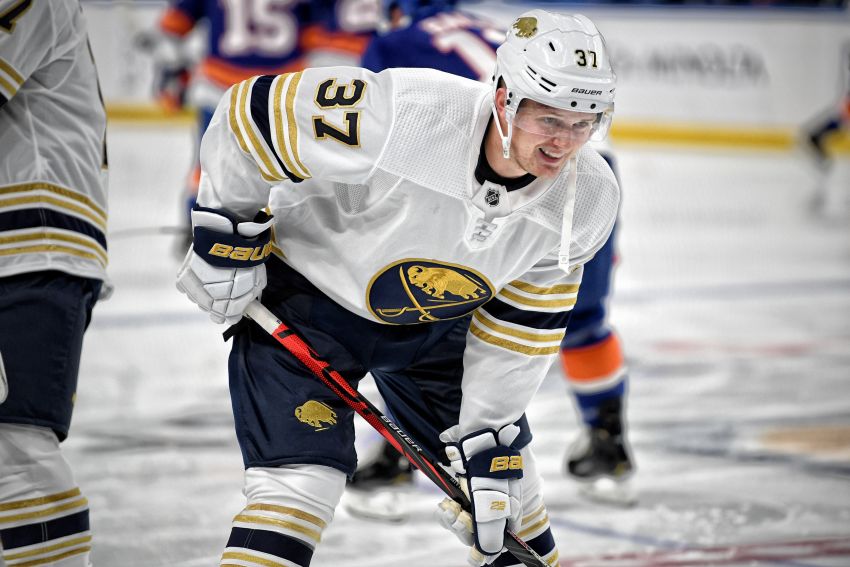 BUFFALO – Like most elite prospects, Casey Mittelstadt was a dynamic scorer in junior and college. So struggling for weeks sometimes in the NHL has been a new experience for the Sabres winger.

“It’s not easy, I’m not going to lie,” Mittelstadt said after scoring in Friday afternoon’s 6-4 win over the Toronto Maple Leafs inside KeyBank Center, his first goal in 17 games. “But at the same time, I’ve scored pretty much my whole life. I haven’t had too big a problem with it.

“When it comes, it usually comes in bunches.”

Mittelstadt, 21, hadn’t produced anything for weeks. His goal 12:08 into the second period, which put the Sabres up 3-2, was his first point in 16 contests.

Mittelstadt, of course, possesses dynamic talent. But he scored his first goal since Oct. 19 by tipping defenseman Marco Scandella’s point shot by Toronto goalie Michael Hutchinson in front of the net.

“Scandy told me before the game, actually, we were going to connect for one,” Mittelstadt said of his fourth goal this season. “He threw that at the net, so it was pretty funny.”

To help Mittelstadt and ease some pressure, Sabres coach Ralph Krueger recently switched the youngster from center to left wing. On Friday, he played beside center Marcus Johansson and Jimmy Vesey.

“It makes me remember how hard center is,” Mittelstadt said of playing wing. “No, it’s good. Honestly, I don’t see it too much there being much (difference), especially with (Johansson), who’s played a lot of wing. Kind of interchangeable there.”

Krueger has expressed confidence in Mittelstadt all season, saying he has sacrificed some offense by embracing the defensive side of the game.

“There hasn’t been negative pressure put on him and he hasn’t shown any type of frustration,” he said. “He’s just … stuck with it. We told you in training camp, he was beginning to learn the game away from the puck at a level that I don’t think he was ever engaged with and he is so engaged with that right now. He works really hard to be a responsible two-way player. …

“Now that he’s got more comfort defensively, we expect that offensive side. He’s 21 years old, still a project like a lot of our young players who’s going to be exciting to watch grow.”

When Toronto fired coach Mike Babcock on Nov. 28, Krueger missed an opportunity to face his good friend this weekend.

“We would’ve loved this back-to-back here,” Krueger said. “We were texting about it quite a bit through the summer, and now it’s not to be. I think as coaches we’re conditioned to try to do the best we can with the day that we have today and we also accept surprises.”

Krueger served as a consultant for Team Canada’s 2014 Olympic entry for the Sochi Games, which Babcock led to a gold medal.

After a 25-save outing Friday in his fifth start in the last six games, goalie Linus Ullmark will likely take a back backseat to Carter Hutton tonight in Toronto.

Both goalies have started 13 times this season.

While Ullmark, 26, has wrestled away most of the action, Krueger said the Sabres’ busy schedule will force them to utilize both netminders.

“With all these back-to-backs, we always need two goalies, as we will this weekend, and it’s just the order that’s really deciding it,” he said. “And, yes, Linus has had a little bit more responsibility, but we’re pretty well split on the season. And I think … there will eventually be more of split because of the schedule we have and the energy you need to play in goal at this level.”

Notes: For the fourth time in six games, the Sabres dressed seven defensemen and 11 forwards. After sitting out six of the last eight contests as a healthy scratch, defenseman Colin Miller moved in. … The Sabres scratched center Jean-Sebastien Dea and winger Curtis Lazar (both healthy). … Vesey has compiled three goals and five points during his career-long four-game point streak.