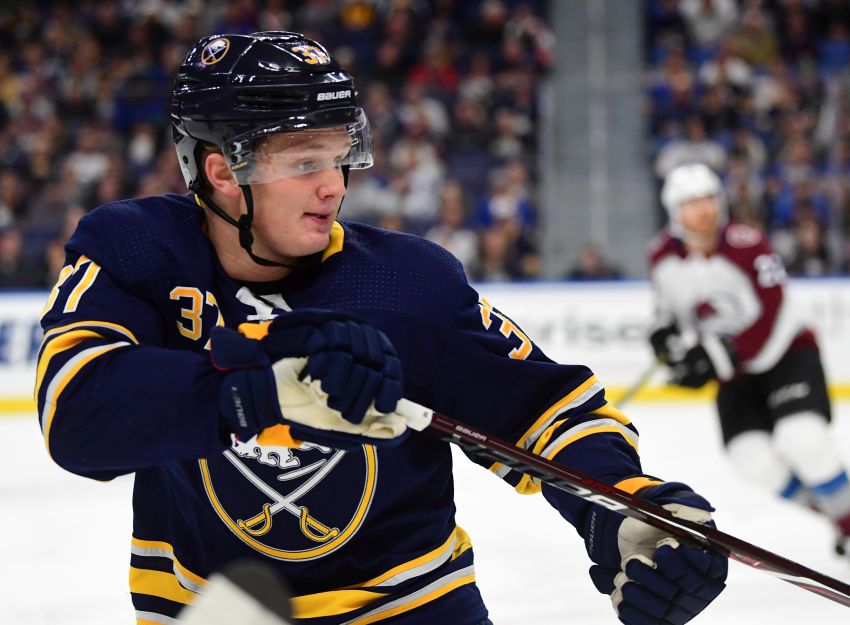 BUFFALO – Sabres center Casey Mittelstadt has produced goals and points at every level of hockey. So right now, 10 games into his NHL career, the rookie said he isn’t worried about his offense.

“I’m sure the offense will come, it usually does,” Mittelstadt said prior to Thursday’s 6-1 loss to the Colorado Avalanche inside KeyBank Center. “I’m pretty good with that.”

That’s why Mittelstadt said he has focused on developing defensively and improving in the faceoff dot, where he had won just 42.1 percent of his draws (eight wins and 11 losses) through three games.

Much of Mittelstadt’s life has changed since he turned pro in March. Instead of traveling to hockey camps throughout the summer, he stayed at home in Minnesota and concentrated on his training.

In his brief time with the Sabres, Mittelstadt has never even practiced beside Johan Larsson, who returned from a lower-body injury Thursday.

While the Sabres used the same lineup in two straight wins, Housley gave Larsson, 26, a look. The Swede, who usually plays center, skated at left wing beside Mittelstadt and Tage Thompson against the Avalanche.

Housley wanted Larsson, who replaced newcomer Remi Elie, to lend some experience to a line that features two neophytes.

“He’s been out for over two weeks now and he’s worked his way back in,” Housley said of Larsson. “We want to get him back in the lineup, get him a game. He can help out on the faceoffs, help out on the penalty kill. And he’s playing with Casey and Thompson … which I think will bring some stability to that line.”

Larsson, one of the longest-tenured Sabres, hurt himself blocking a shot in a Sept. 26 preseason game. He’s fine with playing on the wing.

Winger Jason Pominville, 35, played his 664th regular-season game with the Sabres, tying him with Mike Foligno and Ric Seiling for the 10th-most games in team history.

“I’m sure once I’m done playing it’s something I’ll have time to reflect on a little bit more and appreciate more,” Pominville said. “But it’s definitely humbling, having an opportunity to play that many games and stick around for that long. It’s pretty special playing the majority of my games with this team, too.”

Pominville is 17 games behind Rick Martin for ninth on the list.