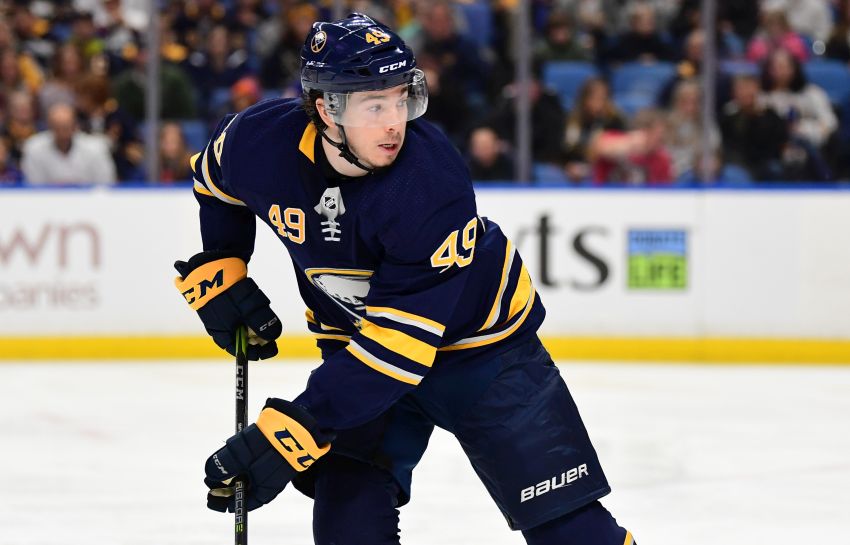 Then Smith, 24, quietly began the next season in the AHL, where he morphed into a top scorer and an intriguing prospect with the Rochester Americans.

Still, the Sabres kept Smith in the AHL nearly a year and a half before finally summoning him prior to Monday’s 3-1 loss to the New York Islanders.

Even as the Sabres struggled mightily last year, Smith, an AHL All-Star, stayed down and continued developing. This season, despite a strong training camp, the Sabres chose winger Tage Thompson over him.

So his first NHL appearance since April 3, 2017 was extra special for Smith, who has utilized his shot more often this season while scoring 13 goals and a team-high 29 points in 33 games with the Amerks.

“Honestly, I think I’m even more excited to get in tonight than I was maybe my first NHL game, because everything happened so quick, I really didn’t take for granted the whole situation,” a smiling Smith said inside KeyBank Center. “I worked really hard to get back to this point. Obviously, the coaching staff down there has helped my game out a lot. I think I’ve been pretty consistent and a pretty good overall player.”

But the Sabres, who rank third in the Atlantic Division, have struggled since their 10-game winning streak last month, losing 10 of their last 14 contests (4-6-4) entering Monday. Their offense, most notably the secondary scoring, has also dried up.

Only Sabres captain Jack Eichel, who left the game in the first period with an upper-body injury, played less than Smith, who also killed penalties.

“I really liked the way he attacked the game using his speed, he created some opportunities offensively,” Housley said. “He was around the puck all night.”

Smith tried to embrace his demotion – “Going down and pouting is not going to help your situation,” he said – and utilize his additional time in Rochester.

“They didn’t think my game was NHL-ready, so (I) had to keep working and keep finding out ways and keep playing better and better and getting more consistent to get the opportunity,” Smith said.

Clearly, that consistency – Smith hasn’t gone more than two games without a point all season – impressed the Sabres.

“It’s a long season,” Smith said. “I think I learned a lot of things that help to just be ready every night to play. I think last year I would have a couple good games and maybe even a game off, where I think this year, even when you are a little tired, I’ve been finding ways to help out the team even when you don’t have it all.”

While the Amerks fell into second place in the North Division over the weekend, they’ve still enjoyed a terrific season.

“When you’re first in the division, teams are going to give you your best game every night,” Smith said. “So that’s one thing that honestly helps us, come the end of the season we have to show up every night and we can’t take a night off.”

Islanders coach Barry Trotz on Sabres rookie defenseman Rasmus Dahlin: “I look at him and I see (Hall of Famer) Nick Lidstrom. Very efficient, probably doesn’t realize how good he is yet. He’s going to be a dominant player for years to come. He’s just scratching the surface of what he’s going to be.”