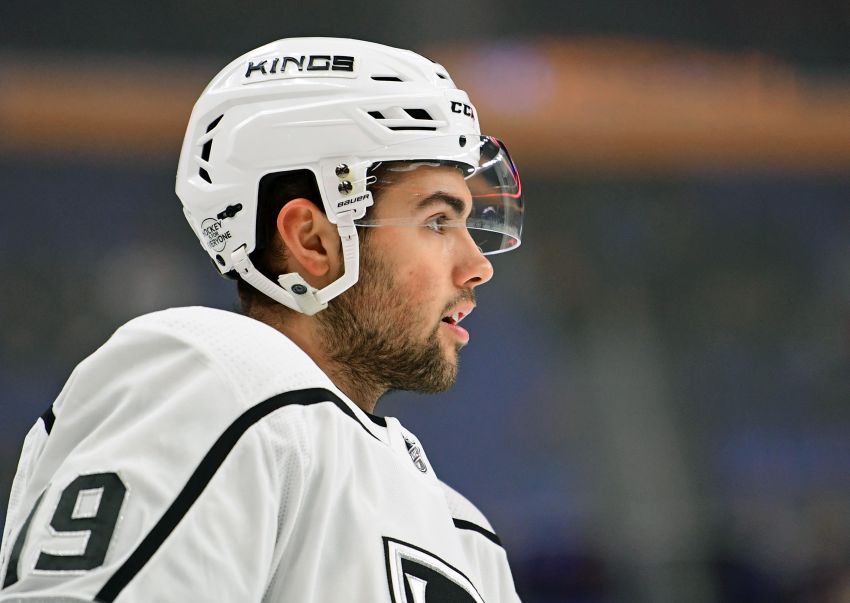 BUFFALO – The bus carrying family and friends from The Towne House, the tavern Alex Iafallo’s parents, Barb and Tom, own and operate in Hamburg, to KeyBank Center on Saturday was missing two notable passengers.

Instead of watching Alex face the Sabres in his first NHL game in Buffalo, the Iafallos were in Columbus, Ohio, because their daughter, Julianna, a forward on the Ohio State women’s hockey team, was being honored at senior night.

“They had to make a decision, a tough one, but I’ll have a lot of family here,” Alex Iafallo said Friday.

Iafallo, a rookie forward with the Los Angeles Kings, knows his parents made the right choice missing Saturday afternoon’s 4-2 win against the Sabres.

“I’d rather have them be with my sister, it’s her senior weekend,” said Iafallo, who assisted on Anze Kopitar’s second goal.

Iafallo’s cheering section was large and, having just come from The Town House, well fed.

“That’s the Buffalo way of doing it,” Iafallo said. “Get some wings in you before the game, you know?”

During warm-ups Saturday, fans displayed signs, including one pressed against the glass that said “Eden Loves Iafallo” with a heart drawn on it. Iafallo’s fans cheered when his name was announced in the starting lineup at left wing beside Kopitar and Dustin Brown on the No. 1 line.

Saturday’s tilt was Iafallo’s 56th NHL appearance. Quietly, the undrafted youngster has been one of the league’s better rookies this season.

After playing four seasons at the University of Minnesota-Duluth – Iafallo compiled 21 goals and 51 points in 42 games as a senior a year ago – the Kings signed him as a free agent in April.

He credits his offseason work for helping him crack the NHL without playing a game in the minors.

“I feel like it started in the summer, in the offseason was huge,” said Iafallo, who has compiled six goals and 20 points. “I worked with our development staff, they were awesome this summer. Just the simple things off the ice go a long way. I just came into training camp with a hardworking mindset, whatever happens, just got to stay positive. It ended up happening I could stick here.”

Iafallo, of course, grew up rooting for the Sabres. He said he played at KeyBank Center as a child and later in the Bowman Cup, a game between Buffalo and Rochester teenagers, when he was attending Eden High School.

“It’s a pretty cool feeling being out there on the ice, especially at the NHL level,” Iafallo said.

“I really liked Nick’s game,” Sabres coach Phil Housley said. “I thought Nick took a little bit of a step back against Ottawa (on Thursday). I didn’t see the tenaciousness that he had in his last game, using his speed, his wall play. I think he could’ve been a little bit hungrier in the battle. I can see him getting back in the lineup.”

Meanwhile, defenseman Justin Falk replaced Josh Gorges. The two veterans have been moving in and out over the past few weeks.