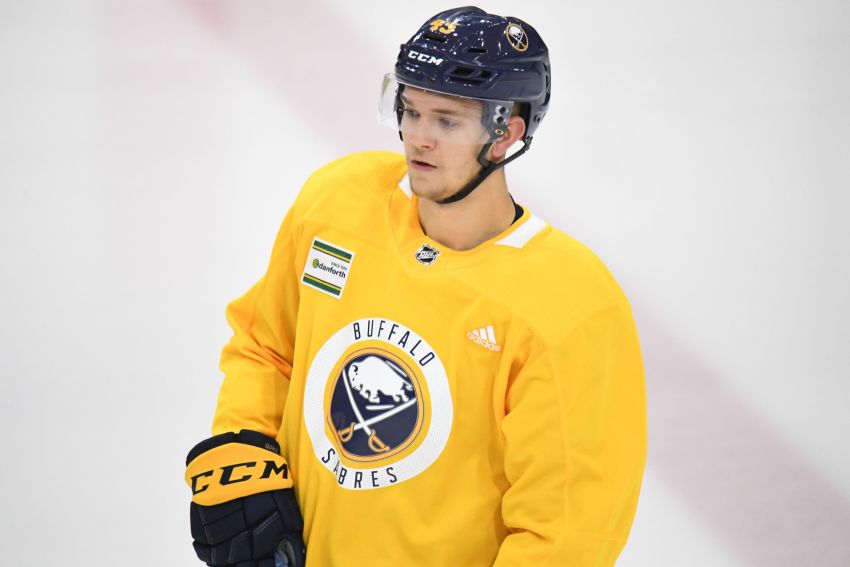 BUFFALO – During the second intermission Saturday in Cleveland, defenseman Brendan Guhle was informed the Sabres needed his services the next day more than 600 miles away in Boston.

So instead of finishing the Rochester Americans’ 2-1 victory against the Monsters, Guhle, who scored earlier in the game, spent all of the third period and overtime watching from the bench.

“It was pretty weird,” Guhle said prior to Tuesday’s 5-2 loss to the Florida Panthers inside KeyBank Center. “I was just kind of sitting there and everyone was kind of wondering like what was going on.”

He added: “It was a close game and I wanted to be out there.”

Guhle, 21, spent the night in Cleveland before flying out Sunday morning for his third game in three days, an afternoon tilt. In his first NHL outing since April 7, he skated 11 minutes, 59 seconds in the Sabres’ 4-2 win against the Bruins.

Guhle, a second-year pro, was the organization’s highest-touted young defenseman before Rasmus Dahlin arrived. At times this season, he has struggled a bit in the AHL.

In recent weeks, however, he has started showcasing his slick form with the Amerks.

He said that means “not being on my heels and pushing the pace.”

“Those are two of my attributes that I can bring to the game,” Guhle said. “I feel like I’ve been doing that lately.”

Guhle spent most of Sunday’s game partnered with defenseman Matt Hunwick, who was also playing his first NHL game of 2018-19. A neck injury sidelined Hunwick, 33, before he began a two-game AHL conditioning stint last week.

“I’d like to see Brendan use his speed. At times, he did, but just adding to the rush or carrying the mail out of our zone.”

Hunwick said: “We did fine. We just have to up the communication in terms of talking, just to make sure you know where each other are at all times.”

Housley said Hunwick’s experience – this is his 12th NHL season – can help him join the team midseason without the benefit of a training camp.

“He’s catching a moving training, let’s face it,” Housley said. “The timing through training camp and all of a sudden getting thrown in, he’s well-prepared, he’s ready. But I thought he played some really solid minutes for us against Boston. It was a good start for him.”

After skating with his teammates for the first time Tuesday morning since suffering an upper-body injury Nov. 29, Sabres defenseman Jake McCabe figures he can return by the weekend.

McCabe, who missed his ninth game, has skated eight of the last nine days, only taking Monday off.

While McCabe only has one team session under his belt – a light morning skate – he has spent the last week going through rigorous on-ice workouts from Dennis Miller, who rehabilitates the Sabres’ injured players.

When injured players return, they often sing Miller’s praises. His methods ready them for game action.

“I’m coming back, I’m ready to go,” McCabe said. “It’s not one of those things where you try to ease yourself back into it. We’re working our (butt) off out there and we’re battling so when I come back it’s a seamless transition.”

McCabe said Miller is “one of a kind.”

“I don’t think (there’s) anybody in the league like him, so we’re lucky to have him here,” McCabe said. “He doesn’t a really great job of preparing us to get back with the team.”

The Sabres have been receiving huge contributions from the top line of center Jack Eichel, Jeff Skinner and Sam Reinhart.

But the secondary scoring has been, well, light. So Housley flipped the centers on his second and third lines Tuesday, putting Casey Mittelstadt between Evan Rodrigues and Jason Pominville and Vladimir Sobotka with Conor Sheary and Kyle Okposo.

“Just trying to look for some chemistry and balance,” Housley said. “Obviously, Jack’s line has been terrific for us contributing offensively. We’re just trying to give a different look, a fresh look, and see where it plays out. I think they’re very well balanced.”

Housley said defenseman Lawrence Pilut (lower body) could return this weekend, when the Sabres play their final games before a Christmas break.

Meanwhile, Housley said winger Scott Wilson (broken ankle) has been skating a week and is close to joining team sessions.