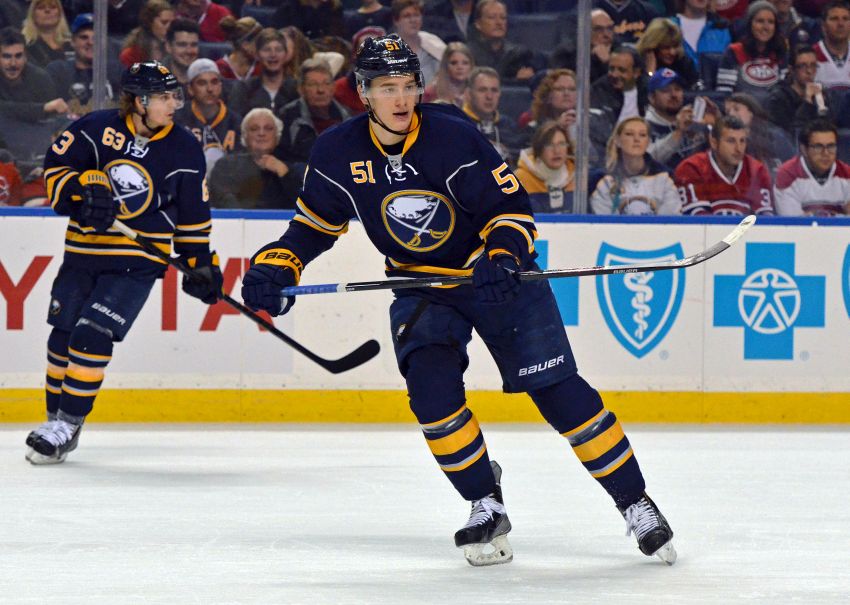 BUFFALO – So, Sabres defenseman Nikita Zadorov, how did it feel to hear coach Ted Nolan say you have earned a roster spot?

“Did he say that?” Zadorov said this morning inside the First Niagara Center. “I didn’t know that.”

Assuming the game is played, the 19-year-old will make his ninth appearance tonight. His contract kicks in with a 10th.

Zadorov has impressed since Nolan dressed him Nov. 2, playing big minutes some nights.

“I got in the lineup and I show my best game,” he said. “Now it’s like nothing behind me and just to go forward and play my best game, because I have nothing to lose.”

Right now, the game is still on. A massive snowstorm is battering the area south of Buffalo. The Sabres held an optional skate with nine players this morning.

The Sabres probably hope this one gets played. They’ve beaten the Sharks seven straight times.

Check back later for a full story on Scott, who played two seasons with the Sabres.

“I wish I was playing tonight,” Scott said. “I could get into a fight, show them what they’re missing.”

Another update: Nolan said only one player, winger Patrick Kaleta, won’t make it to the rink tonight. Kaleta, who was going to be scratched before the storm, lives in the Southtowns.

“We have to ensure safety first,” Nolan said.

Nolan also said some medical staff can’t make it. Assistants will take over.

Nolan’s interested to see what kind of crowd shows up.

Update: Tonight’s game will be played as scheduled, the Sabres announced this afternoon. Fans can exchange unused tickets to tonight’s game for tickets to a future game listed below: