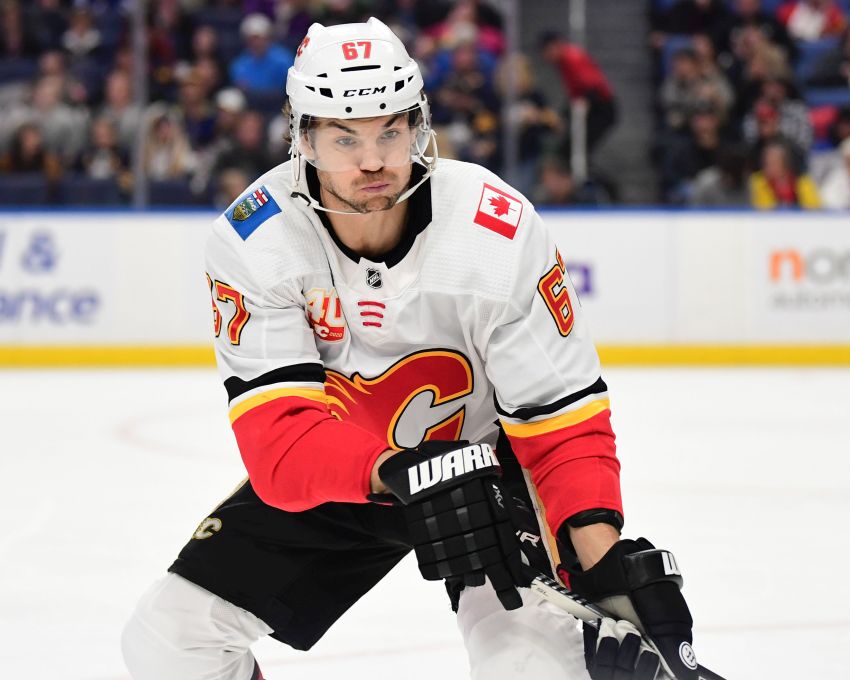 BUFFALO – Michael Frolik’s whirlwind Tuesday started around 6:30 a.m. in Toronto. After waking up, the Sabres newcomer headed to the U.S. Embassy.

After a trip back to the hotel, Frolik returned around 3 or 4 p.m. and picked up his visa – he said it was approved in just one day – and left for Buffalo. But traffic added nearly an hour to the drive, so the Czech arrived around 7:30 p.m.

Five days after the Sabres acquired Frolik from the Calgary Flames for a fourth-round draft pick, he had finally made it to Buffalo. Still, his day wasn’t over.

As Frolik waited in Calgary for the visa process to start, he only skated twice at a local rink. So he wanted to get back on the ice in Buffalo right away.

At 8:30 p.m., Frolik enjoyed a solo skate at KeyBank Center.

“It was a little skate, I need to feel the legs a little bit,” Frolik said following Wednesday’s practice.

While the affable Frolik, 31, has only skated once with his new teammates, Sabres coach Ralph Krueger said he will “definitely” play in tonight’s road game against the St. Louis Blues.

“He was flying out there and you can see he went for a little skate (Tuesday) night here with nobody around so he could warm up the blades,” Krueger said. “But he’s definitely hungry and extremely engaging. He’s everything that the information on him was as far as his off-ice presence. His confidence and his personality fits into our group really well right off the hop.

“But we definitely sense a passion for this challenge and a hunger to want to be here.”

“Whenever you add something or change something, it adds a little bit of a spark,” Johansson said. “You could see it out there, it looked like he was having fun. That kind of spreads around the team as well.”

“This definitely brings energy at a good time,” Krueger said of Frolik’s arrival. “We’re having to dig deep into our resources to maintain the pace that we’re expecting from each other right now. His leadership dealing with these kind of stretches will help us also.

Frolik has endured a tough season. After spending most of his career with the Flames skating on the second line, his minutes dropped. He was even a healthy scratch.

Frolik is the second-oldest player on the active roster behind goalie Carter Hutton, who’s 35. He has played more games (831) than anyone on the Sabres.

Krueger said he wants Frolik to “just play free and play naturally within the principles.”

“We have to be patient on him automating those principles and we’re not going to overload him here,” Krueger said. “He has such a good instinct and you could see his speed already today. His defensive decision making is strong and we feel he’s going to slide into the way we want to play quickly.”

Krueger said the coaches would show Frolik some video clips on the flight to St. Louis and give him more information today “on a need-to-know basis.”

“If he’s lost, playing with Marcus is going to help a lot,” Krueger said. “He’s a good sidekick for him here early on to support him in the process. But let’s let Michael play, let’s bring his strengths into the game and be patient, of course, with the process.”

Frolik, who won the Stanley Cup with the Chicago Blackhawks in 2013, has evolved over his 12 NHL seasons. He scored 21 goals in each of his first two years.

“When I got to Chicago (in 2011), there was a lot of offense there, so I got to switch roles a little bit to have more (ice time) and learn the PK and shut down the other lines and play more defensive,” Frolik said.

Frolik has compiled five goals, 10 points and a minus-10 rating while averaging a career-low 11 minutes 56 seconds of ice time over 38 games this season. The Flames regularly utilized him as a penalty killer.

“I had a great few years there,” he said. “I’m looking for more here in Buffalo.”

The former fourth-round pick recently returned from the World Junior Championship in his native Czech Republic.

Behind The Bench w/@BillHoppeNHL and @WBFOmar: #Sabres get Frolik to help fill void left by injuries. https://t.co/9Lf2kWZ3dF