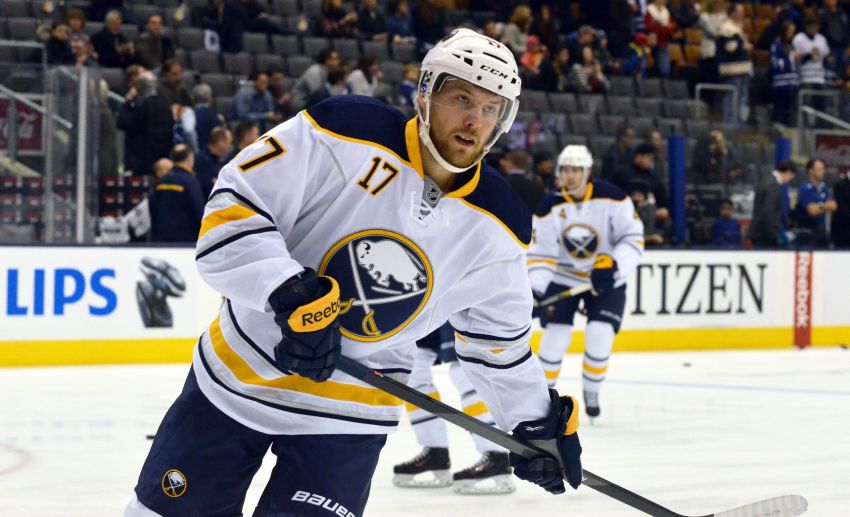 TORONTO – The highlights have millions of views on Youtube.com. In one clip, Linus Omark does a spin-o-rama before a shootout-winning goal. In another, the slick Buffalo Sabres winger slows down and flips the puck over the goalie, almost comically.

But Omark’s flashy skill set hasn’t translated into NHL success yet. The 26-year-old had only eight goals and 30 points in 67 games entering Friday’s 4-3 shootout loss to the Maple Leafs inside the Air Canada Centre.

“I think I’m a better player than a flashy player,” Omark said prior to his second appearance with Buffalo. “I’m a playmaker. I do fancy goals sometimes but it’s not just that.”

Omark, who likes his first name to be pronounced “leen-us,” might be down to his last NHL chance.

The hapless Edmonton Oilers dished the Swede to the Sabres last Thursday for a conditional sixth-round draft pick. Interim coach Ted Nolan said following Omark’s debut in Saturday’s 4-1 loss in Boston that he “has to be better.”

“Not too many times you get too many chances,” Nolan said Friday afternoon. “He’s a young guy, but he’s got to play with a lot more energy than he did. We’ll give him the benefit of the doubt the first time, jet lagged and getting to a new team and having the flu.”

That flu kept Omark from playing in Monday’s 2-1 overtime win against Phoenix. Thanks to the illness and the three-day Christmas break, Friday’s morning skate was the first time he practiced with his new teammates.

He skated 9:31 on the right wing Friday beside Ville Leino and Marcus Foligno.

Nolan wasn’t impressed with the players, all of whom missed last game.

“You still got to compete a little bit more,” he said.

Omark played just one game with Edmonton this season despite tearing up the AHL in Oklahoma City.

“When I signed here this year I wanted to play in the NHL,” he said. “I wanted to get that opportunity right away. I didn’t get it right away, so I’m glad they traded me and I get a chance to show what I can do.”

Omark went to Switzerland last season so he could receive more playing time.

“I think I played pretty good there and gained a lot of confidence playing a lot because the year before I was hurt for a little more than three months,” said Omark, who had 17 goals and 69 points in 48 games in the Swiss-A League. “I needed to play big minutes.”

Does Omark believe the Oilers, who drafted him 97th overall in 2007, gave him a fair chance?

Winger Drew Stafford said he felt badly about getting ejected Monday for elbowing Oliver Ekman-Larsson. The Sabres only had 16 skaters dressed due to illnesses.

“That was tough,” Stafford said. “I felt more bad just because of the short bench. It was tough enough as it is with the three lines and we were playing a certain kind of game.”

Stafford said the league hasn’t contacted him about the hit.

“I was getting ready for a counter hit,” he explained. “The guy kind of bailed on me. He didn’t really engage at all. He kind of gave me the long stick. My force kind of came back into him. The follow-through got him.”

He added: “It’s unfortunate the guy kind of yard-saled a little bit, sold it pretty well.”