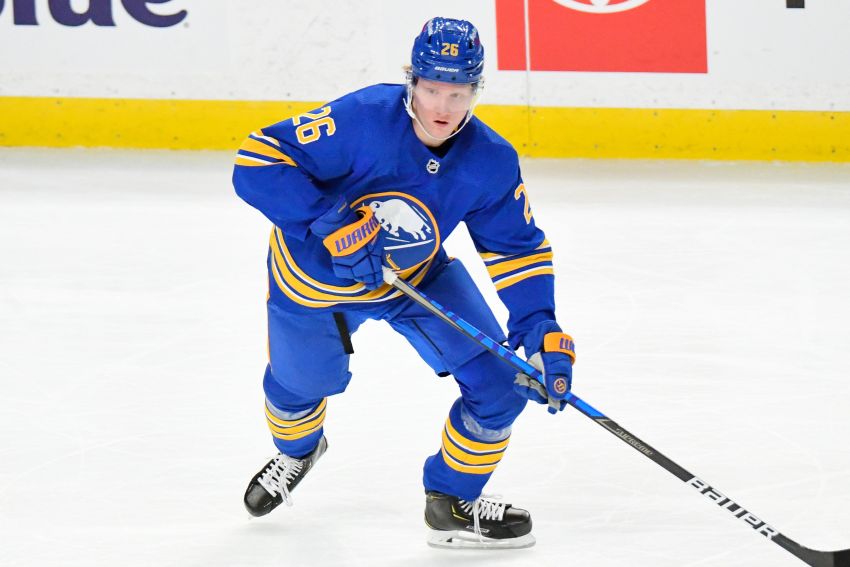 Dahlin, 20, looked lost around Buffalo’s net, allowing the Capitals to convert two easy chances he could’ve nullified. After Jakub Vrana scored 13:07 into the second period, a frustrated Dahlin smashed his stick into the ice.

His night was just about done. He only played one more shift during a power play early in the third period.

The Sabres, of course, have plenty of experience to help Dahlin, the first overall pick in 2018, on the ice. He has established a strong relationship with ex-NHL defenseman Steve Smith, the assistant coach in charge of the blue line. Matt Ellis, the director of player development, also travels with the Sabres.

“My responsibility is to come at the players straight and honest,” Krueger said on a Zoom call following Saturday’s practice in Washington, where the Sabres face the Capitals again this afternoon.

Not surprisingly, Krueger said he and Dahlin had “that talk” and “quite a few face-to-face moments” Saturday morning.

“Making it really clear what the expectations are, why we made the decisions we made yesterday, and that they’re only in one interest, and that’s to turn him into the best possible National Hockey League player, and him understanding that sometimes a little bit of a setback and some pain helps him to better understand what needs to be done,” Krueger said.

Krueger said following Friday’s game at Capital One Arena he did not want the benchings – winger Tage Thompson also sat out late – to be overblown. The Sabres, who have started slowly at 1-3-1, needed to chase a victory, and other players deserved ice time.

After Krueger benched Dahlin a full period early last season, he played him almost 20 minutes the next night.

When Krueger was asked about the benefits of Dahlin possibly sitting out and watching a game, he did not address scratching him. Instead, he spoke about the “psychological and mental processing” the Swede must go through to rebound from Friday’s poor outing.

It seems unlikely Dahlin, who played 10 minutes, 8 seconds Friday, will be a healthy scratch this afternoon.

“When you’re on the road especially and you end up with the top players on the other team – and Washington had more of a gritty lineup yesterday – he’s going to end up in those matchups, which at home possibly he doesn’t see as often, so the learners are much bigger here,” Krueger said. “There’s opportunity in that. I think it’s what happens in your mind.

“We don’t try to paralyze the players with structure, we just need certain principles to be executed defensively for us to eliminate the chances. For him to get used to doing that against top players, for me, it’s truly seeing that in his mind and not overloading him with video, quite honestly. He needs to see some video but for me, the teaching process is much more catching him doing things right, which he does a lot, and just making those his habits versus slipping into some older habits that he might have taken out the past few years.”

Dahlin has compiled zero points and a minus-4 rating in five games this season.

Other than their 6-4 opening night loss to the Capitals on Jan. 14, the Sabres have played well in every game, often showcasing strong defensive structure while consistently generating more scoring chances than their opponents.

Of course, that has translated into just one win. The Sabres, who have displayed an alarming lack of finish, rank last in the new East Division, five points behind the first-place Capitals.

They already have a lot of ground to make up in the standings.

“You need to understand the importance of getting points now,” Krueger said. “We’re in a position where a correction can come very quickly with some positive momentum. But there is a sense of urgency in the air, and what you try to do is make sure that that constant improvement remains the focus while at the same time, understanding what the difference-makers are to get the wins, what we need to add in those moments of decisiveness, which have to happen around scoring chances, which has to happen around power play.

“We love the defensive structure of the team. We’ve given up very few chances relative to what we did last year, and we believe that we’re playing two of the better teams in the league with Philadelphia and Washington, so that has been confirmed.”

“But unfortunately that’s not how it works in this league,” he said. “You’ve got to get the results. But I think we still have a good attitude and a positive attitude. We still just got to get to that next level of hunger around the net and get a couple second-opportunity goals kind of like they scored last night, get pucks to the net and rebounds coming out, banging those home.”

Krueger gave a thumbs up when he was asked if Sabres winger could Kyle Okposo make his season debut this afternoon. A lower-body injury has sidelined Okposo the first five games.