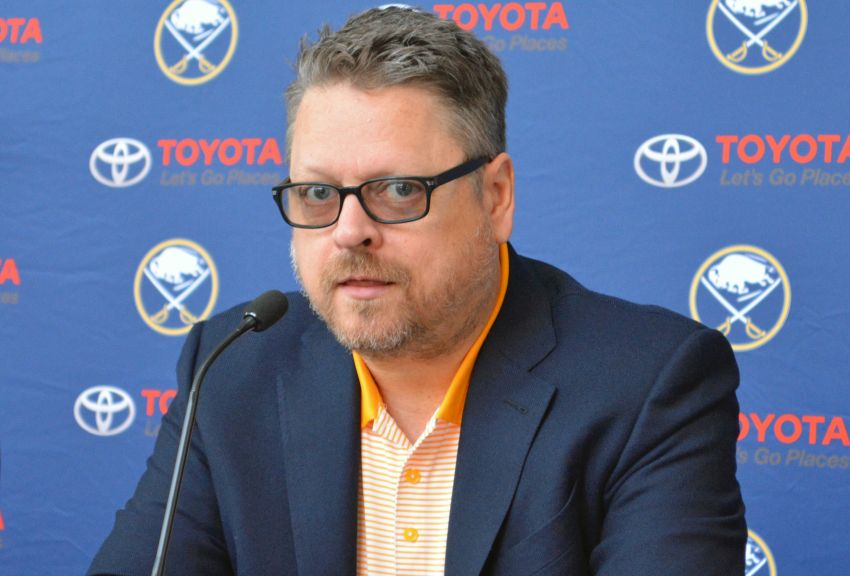 BUFFALO – Given the speed at which the offseason moves, the Sabres must find a new general manager soon, perhaps in the next month, to replace Tim Murray, who was fired with coach Dan Bylsma on Thursday.

Of course, given owner Terry Pegula’s track record, would the Sabres even hire a GM first?

Remember, Pegula hired Pat LaFontaine as the team’s president of hockey operations in November 2013. LaFontaine lasted less than four months in the role, although he hired Murray.

A czar to oversee the hockey department might give the Sabres some much-needed stability and help Pegula and his wife, Kim, who have a dubious track record of making hockey decisions.

Or, could the Sabres go for a coach first? While that’s highly unlikely, Pegula’s NFL team, the Buffalo Bills, set up a structure that gives coach Sean McDermott most of the power. Yes, McDermott was hired after GM Doug Whaley. But McDermott is clearly in charge and has become the team’s voice.

Still, the most likely scenario is finding a GM first and allowing him to hire a coach.

Which GM candidates could the Sabres examine?

They reportedly have a strong interest in former NHL defenseman Norm Maciver, who has won three Stanley Cups in 11 seasons with the Chicago Blackhawks. Maciver is currently their assistant GM behind Stan Bowman.

Bowman told the Chicago Tribune last year Maciver was a “stabilizing force” with the Blackhawks.

“He’s played a very big role in this and we wouldn’t be here without his help,” Bowman said.

Despite winning the Cup in 2012 and 2014, the Los Angeles Kings recently fired GM Dean Lombardi, who will almost certainly get another job in the near future.

If the Sabres want more experience, former Sabres coach and player Rick Dudley, the Montreal Canadiens’ senior vice president of hockey operations, has been a GM of four NHL teams. The Sabres showed some interest in Dudley before they hired Murray.

Another name bandied about Thursday was NBC color analyst Pierre McGuire, who, as viewers can attest to, knows the NHL inside and out. McGuire briefly coached the Hartford Whalers and has also been an assistant coach and a scout.

Who could become coach?

Unlike other sports, the NHL doesn’t have a slew of up-and-coming coaching candidates every year. Most coaches are recycled.

One assistant likely to get his first head coaching job in the near future is former Sabres defenseman Phil Housley, an NHL Hall of Famer. Housley has spent the last four seasons as an assistant in Nashville.

Another name generating NHL interest is David Quinn, Sabres center Jack Eichel’s college coach at Boston University. But given the optics – the Sabres might not want Eichel to look like a 20-year-old GM – they could shy away from Quinn.

If the Sabres hire Maciver, a logical connection can be made to Blackhawks assistant Kevin Dineen, who coached Buffalo’s former AHL affiliate, the Portland Pirates, for three seasons. Dineen used that gig to briefly earn his first head coaching job with the Florida Panthers.

Former Sabres coach Lindy Ruff, who was fired by the Sabres in 2013 and let go by the Dallas Stars earlier this month, could be in the mix. Only two players – wingers Tyler Ennis and Marcus Foligno – are left from his time here.

The league’s recent history of coaches returning for a second run with a club – Randy Carlyle with the Anaheim Ducks, Claude Julien with the Montreal Canadiens and Ken Hitchcock in Dallas – makes a Ruff reunion seem plausible.