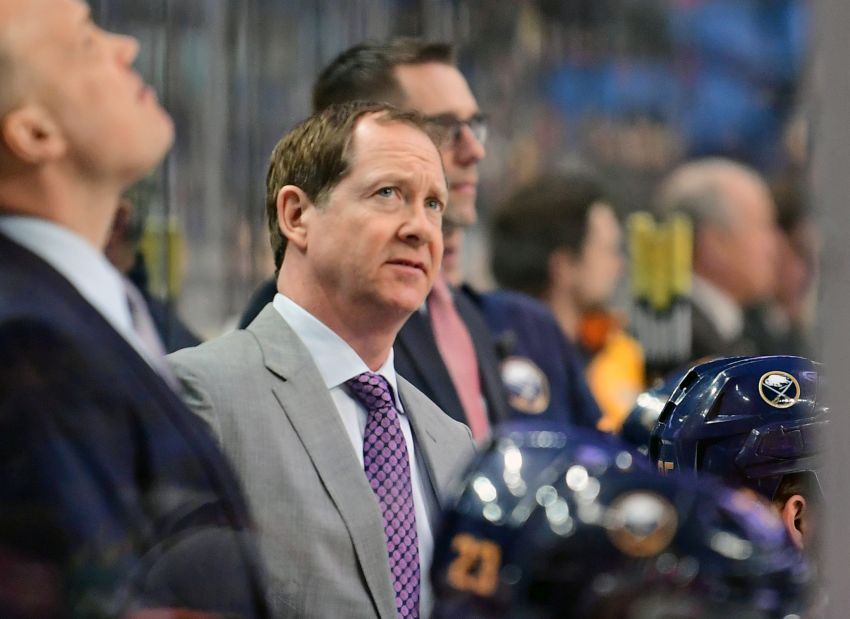 Just hours after an embarrassing 4-1 home loss, the Sabres looked sluggish early during Thursday’s practice. At one point, associate coach Davis Payne barked at the players to stop coasting.

Housley finally had enough after watching them execute the drill incorrectly, yelling, “Get on your toes and start (expletive) working!”

“We weren’t doing what I told them to do … so I just tried to get their attention,” Housley said after the Sabres prepared for tonight’s tilt against the Montreal Canadiens. “The execution after that point was good.”

“We’ve got to do our thing and go out there and work,” he said. “If they feel we’re not going hard enough, they’ve got to make sure they push those buttons. They did today.”

But should it have taken that much to get the NHL’s worst team to start working? The Sabres’ wretched effort left Housley seething after Wednesday’s loss to the Arizona Coyotes.

“I thought we didn’t have what it was going to take to win (Wednesday’s) game.”

As Housley said, when the Sabres give strong efforts, they’re usually rewarded.

“When we do play well, when we work hard, when we stick to the game plan, we’re a pretty good team,” Pominville said. “When we deviate, when we get away from that, we’re a very average team.”

But calling the Sabres a “very average team” when their battle level drops is being kind. While they’ve played much better over the last two months, some brutal losses have often overshadowed their small successes. About once a month or so, an opponent throttles them at home.

“We have good nights and then we have nights where we’re really bad,” Sabres center Jack Eichel said. “I think that the best teams in our league really don’t do that. We need to find a way to bring it every night.”

Housley said hopes his players are “angry” and “upset.”

“Sometimes you take three steps forward and you take one, two steps back,” he said. “We’re not continuing to make that consistent momentum that we have.”

On Monday, the Sabres played the powerhouse Nashville Predators tough, forcing the NHL’s best team to defend much of the night. While they lost 4-0, the game was closer than the score indicated.

Two days later against the 29th-ranked Coyotes, the Sabres suffered a letdown.

“I don’t understand, maybe it’s the way we prepare for teams that are elite teams in the league,” Pominville said. “We know we have to show up, if we don’t it’s not going to go our way. For some reason we take the foot off the gas against teams that are kind of where we are in the standings.”

Several of the Sabres’ upcoming opponents – Montreal, the New York Rangers, Detroit Red Wings and Ottawa Senators – are far out of the playoff chase.

Could the Sabres totally implode over the final nine games?

“We got to make sure we step on the gas and have a little pride,” Pominville said. “That’s what it is, have a little pride in the room to come out with an effort. The rest will figure itself out but as long as we bring the effort, we should be fine.”

Fans, of course, are disgusted with the Sabres. Attendance has dropped dramatically in recent weeks. Wednesday’s announced crowd of 17,029 looked closer to 10,000.

“They have a reason to be negative,” Eichel said. “What have we really put on the ice for a product for them this year? We don’t score goals, we really haven’t made them coming to the game worthwhile. So can you blame them? No, you can’t.

“This is the third year that I’ve been here and we haven’t put a steady product on the ice for them. It’s frustrating for us because they’ve been so loyal and they’ve continued to come here, continued to support the team and continue to be positive. I think that’s probably the hardest part.”