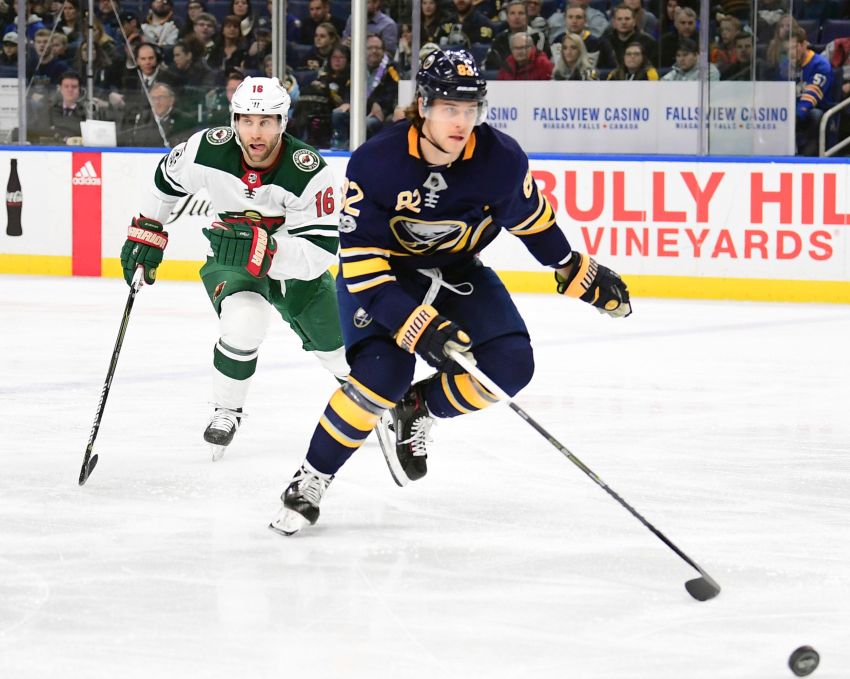 So far, Beaulieu, 24, has compiled zero goals, three assists and a minus-7 rating. An upper-body injury also sidelined him seven games.

Beaulieu has played in just two of the Sabres’ six wins.

“It’s never easy on a team that’s been struggling. … I feel I have a lot more to bring.”

Much of Beaulieu’s disappointment stems from his inability to produce offense. Of course, he’s hardly alone. Incredibly, Buffalo’s defense hasn’t scored a goal this season.

But Beaulieu has a history of scoring, including a four-goal, 28-point season with the Montreal Canadiens a year ago.

“I feel like I should be more involved offensively, that’s what I’m labeled as,” he said inside KeyBank Center. “They brought me in to be offensive, I’ve been struggling to find that, I haven’t been putting up much numbers. …

“If I’m not doing it right now, I got to find other ways to help out the squad. I’m not panicking, I’m not worried. I still believe in myself.”

Sabres coach Phil Housley said Beaulieu’s assessment of his game is “pretty correct.” To Housley, Beaulieu’s play without the puck could buoy his offense.

“When you’re not scoring a lot, you have to really focus on the defensive part of the game, because all those things will extend from it – your offense, the rushes, playing in the offensive zone,” Housley said.

Housley said the Sabres have been trying to make sure Beaulieu checks or seals his man down low.

“If you do that and eliminate people, it just seems like you have more of the puck,” he said. “They go hand-in-hand.”

The Sabres traded Montreal a third-round pick for Beaulieu in June, a cheap price for a former first-round pick fresh off a career offensive season. Housley understands Beaulieu’s upside could be tremendous.

Throughout Beaulieu’s struggles, Housley has kept playing him, giving him 19 minutes a game. On Friday, however, Beaulieu skated only 12 minutes, four seconds.

“I’ve never questioned their belief in me,” Beaulieu said. “You got to remember that there’s still almost 60 games left in the season, right? You got to take things in perspective. The injury kind of set me back a bit and coming to new team, it’s been a change for scenery for me.

“Obviously, it’s not the start I envisioned, personally and as a team. There’s a lot of hockey left to be played. In the last couple games, I think I’m trending in the right direction.”

Housley had no problem running defenseman Rasmus Ristolainen ragged during his return from an upper-body injury.

“When he says that he’s ready, he’s ready,” Housley said Friday morning. “We’re going to play him in all situations like we have in the past. I don’t see anything wrong moving forward.”

“After missing nine games, he’s tied for the lead in our defensemen in scoring (with five assists), so you know how important he is for our team,” Housley said.

With Ristolainen back, defenseman Josh Gorges was scratched. The Sabres also sent defenseman Casey Nelson back to the AHL on Friday morning.

Following an awful 8-3 loss Tuesday in St. Louis, Edmonton responded with a 6-2 win Wednesday in Detroit.

Still, the Oilers, who began Friday 8-12-2, have been a colossal disappointment in a season in which many picked them to contend for the Stanley Cup.

“Now we’re trying to pull ourselves back into the pack, if you will,” he said. “There’s a lot of marathon left but you can’t fall too far behind.”

Canadiens goalie Carey Price said Friday he plans to return from a lower-body injury tonight against the Sabres in Montreal. Price hasn’t played since Nov. 2.