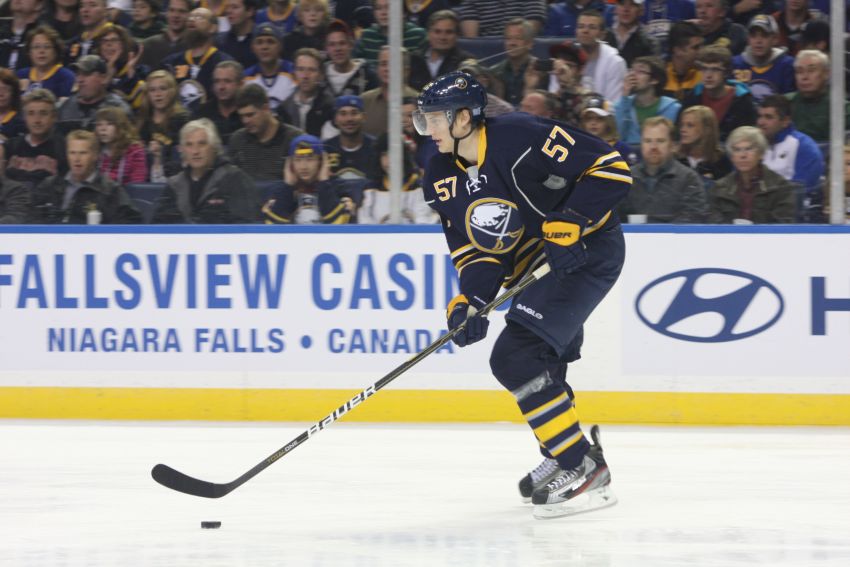 The money’s another symbol the youngster, who could’ve made a bundle more later on if he had re-upped for a shorter deal, ranks as one of the NHL’s great young defenders.

Two years ago, in fact, Myers, fresh off a dynamic rookie season, was arguably the best.

In 2010-11, the pressure to duplicate his rookie season overwhelmed Myers, who started so wretchedly he sported minus-15 rating at one point. By late winter, though, he was a force again.

Last season, with that awful October fresh in his mind, he over-focused on defense beside new partner Robyn Regehr, lost his aggressiveness and became a non-factor offensively.

When the duo was broken up, Myers played himself out of the lineup for a game. He roared back from the benching, and then broke his wrist. He played well later, although not at his freshman level.

Now, entering his fourth season, the franchise defenseman has one great season and two decent ones under his belt. There’s the new contract and additional pressure of leading the Sabres back to the playoffs.

Can he become one of the game’s best again?

Here’s a full look at the team’s defensemen heading into the summer.

Myers is humble, down-to-earth and devoid of any ego. He’s hasn’t changed much since arriving at a prospect camp four years ago as a 210-pound teenager.

The Sabres have some players who have probably gotten too comfortable after getting big money. Myers might be the opposite. He could put much pressure on himself. It’s something to watch for early.

Leopold already has 23 tallies over two seasons, the best two-year stretch by a Buffalo defenseman since Alexei Zhitnik in the 1990s. He topped the team in ice time during 2010-11 and averaged just less than Myers and Christian Ehrhoff last season. When injuries shelved the minute-munchers in January, Leopold stepped into the top role.

The American’s efficient and a steal at $3 million. He’s also a terrific dressing room presence, always available to talk and quick with a joke.

In the first year of his 10-year, $40 million contract, Ehrhoff underwhelmed. The slick German, the team’s ice time leader, had averaged 14 goals, 46 points and a gaudy plus-28 rating his last two seasons with Vancouver.

Teams keyed on his wicked shot. Two injuries sidelined him.

Nonetheless, Ehrhoff still had a presence – one the Sabres couldn’t replace (they went 3-11-3 without him).

Ehrhoff’s a star, no doubt. He’s probably never going win a Norris Trophy. But he could approach his old numbers again someday. The Sabres learned just how valuable he can be, even during a down season.

Weber’s still trying to establish himself after two full seasons. He sat 20 of the first 22 games in 2010-11 before cracking the top six. With three new defensemen last year, he sat 15 of the first 16 contests, played regularly for almost three months and sat again, his team-worst rating dooming him.

At his best, Weber’s a gritty, relentless presence who doesn’t give an inch. He probably wasn’t as bad as his rating indicated. Still, he wasn’t exactly a shutdown defender.

The Sabres have seven NHL defensemen and Brayden McNabb ready to graduate from Rochester. T.J. Brennan, a strong prospect, must also clear waivers. Weber could be the odd man out.

Despite his poor rating, Regehr, the gritty veteran defenseman the Sabres coveted, mostly had the impact they expected during first season.

As a limited point-producer, his rating can dip easily. He’s another strong dressing room presence and a fearless player. Remember when he fought 6-foot-9 Boston defenseman Zdeno Chara on Nov. 23?

Sekera often plays a slick, steady game. He’s a first-rate skater and can eat minutes. But he’s never truly busted out and enjoyed a strong campaign from start to finish.

The Slovak should produce more points. He’s certainly capable, having compiled 16 in a 15-game stretch late in 2010-11. He’s usually a healthy scratch at some point each season. He made it through last year, although he struggled mightily late.

Puck-rushers usually take a long time to develop. Former Sabres star Brian Campbell never earned regular duty until he was 26 years old. Sekera’s way ahead of Campbell at this point. Perhaps he finally busts out next season.

Sulzer arrived from Vancouver in February as an extra and ended the season as a 20-minute regular, forming a strong duo beside Ehrhoff, his countryman. That earned him a spot to lose in training camp.

Sulzer had never been a regular before. He played 12 times in five months with the Canucks and sparingly with Nashville and Florida earlier.

His body of work with the Sabres is small but impressive. He’s composed, strong defensively and underrated offensively.

Next season will prove if his late-season performance was a fluke or not.

McNabb, 6-foot-5 and 216 pounds, is a future star. He’s physical, aggressive and looks like he could hit the 40-point mark someday.

He impressed during his first pro season, earning an AHL All-Star nod and some big NHL minutes during the winter.

While he looks ready to graduate from the AHL, the Sabres have seven defensemen. Something’s got to give.