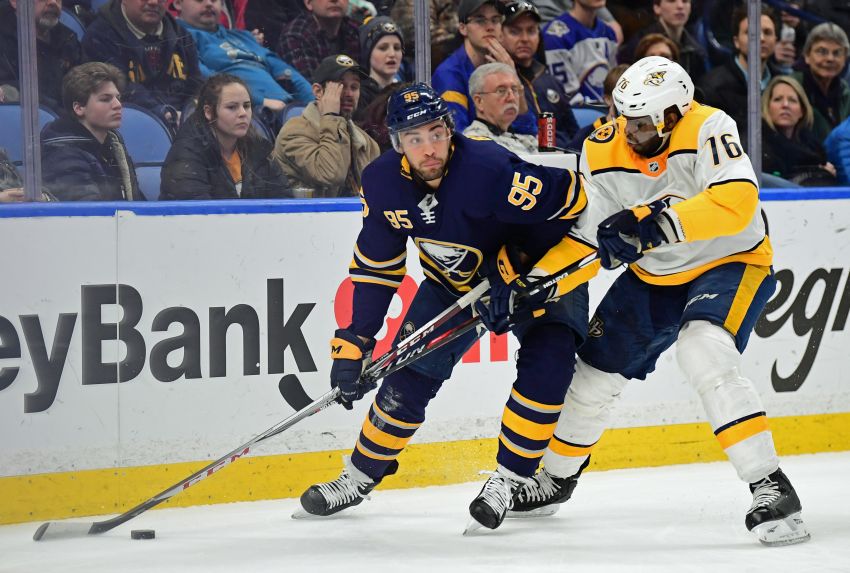 BUFFALO – These final weeks of another forgettable Sabres season are about playing for pride and experimenting. So even when things go well, coach Phil Housley might try something new.

For example, over the last two games, the line of Justin Bailey, Nick Baptiste and Evan Rodrigues showcased its chemistry and speed. But tonight against the Arizona Coyotes, Bailey will skate at left wing beside top center Jack Eichel and Kyle Okposo.

“Bailey, Rodrigues and Baptiste were really good the last two games, especially when (winger Zemgus Girgensons) went out against Chicago,” Housley said this morning inside KeyBank Center. “But we’re just trying to find some balance, moving guys around to get some more scoring.”

So Bailey, who has played with Eichel before, will get another crack on the top line. Bailey understands he must utilize his speed if he wants to stick around. Tonight will be his 52nd NHL appearance.

With goalie Robin Lehner still banged up, Linus Ullmark will be tonight’s backup. Lehner skated with his teammates this morning.

Here are the rest of tonight’s lines from left to right:

“We’re playing a brand of hockey that we envisioned early on,” Housley said. “Certainly, there’s a lot of areas of improvement that we’ve got to continue to improve on, and that’s getting to the net and getting to the dirty area, our zone-one chances – we’d like to see that increase – and our shot mentality.

“But we’re going to continue to hammer that message. For right now, I think for all the lineup changes and the guys who have been banged up and been out, the guys have done a good job of really making that commitment.”