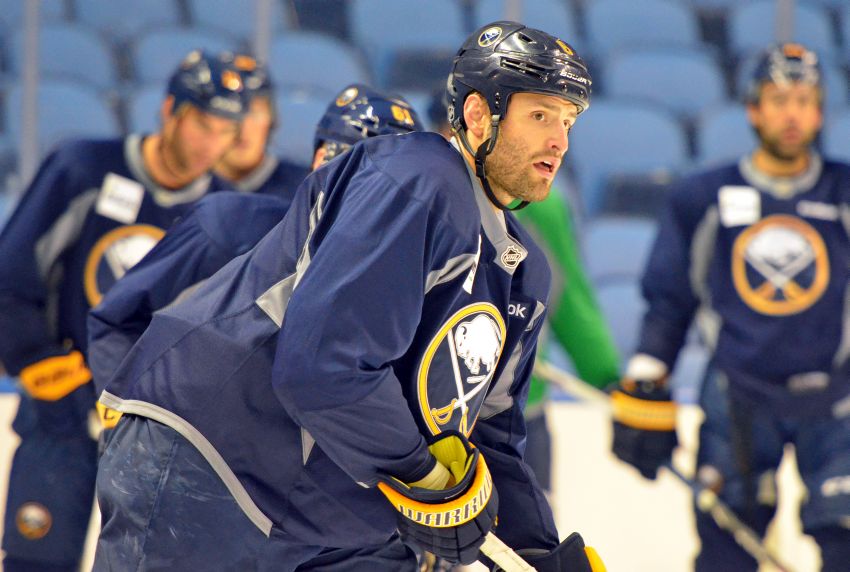 BUFFALO – In a hockey-crazed town, with social media at everyone’s fingertips, gritty Sabres defenseman Mike Weber felt the wrath of a disappointed fan base last season.

Weber accumulated a wretched minus-29 in 68 games during the tumultuous campaign, becoming the fans’ top whipping boy. They wanted the Pittsburgh native benched.

Still, despite the NHL’s 881st rating, Weber played every game over the final four months.

“A lot of people get to have a voice,” Weber said Thursday after the Sabres prepared for tonight’s preseason finale against the Carolina Hurricanes. “You got to respect it. (In) the same breath, I come work every day. I come here to get better. I come here to do whatever it takes.

“You take what those people have with a grain of salt, whatever their backgrounds are.”

Respect helped keep Weber in the lineup. Sabres coach Ted Nolan has talked about the prideful Weber’s character and passion. His mistakes often come from aggression. He tries too hard.

“The one thing I’ve known since I’ve been here is he is a character guy,” Nolan said. “If he’s going to make a mistake, it’s going to be a mistake not for the lack of trying. Last year was a very tough year for him.”

Nolan noted the Sabres’ new coaching systems and defensive schemes could reign in the ultra-aggressive 26-year-old.

Weber has been adamant – “Enough’s enough,” he said in April. “Joke’s over.” – the Sabres must change the culture and create a higher standard. He knows he can’t repeat 2013-14.

“I’m willing to do whatever it takes to be a regular face here and earn the respect of the fans and the media back,” said Weber, who debuted in 2007-08 and is the team’s longest-tenured defenseman.

Weber has likely earned a spot on the 23-man roster, possibly as the No. 6 defender. Nolan said the Sabres will probably keep seven defensemen, so when Mark Pysyk returns from an upper-body injury, Weber could be pushed out.

He also has some competition from Tyson Strachan, a defenseman many ticketed for Rochester when the Sabres signed him July 3.

The 29-year-old could still be assigned to the AHL, but given how often defensemen get hurt, Strachan will almost certainly see some NHL action this season. He’s probably eighth on the depth chart.

Strachan has shuttled between the two leagues since 2008-09, so he’s used to the uncertain days leading up to the season.

“I think it’s probably impossible not to play out scenarios in your head,” Strachan said. “But at the same time, I’ve been through this for a lot of years. You figure out after a while that doesn’t really do you any good to worry about things.”

The 6-foot-3, 215-pound Saskatchewan native has played 138 NHL games, including 18 with Washington last season. He showcases a physical style similar to Weber’s.

“I’m the type of player, the cog in the wheel, I guess,” Strachan said. “I hope it’s a cog that they need here. I just come to work and do my thing every day.”

Strachan displayed some flash in Wednesday’s 6-1 exhibition win against the Capitals, making a nifty pass from the point to Marcus Foligno as he zoomed to the net and scored.

“Then he saw it,” Nolan said. “As the game went on, he started getting a little bit more comfortable. The thing we’re trying to do here is create an environment where people feel comfortable within themselves and try things.”

Strachan’s feeling comfortable with his decision to sign a one-year, two-way contract with the Sabres. They promised him would be able to compete for an NHL roster spot.

“It’s always a tough thing when you’re going free agent in July trying to make decisions like that,” Strachan said. “Honestly, that was what they told me in July. I think that’s exactly what they’re doing now.

“Really, at the end of the day, that’s all you can hope for and all you can appreciate is getting a fair look and getting an opportunity, and what you do with it is on you. That’s the way it should be.”

One thought on “Sabres’ Mike Weber ready to rebound from poor season: ‘I come here to do whatever it takes’”