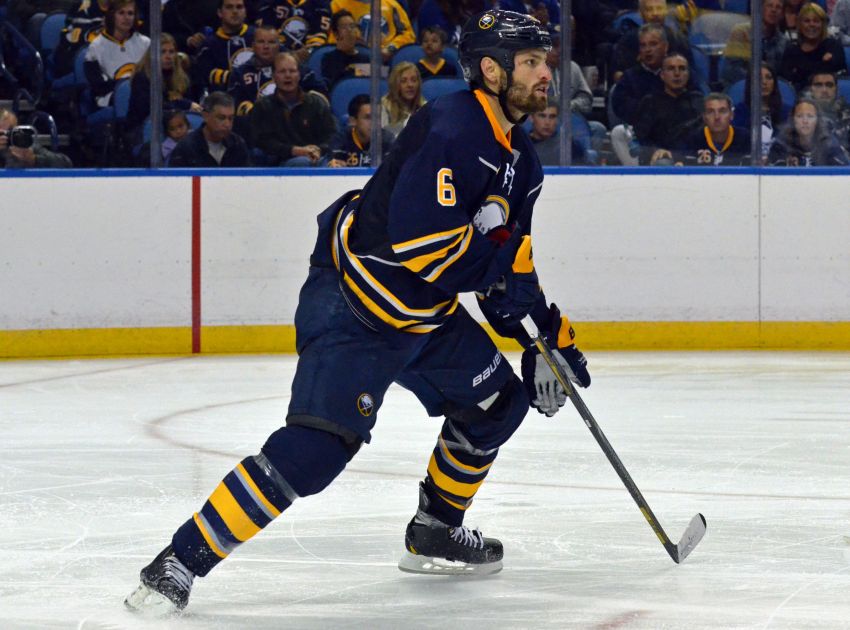 BUFFALO – Ron Rolston noticed Mike Weber’s patience and resolve long before he began coaching the Sabres, back when the gritty defenseman was often sitting as a healthy scratch, sometimes for weeks at a time.

“Everything was about the team and he’d get his opportunity,” Rolston said Saturday inside the First Niagara Center. “Just his overall attitude is exceptional.”

That attitude’s finally paying off.

Barring injury, on Wednesday in Detroit the 25-year-old will have a spot in the Sabres’ opening-night lineup, an honor that eluded him his first three full NHL seasons.

“It’s going to be an awesome feeling to play,” said Weber, a veteran of 174 NHL games.

“He’s never gotten himself down low and quit on everything his whole entire life,” Ott said. “He’s always found a way to battle through it and put in extra work and be better. He always felt like if there was reason he couldn’t be in the opening lineup … you need to work harder and get better.”

Weber called his arduous journey “a heck of a ride.”

“It’s never been enjoyable process,” Weber said. “But I think it’s been a huge maturing process for myself and learning. I’ve watched a lot of hockey.”

Weber has mostly watched at the beginning of each season, repeating an odd cycle three times.

The Pittsburgh native sat the first eight games and 20 of the opening 22 contests as a healthy scratch in 2010-11. He watched the first 10 games and in 2011-12 and the first five last season.

“It was tough,” said Weber, who signed a three-year, $5 million contract in June. “That’s all in my past now.”

Each season, however, Weber eventually carved out regular action, playing 58, 51 and 42 contests.

But Weber wasn’t just watching all those games. He was dissecting and studying the action to become a consistent, nightly force.

“There’s a lot of solid defensemen that play a similar role to myself and have successful careers because of their consistency,” Weber said. “They’re not the most talented guy on the team, but every championship team has one or two of those guys. I’m just trying to build myself into being one of those reliable, solid guys that can be counted on night in, night out.”

Weber started morphing into that consistent presence under Rolston, who dressed him for every game after taking over for Lindy Ruff on Feb. 20.

“He stuck with what’s going to make him a great NHL player,” Ott said. “I think he’s finally been at a point where he’s solidified himself in the NHL where all the naysayers are gone and it’s just, ‘Mike Weber’s our strong defensive defenseman.’”

Weber added: “I have to be consistent or I can come (out) at any moment. That’s the way I treat it.”

“He’ll go down and block a shot on two knees,” Rolston said. “It could hit him right in forehead, and that’s the kind of player he is. He’s simple. He’s good positionally. He makes a good first pass. He knows what he is.”

Right now, Weber’s also a mentor. Rolston has been playing him beside 18-year-old Rasmus Ristolainen, the eighth overall pick in June.

“Ron’s felt comfortable with putting me with some younger guys, some extremely talented players,” Weber said.

Rolston said Saturday that Ristolainen had earned a roster spot. The Finn and Weber could skate together again Wednesday against the Red Wings.

Both the rookie and the veteran would be fulfilling dreams on opening night.

“One of Mike’s main goals was to be an opening-night roster player, and I told him he already deserved that from the way he finished out last year,” Ott said. “I thought he was one of our best D-men, most consistent. You add all those intangibles and he’s proven himself.”