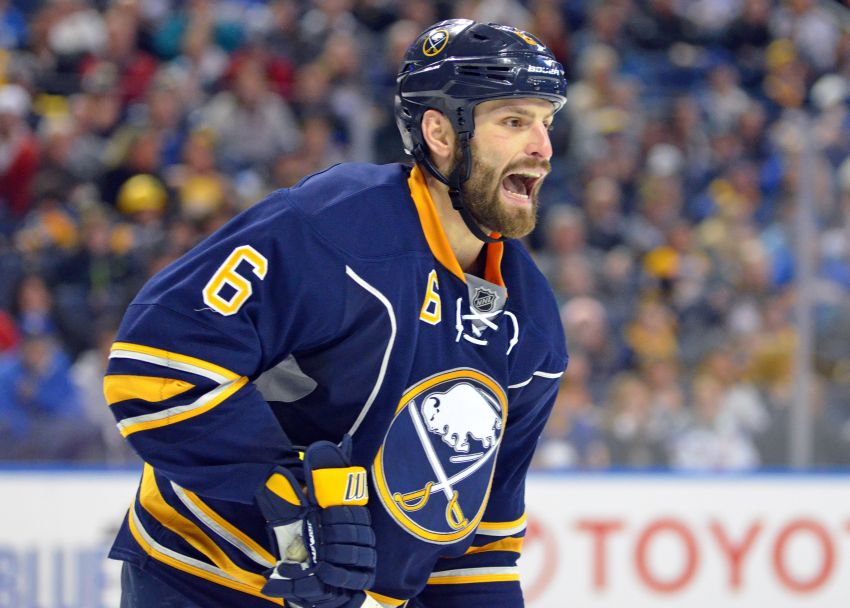 Mike Weber is an NHL-worst minus-32 this season. ©2014, Dan Hickling, Olean Times Herald

BUFFALO – Mike Weber knows the number looks terrible. In 43 games this season, the gritty Sabres defenseman has accumulated a stunning minus-32, the NHL’s 824th and worst rating.

In what was supposed to be his breakout campaign, Weber has become one of the fans’ whipping boys during the worst season in franchise history.

But Weber believes his big minus rating is a bit misleading.

As a defensive defender, the 26-year-old’s never going to compile many points for a plus rating. He’s been on the ice for six Sabres goals all season, according to extraskater.com.

The Sabres have a ridiculous minus-64 goal differential. No other team is below 48. Three teammates are a minus-19 or higher, so he’s hardly alone.

To Weber, he’s still playing the hard, ultra-intense style he needs to be successful, and that’s what matters most.

“I personally think I’ve been playing well,” Weber said Saturday inside the First Niagara Center. “Obviously, the stat doesn’t look good. I feel like I’ve been doing my job. It’s just one of those seasons things have been falling on me. …

Still, Weber knows, “When you’re that big of a minus, you got to look at it a little bit.”

“When you’re giving up as much as we did early on, someone’s going to take the brunt of that,” he said. “It’s on me so far.”

But the American’s not going to change his style six years into his career.

“The reason I’m in this league is the way I play,” Weber said. “I have to play tough. I have to play in your face. I have to hit. I have to block shots. I have to kill penalties. I’m a defensive defenseman. Statistically, it says I haven’t done a very good job of that.”

Sometimes, interim Sabres coach Ted Nolan said, Weber plays too hard. He wants to do too much, so he gets caught out of position.

Nolan is a big Weber supporter – “You never question his desire and his compete level,” he said – but he wants him “to calm down.”

“When you have your ups and downs throughout the season, the only way you work yourself out of it is to try to be consistent at what you are good at,” Ott said. “Webby’s still eating a lot of blocked shots. He’s sacrificing his body on a nightly basis. He’s playing physical.”

Ott believes plus-minus is “the worst stat in the game” and “useless.”

“That’s something that I know probably frustrates him,” he said. “But at the same time, the rest of his game has been solid, and that’s something he can take a lot of pride in.”

Trailing in so many games doesn’t fit well with Weber’s style, Ott said.

“We haven’t been in those defensive, shutdown roles,” he said.

Weber thinks he’s handling the trying season well. With a young son, Emerson, at home, he has a new perspective.

“I put a lot of pressure on myself,” Weber said. “I’m my hardest critic. But it’s a different feeling when you leave the rink now and you go home and you have no choice but to put the game away and be a dad. That’s the most important thing.”

Weber said this season is “where you find true character.” He mentioned mighty Chicago, an also-ran for years, and said he hopes the rebuilding Sabres can follow the Blackhawks’ path.

“A lot of this young core is going to be here for a lot of years,” he said. “We’re going to remember how bad this sucks and hopefully as we continue to grow and get better as a team we use that as fuel later.”