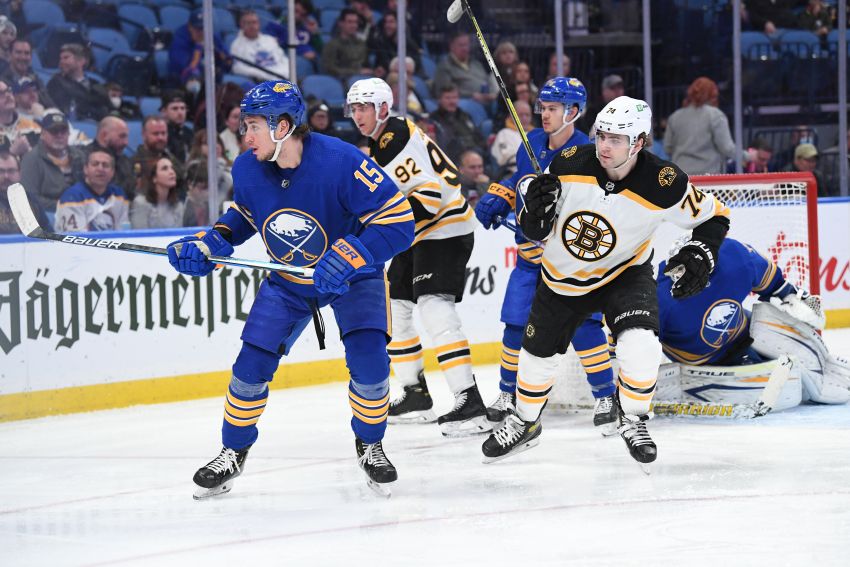 BUFFALO – In explaining why Aaron Dell would start against the Boston Bruins, coach Don Granato called him the Sabres’ “hotter” goalie.

Dell, of course, wasn’t exactly lighting it up – he began the night winless and sporting an awful .874 save percentage – this season.

But having pulled goalie Dustin Tokarski from his last two starts, Granato said he wanted to give him a chance to “sit back and breathe and get back to form.”

So Granato, whose options are limited with No. 1 goalie Craig Anderson injured, utilized Dell on Wednesday.

“We needed a change,” Granato said on a Zoom call. “It just needed to happen. Dustin came in and was good. He looked real good. He looked comfortable. It took him a couple minutes. Obviously, it’s tough to jump, but he looked like himself in there, which was great after not looking so much like himself last game. That was definitely a positive.”

It was one of the few positives the Sabres can take from Wednesday’s game before a season-high crowd of 9,416 fans inside KeyBank Center.

The Sabres, if you’re keeping track, have lost four straight games, allowing  22 goals during the skid. In each game, they’ve melted down for a short period, a disturbing trend they can’t buck.

“Tonight was a product of them just shooting everything,” Okposo said. “They made it a point, especially in the first and third, to to just throw everything at the net and crash. We just didn’t do a good enough job clearing the second opportunities and they were able to cash in on that. The best way to eliminate that is spending more time in the O-zone. We just didn’t do it enough in the latter half of the first period and in the third, especially.”

“We have to fight through and compete,” Granato said. “If it’s going to change, it’s going to be those core (things), competitiveness.”

If it’s going to change, the Sabres also need better goaltending. Following his short night Wednesday, Dell has compiled a 0-4-0 record with a 4.56 goals-against average and an .862 save percentage in five games this season.

After Dell stopped an early two-on-one, Sabres winger Kyle Okposo opened the scoring just seconds later at 10:56. But that was his biggest save of the night. Dell looked weak letting Charlie Coyle’s high shot from the right circle beat him.

“Never have I been comfortable as a coach trying to say it’s a goaltending thing,” Granato said. “Even if at times you thought maybe that could’ve been a save, you still look at the things that led to that and work to improve those. So if that’s the case and it was a goal that we didn’t like it, there’s other things that we can turn our attention that are within are control to become better at, and we have that opportunity to become better at it.

“So this little stretch is exposing us to things that we need to target and become better at, and we will.”

“We just talked about playing our game,” Okposo said. “We’re playing a veteran team over there that isn’t going to stray away from their game. Whether they’re up 4-1, down 4-1, they’re going to play the same way. We knew that we needed to get more pucks to the net and spend more time in the offensive zone, just get it behind them. We did that for the second period. Give our guys credit for that.”

One thought on “Sabres melt down early, fall to Bruins; Aaron Dell yanked after one period”