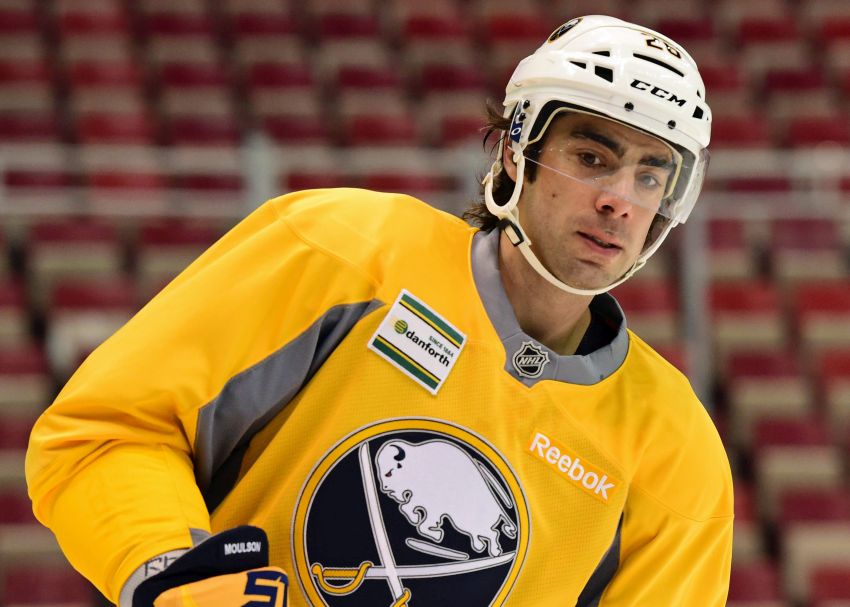 BUFFALO – Matt Moulson’s move up to the wing beside No. 1 center Ryan O’Reilly and Evander Kane is hardly a promotion for the struggling Sabres veteran, who hasn’t scored in 35 straight games entering tonight’s tilt against the Detroit Red Wings

“I don’t like where his game has been at,” Bylsma said. “But we’re in a situation tonight where we’re going give him a chance to get his game where it can be, where it needs to be for us. He’s played next to Ryan for a 10-game chunk during this year with Brian Gionta. … He should and needs to … be in a top-six role.”

It’s been repeated for months, but Moulson, 32, has endured a brutal season. The three-time 30-goal scorer hasn’t scored since Nov. 1.

Clearly, Bylsma’s frustrated with Moulson, who has four goals in the second season of a five-year, $25 million contract. Bylsma scratched Moulson on Dec. 30. Moulson has mostly skated on the fourth line for the past month. He’s played less than 10 minutes in six of the last seven games.

What does Moulson have to get back to?

“I think just getting to the net, making plays, make sure I’m controlling the puck, especially in their zone and make sure I’m moving my feet,” Moulson said.

To replace Reinhart, the Sabres recalled forward Cal O’Reilly from Rochester, where he has four goals and 23 points in 35 games. The Sabres placed winger Zemgus Girgensons (upper body) on injured reserve to create a roster spot. O’Reilly practiced with center Jack Eichel and Jamie McGinn this morning inside the First Niagara Center and also skated on the second power play unit.

O’Reilly had one assist in two games earlier this season.

Bylsma said he’s confident Reinhart, who collided with Colorado’s John Mitchell on Wednesday, will be ready after the NHL All-Star break early next month.

In other news, defenseman Josh Gorges (upper body) will sit out for the second time in three games. Jake McCabe will move in after sitting once. Goalie Robin Lehner, fresh off a 33-save effort in Wednesday’s 2-1 loss, will start his fourth game this season and third in the last week.