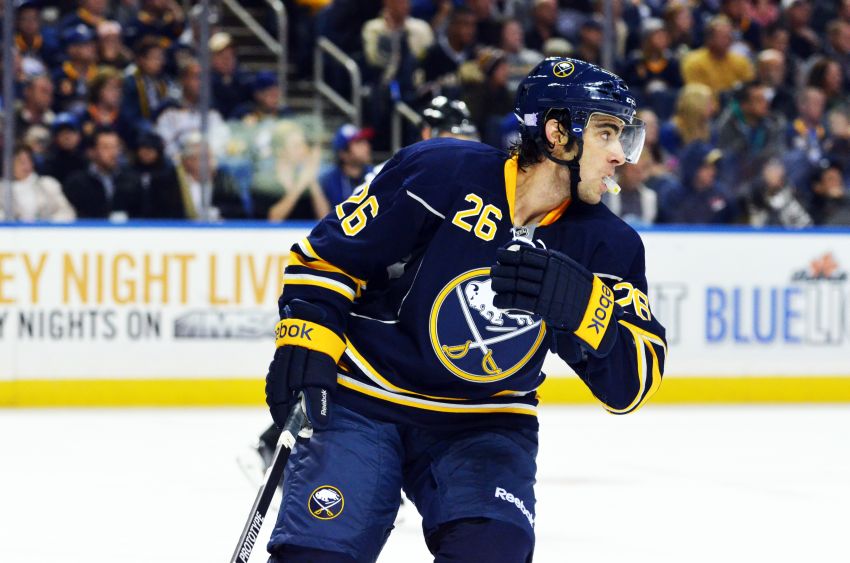 BUFFALO – Four years ago, Matt Moulson’s career reached what he called “a fork in the road.”

Having spent the final six months of 2008-09 in the minors before Los Angeles let him go, the new Sabres winger began fretting.

At that point, Moulson had six goals in 29 NHL games. But at least the Kings had given him a shot. Pittsburgh, which drafted Moulson 263rd overall in 2003, never even signed him.

“It was kind of make the NHL or be a 26-year-old guy trying to make it in the minors,” Moulson said Tuesday following practice inside the First Niagara Center, a day after scoring twice in his debut.

Moulson, who has an economics degree from Cornell, began thinking about other options.

“I said, ‘Thank God I went to school,’” Moulson recalled. “I had something to fall back on.”

But Moulson wasn’t ready to quit hockey. The New York Islanders, who traded him to the Sabres with draft picks Sunday for Thomas Vanek, gave him a two-way contract that July.

“I didn’t really give them a chance to send me down,” he said.

Moulson said he scored in every 2009 preseason appearance, earning an NHL roster spot out of training camp.

“The rest is history,” Moulson said.

But what else happened to Moulson? How could he develop from a journeyman into an elite goal scorer so quickly?

“I think there’s a lot of different things,” Moulson said. “I was a different player on the Islanders than I was with the Kings. I have a lot more confidence. They gave me a lot more opportunities playing power play. Playing on the first line will definitely get your confidence up and give you those extra chances.”

Moulson played 19:48 in Monday’s 4-3 loss to Dallas, scoring on his first shot and becoming the third Sabre to tally twice in his debut. Bob Sweeney and Steve Bernier are the others.

“I thought we had some good jump,” said Moulson, who had four shots. “Those two guys are easy to play with. … You see your name on a line with those two guys, and you know they’re great players. But you always wonder if you’ll have chemistry and mesh well together. I think we did (Monday). I think we’ll only get better.”

Hodgson and Ennis will do most of the playmaking. Moulson, meanwhile, loves going to the net. He buried Ennis’ pass in the slot and scored from in front, his first even-strength goals this season.

“They both did a great job getting pucks through the neutral zone,” Moulson said. “I like to have it in my hands as little as possible unless it’s around the net. So I think that fits well with Enzo and Cody.”

“He knows what play to make before it happens,” said Ennis, who’s playing right wing for the first time ever. “In front of the net he’s unreal. As long as me and Cody can find him the puck, he’s going to have a good chance to put it in.”

Moulson hasn’t had a chance to settle down in Buffalo. He left his family wife, Alicia, and two small children in New York at 4:30 a.m. Monday. They’ll be joining him when his newborn son, George, can travel.

“My wife always says I play my games when I’m tired,” Moulson said following the game. “I’m going to have to stay up until 2 in the morning every day, I guess.”

Did he sleep better Monday night?

But at least he’s said he’s feeling more comfortable. He said Monday night he hadn’t felt so nervous since his NHL debut.

Teammates’ wives and owner Terry Pegula’s wife, Kim, have reached out to Alicia Moulson. And hockey players, well, they’re “a little different than some guys,” he said.

They make it “easier to get acclimated,” Moulson said.