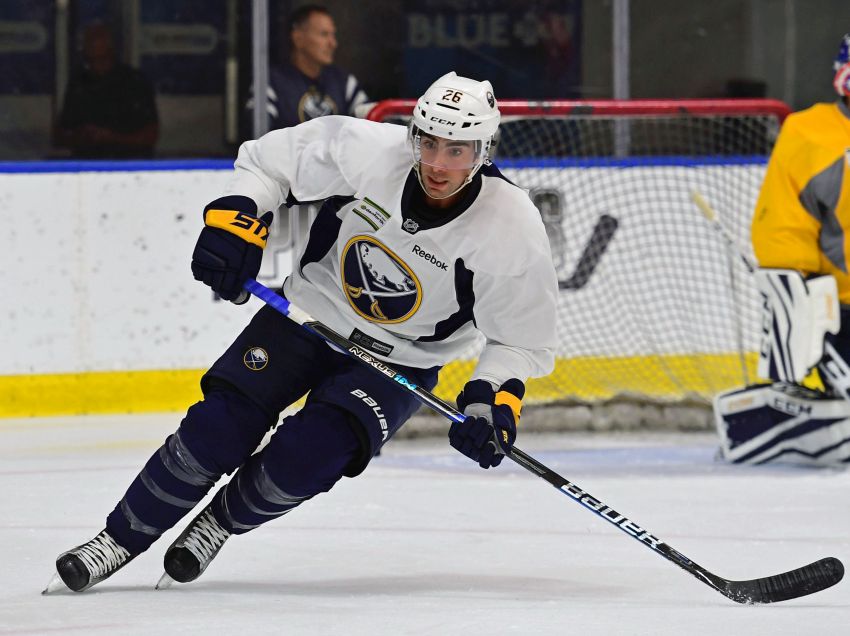 BUFFALO – Sabres winger Matt Moulson knows he has plenty of doubters. The former 30-goal scorer understands following a miserable year punctuated by his general manager challenging his work habits, some support for him has eroded.

Moulson, 32, has clearly been humbled. An eight-goal season can do that. So can drawing Tim Murray’s ire.

“I definitely have a chip on my shoulder coming in to prove a lot of people wrong that maybe lost a little belief,” Moulson said Friday following the first sessions of training camp. “I have a trainer, a skating coach, my family, maybe a couple close friends who truly believe in me.

“I think summer was about making sure I put in the work and believe in myself to get back to where I want to be. I think I’ve done that. I have a lot to prove.”

Moulson, who lost “a couple pounds” over “a big summer,” looks slimmer. He said he took a week or two off following last season and started “getting after it.” He began skating three or four times a week in May and also worked with a trainer and a skating coach.

Of course, Moulson, who’s beginning the third season of a five-year, $25 million contract, won’t simply be given ice time this season, according to Sabres coach Dan Bylsma.

“He’s pretty blunt in what he says,” Moulson said. “He doesn’t mince words. I know I have to earn everything. That’s what I’m here to do.”

Through two days of camp inside HarborCenter, Bylsma has noticed Moulson’s determination and tenacity, especially down low, where the underachieving veteran’s at his best.

“I’ve seen a lot more out of him in his play … playing down low,” Bylsma said. “Today, he chipped the puck in, went physical on the defenseman, won the puck battle, knocked the guy down in the offensive zone and hung onto the puck. I can see it in how he’s played the first two days here.”

Moulson started changing his work habits prior to ending his stunning 44-game goal drought Feb. 16. In early March, perhaps to keep prodding him, Murray said on the radio Moulson “has neglected some things in the last couple years as far as how workouts are changing, how we as an organization are changing with our young players and even our players on the team.”

Murray said then Moulson was responding to the challenge. In their end-of-season meeting, Moulson told Murray his comments ticked him off.

When the Sabres gave Moulson a new plan, they knew they likely wouldn’t see any results until 2016-17. Still, it might’ve helped a bit late last year, as Moulson scored three goals in his final six games.

“I think putting in a lot of extra work last year during the season when things weren’t going well may have paid off a little bit at the end,” Moulson said.

If Moulson, whose goal production has dropped three straight years, approaches even a 20-goal clip, he could earn another spot on a scoring line. After scoring four goals in his first 12 outings last season, Bylsma mostly relegated him to fourth-line duty as he slumped, skating him short minutes. He was even scratched once.

A productive Moulson – remember, he scored 30 goals in each of his first three NHL seasons – could be reunited with newcomer Kyle Okposo, his frequent linemate with the New York Islanders. Moulson and Okposo are close.

Like Bylsma, Okposo won’t be afraid to give Moulson an honest opinion.

“He’s a great asset to this team and this organization, just having him there to have an extra person to talk to and get their true feelings,” Moulson said. “He’s not going to sugarcoat it.”

Saturday’s scrimmage featured some unusual intensity for a 40-minute contest just two days into camp. At one point, wingers Nick Deslauriers and Evander Kane shoved each other during a scrum.

“Absolutely, absolutely,” he said. “I liked every part of it. I liked us at the net. I liked us protecting the net. I think if you got really close you would’ve saw more of a smile than an angry face in there.”

Bylsma said he plans to meet with center Jack Eichel, who just spent three weeks at the World Cup of Hockey, and review the next three days. Eichel hasn’t practiced with the Sabres yet.