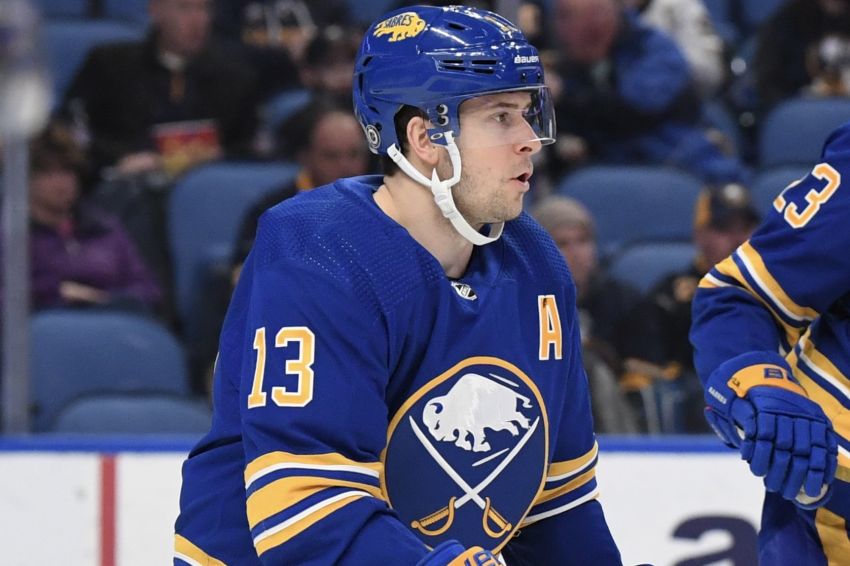 BUFFALO – At first, Sabres winger Kyle Okposo wasn’t sure if Mark Pysyk, his new teammate, might be serious. The defenseman always delivers his quips with a straight face.

“If you just met him, you’d probably think he’s not a very nice person,” Okposo said prior to Tuesday’s game at KeyBank Center. “But he is. He’s just goofing around.”

Okposo has learned the quick-witted Pysyk, who played his 500th NHL game Tuesday, a 6-3 win over the New York Islanders, has a line for everything.

“Never not joking,” a smiling Okposo said. “He literally – it’s probably two percent of the things that come out of his mouth are serious. So, yeah, he’s a funny guy.”

How funny is Pysyk? Well, Okposo said the 10-year veteran, someone he called “one of a kind,” could pursue comedy as a career.

“He could probably be on ‘SNL’ if he really wanted to,” Okposo said. “Like, he’s just that witty, that funny. Everything’s on his toes and it’s off the tip of his tongue. It’s hilarious. He adds a huge dimension to our room of just keeping things light, keeping everybody engaged. He’s been awesome to get to know and I can’t say enough good things about him as a teammate.”

He added: “That’s the beauty of our team, is you can do whatever you want, however you prepare for games, and you’re not going to get judged for it. Nobody’s going to think differently of you as long as you’re ready to go when that puck drops.”

On the ice, Pysyk, who signed a one-year, $900,000 contract to return to Buffalo, his first NHL team, has given the rebuilding club a calm, consistent second- or third-pair defender. He entered Tuesday as one of only three Sabres to have a plus or even rating.

Still, after playing the first 46 games this season the Sabres scratched Pysyk, 30, for Sunday afternoon’s 5-3 win over the Montreal Canadiens.

Right now, Sabres coach Don Granato wants to utilize his seven healthy defensemen, so he has been rotating a few. In Montreal, it was Pysyk’s time to sit. On Tuesday, Robert Hagg was scratched. Jacob Bryson sat out last week.

“We have liked Fitzgerald and Samuelsson together,” Granato said of the pairing.

Pysyk, the 23rd overall pick by the Sabres in 2010, said he “absolutely” understands he might need to occasionally watch a game.

“You look at what we’ve got on defense right now, we have a lot of guys,” he said.

So Pysyk had to wait two extra days to hit the 500-game milestone.

“It’s been some highs, some lows on the way here but to get here is pretty cool,” said Pysyk, who made his NHL debut on March 17, 2013 in Washington.

The Sabres honored Pysyk with a video tribute during an early stoppage. During warm-ups, his wife, Oakley, sat in the front row with their daughter, Mylo, who held a sign that said “Happy 500 Daddy.”

Despite the Sabres’ weak record – they’ve won just 16 games all year – Pysyk has enjoyed this season. He re-signed with the Sabres in part because they offered him a chance to stay on the blue line. For two seasons, he moved between defense and winger.

“The on-ice has been better than the last couple of years personally so I think that adds to it,” he said. “But I’ve been having an absolute blast. It’s fun to be here.”

Granato said Pysyk has “a lot of good years ahead of him” and can keep growing.

“He has a younger mindset in the sense of he’s still trying to get better, he’s still investing,” he said. “Sometimes you get a little older and the guys have invested so much you just want to return, and they don’t focus on improvement and getting better. But he has done a nice job with that.

“I watched a lot of film on him over the summer. I think he’s come in here with some intent about making himself better, evolving at his age into more as a player.”

Granato said he expects Hagg to sit out one game.