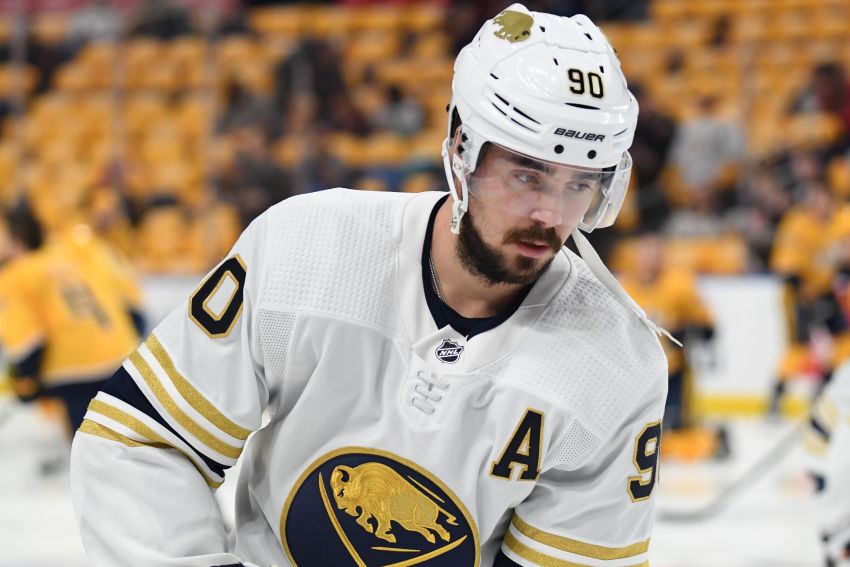 Marcus Johansson is frustrated by his play. ©2019, Hickling Images

BUFFALO – Even during the opening weeks of the season, as Marcus Johansson scored goals and solidified himself as the Sabres’ No. 2 center, his play irked him.

“I didn’t feel like myself with the puck and stuff like that,” said Johansson, who scored four goals and seven points in the first nine games. “I mean, sometimes you still get points and the team wins. You kind of don’t think about it as much.”

These days, Johansson, 29, thinks about his game a lot – probably too much. The Swede has scored just once in his last 20 outings entering this afternoon’s home contest against the Los Angeles Kings.

“He is at times too hard (on himself) and needs to lessen up there because we are definitely optimistic about where he’s going to end up,” Sabres coach Ralph Krueger said following Friday’s practice inside KeyBank Center.

While Johansson feels some of his recent outings have been better – he ended his 13-game goal drought Dec. 7 – he’s not exactly pleased.

For example, in Tuesday’s 5-3 road loss to the Toronto, his late giveaway led to the Maple Leafs’ final goal.

“I still got a lot to go to get to where I usually am and I know I can be,” said Johansson, who has been skating on top power play. “But I feel like it’s been a little bit better but not where I know I can be and I want to be.”

Johansson has a history of scoring, having produced two seasons of 20 or more goals and five seasons with 40 or more points.

Krueger said Johansson “wants really to be an impact player.”

“He wants to make a difference every day,” he said. “I think he’s still finding his A-game every single day but he’s working hard at it. He’s part of the group as far as the way he’s coachable, the way he’s taking leadership off the ice, and we’re expecting him to still go to another level because of the path he’s on.”

But Johansson believes his problems started before then.

“I just haven’t felt like myself all year,” he said. “But I guess it’s good that there’s room for a lot of improvement.”

Johansson wants to use the upcoming Christmas break – the Sabres have three days off following Monday’s road game against the Ottawa Senators – to recharge.

“Hopefully it can turn around here and with a good few days off here soon,” he said. “(I’m) looking forward to that and kind of (getting) a little bit of a fresh start afterwards.”

Johansson, of course, is hardly alone in his offensive struggles. The Sabres need more secondary scoring.

– Winger Conor Sheary has a six game-goal drought and just two scores in his last 26 appearances. Sheary scored four of his five goals in two games.

– Winger Jimmy Vesey has scored one goal in his last 10 games and four goals in 33 games.

The Sabres are especially thin down the middle.

With the Sabres’ top scorer and most dynamic presence sidelined, Kruger moved Johansson up to pivot the top line between Victor Olofsson and Sam Reinhart.

“I don’t think anyone in the world can fill Jack’s shoes right now,” Johansson said. “We missed him. You go down 3-0, you miss your best player and one of the best players in the world. It’s a tough uphill battle.”

Eichel, who practiced Friday, could play against the Kings. But an upper-body injury will sideline Johan Larsson, who has been a strong presence in recent weeks.

Johansson, who hasn’t played center regularly since his rookie season, practiced between Skinner and rookie Rasmus Asplund on Friday.

“It keeps you involved,” Johansson said of playing center. “You’re involved offensively and defensively. I like that. It gets you into the game quickly and you feel like you’re always a part of something on the ice when you’re out there.”