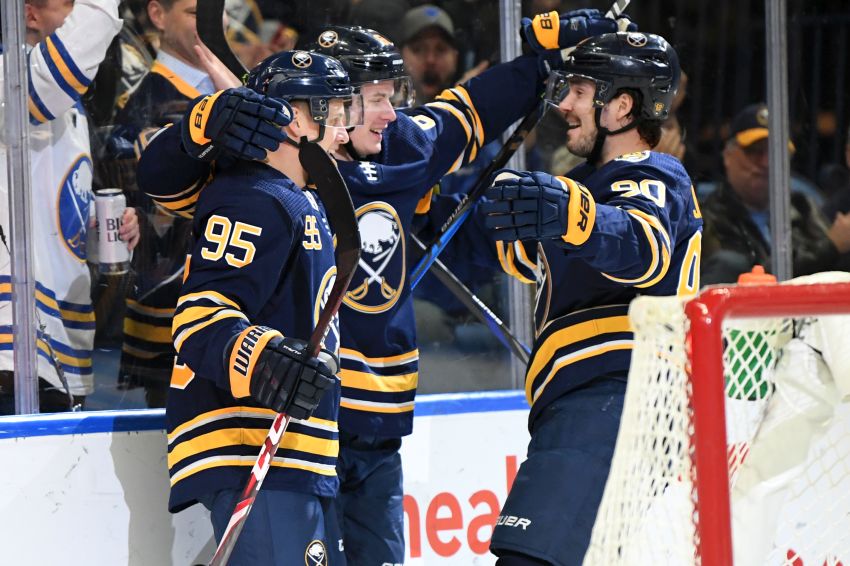 BUFFALO – Marcus Johansson and Victor Olofsson started developing their chemistry in September, when they spent part of training camp as linemates.

But nearly six months passed before the Swedes shared any meaningful ice time during the regular season.

Olofsson, 24, earned a plum assignment at left wing beside top Sabres center Jack Eichel and Sam Reinhart, and he thrived there nearly all season, morphing into one of the NHL’s top rookies.

Then last week, with the Sabres out of the playoff chase and struggling to score, coach Ralph Krueger overhauled his lines, reuniting Skinner and Eichel. He also moved Olofsson back beside Johansson and a new face, Dominik Kahun.

In two games together, the new No. 2 line has thrived, scoring in both outings entering tonight’s road contest against the Montreal Canadiens. The Sabres have only scored three times in those games.

The Sabres’ feeble offense has contributed to their demise this season. Beyond Eichel’s line, which has struggled recently, no other trio has consistently produced offense.

Sure, it’s a small sample size. Still, Johansson, Olofsson and Kahun have shown they can ease some of the pressure on Eichel’s line.

“We just kind of think hockey the same way,” said Olofsson, who converted Johansson’s feed for his 20th goal in Monday’s 3-2 shootout win against the Washington Capitals.

They think and play the same way. The left-handed linemates all developed in Europe – Kahun is German – and spent their early years as a pro there.

“We grew up playing the same type of hockey and we all like to play with the puck and hold onto it and make plays, kind of a European style a little bit,” Johansson said following Wednesday’s practice inside KeyBank Center.

Kahun said: “We’re all a little bit the same players. We want the puck, we want to make plays with it.”

Krueger, who has spent most of his career coaching overseas, said the linemates’ style showcases their European roots.

“They just have a way of finding the lanes,” he said. “That movement, interchanging of positions, rarely are they stuck in one lane or in one position. They’re always looking for speed and space and they’re finding each other really nicely, too. There’s good puck movement there, and (they’re) very threatening on the rush. …

“Those are opportunities we need to be better at, and they’ve really done well in creating offensive rush opportunities.”

That movement, of course, can make them difficult to defend.

“We’re not just driving down our lane,” said Olofsson, who became the 16th Sabres rookie to hit the 20-goal mark. “We’re doing some crossing, and I think it’s kind of hard for the defenders sometimes. You don’t really know where we’re going to be all the time.”

Kahun, who scored Monday’s shootout winner, has looked comfortable since arriving from the Pittsburgh Penguins on Feb. 24. He scored his second goal with the Sabres in Saturday’s 3-1 road loss to the Philadelphia Flyers, burying Olofsson’s pass after Johansson’s work down low created the play.

“He fits perfectly into our line,” Olofsson said of Kahun.

Kahun, 24, spent four years in the DEL, morphing into one of the German league’s top stars. While he has spent the last two seasons in the NHL, his new teammates knew little about him.

“I didn’t know he was such a good two-way player,” Johansson said. “Me playing center, he ends up playing a whole lot and takes a lot of responsibility as well. He’s so good on both sides of the puck, I find. It’s fun to watch when he gets the puck, he makes things happen. That’s fun to play with.”

Olofsson added: “He can do it all.”

Krueger, however, has limited Kahun’s ice time, skating him less than 15 minutes ever game. Kahun is still trying to grasp his new defensive responsibilities, so Krueger doesn’t want to put too much on his plate.

“We’re making sure we keep the minutes at a level where he can perform defensively and do the things we’re asking him to do without the puck, as he wasn’t here for training camp,” he said.

Kahun acknowledged he still doesn’t feel comfortable without the puck in certain situations.