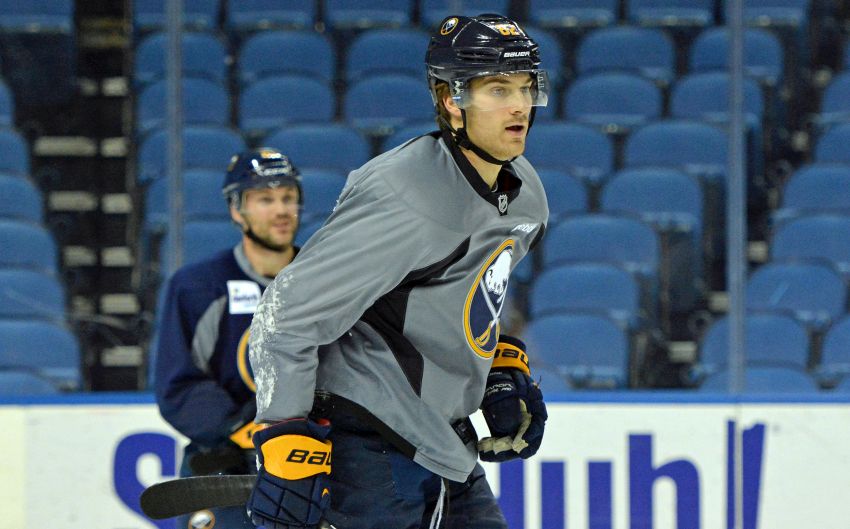 BUFFALO – After scoring a goal in three consecutive wins recently, his hottest stretch since he burst into the NHL almost three years ago, Sabres center Marcus Foligno believes he has finally turned a corner in what has often been an enigmatic career.

“Yeah, I do,” Foligno said Thursday following practice inside HarborCenter. “I feel a lot better in myself and the way I’ve been playing, the way I’ve been seeing the ice, and just the confidence is a little bit higher for me right now.

“I just want to continue trying to get the puck in the net and playing that physical style.”

The 6-foot-3, 223-pound Foligno hasn’t showcased much consistency throughout his 161-game career. At times, the 23-year-old looks like a dominant power forward, banging bodies and using his soft touch around the net. For long stretches, however, he’s often invisible.

His goal in a 4-3 win against Calgary on Dec. 11 was his first since scoring twice Oct. 14, a 20-game stretch. He was even a healthy scratch once earlier this season.

Foligno had his goal streak snapped in Tuesday’s 5-1 loss in Winnipeg. How can he maintain consistency like he recently displayed?

“I don’t know,” he said. “I think it comes from myself, just maturity, just adapting to the game and being the player I need to be every night. It’s just something to keep it simple and for myself not get away from the physical area.”

To Sabres coach Ted Nolan, the recent goals were no fluke. They illustrate Foligno’s growth as a young veteran. Believe it or not, only four forwards – Tyler Ennis, Patrick Kaleta, Cody McCormick and Drew Stafford – have a longer tenure with the Sabres than Foligno.

“Marcus, he’s really taken his profession to a certain level,” Nolan said earlier this week. “He’s staying out extra after every practice, taking some shots. … He’s really comfortable in his skin right now. He’s feeling good about himself. He’s driving to the net. He’s hitting, and he’s hitting hard. He’s a big, powerful forward. So he’s doing the right things, and he’s getting rewarded for it.”

Foligno said his “mentality” and “mental preparation” have improved this season.

“I think just approaching things level-headed and approaching every game like it’s just been a clean slate, that’s the biggest thing for me,” he said. “That’s what I want to be and be professional.”

Changing positions earlier this month helped jumpstart Foligno’s season. Foligno has mostly played left wing in the NHL, although he has occasionally moved to the middle for brief stretches.

This move could be permanent. Nolan switched Foligno so he could play on one of the top three lines.

“A young player just feeling comfortable on the left side, and all of a sudden you put him at center ice, and he feels just as comfortable at that,” Nolan said.

Foligno takes playing center, a position with more responsibility, as a challenge.

“I’ve been doing OK in the faceoffs,” Foligno said. “I think just being more supportive in our D-zone is helping out. But you go on the attack, it’s the same thing … you want to find your teammates and create as much havoc as you can. I might have a little bit more skating area than I did on the walls.”

With only four center spots, there’s a bit more prestige playing the position. Centers almost quarterback the line. Finding good ones can be difficult.

“I think there’s more of a demand for it in the league,” Foligno said about centers. “I think a lot of teams base their stuff off centermen. I think you look at the Stanley Cup champion L.A. Kings, they have four unbelievable centers, and they’re big, strong, fast and they know how to play the game. So if you have four centers or three really good centers, it’s going to help out your team that much.”