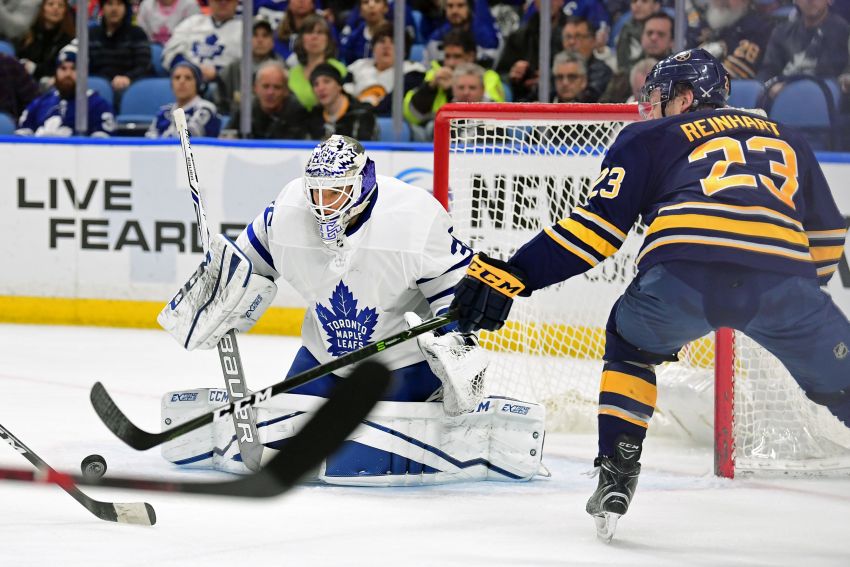 TORONTO – Given the Maple Leafs’ torrid run and the Buffalo Sabres’ futility, tonight could get ugly.

Right now, having won two straight games and six of the last seven, the Maple Leafs are scorching. They’ve scored a whopping 29 goals in that stretch.

They’ve won a franchise-record 13 straight games at home. They haven’t lost at the Air Canada Centre in more than two months.

For some perspective, the Sabres have won 11 home games all season.

The Maple Leafs, who are celebrating their 100th anniversary, can set the franchise’s all-time single-season wins record tonight by earning their 46th.

“It’s a pretty cool accomplishment for a team that’s been around a really long time,” center Tyler Bozak, the Maple Leafs’ longest-tenured player, told reporters in Toronto on Sunday. “It just gives us a lot of confidence, which is something you need at this time of year. I think we’re doing a good job of building that.”

The Sabres, meanwhile, have completely imploded during their four-game losing streak, getting outscored a stunning 16-2.

So will tonight be a blowout? Can the Sabres at least make the outcome respectable? They beat the Maple Leafs 5-3 on March 5 in Buffalo. But Toronto, which dropped its fourth straight contest that night, has only lost once since then. The Maple Leafs won 5-2 on March 15 in Buffalo.

Incredibly, they’ve done much of their damage without slick center Auston Matthews, who recently missed a month with a shoulder injury.

Of course, showcasing a balanced attack means losing a player as talented as Matthews probably won’t stymie your season. Eleven Maple Leafs have compiled 40 or more points. Five have scored at least 20 goals.

Three Sabres – centers Jack Eichel and Ryan O’Reilly and winger Sam Reinhart – have all hit the 20-goal and 40-point mark. No one else, however, has scored more than 13 times.

Eichel, the Sabres’ leading scorer with 22 goals and 54 points in 60 games, has a season-high four-game point drought entering tonight. Since returning from a high-ankle sprain March 17, he has just one assist.

Before Reinhart’s late power-play goal in Saturday’s ugly 5-1 road loss to the New York Rangers, the NHL’s lowest-scoring team (2.3 a game) had gone 163:44 without scoring a goal.

Since beating Chicago 5-3 on March 17, the Sabres have converted only two of the 144 shots they’ve pumped on goal. That’s a shooting percentage of just 1.4 percent!

So why can’t the Sabres, who averaged 36 shots an outing last week, finish more opportunities? They don’t get gritty and stand in front of the net enough.

“We’re not getting there enough to score in this league at this time of year,” Sabres coach Phil Housley told reporters Saturday in New York. “At five-on-five, even strength, you have to be willing to go there, especially the first guy and then try to take the goalie’s eyes.”

Having scored only 173 goals through 75 games, at their current pace, the Sabres would score 189 goals this season, 10 fewer than a year ago. The Maple Leafs have already scored 248 times. The Sabres haven’t scored 200 goals in a full season since 2011-12.

Last week, Housley lamented how his goalies must play a perfect game to win. On Saturday, the Sabres outshot the Rangers 21-10 in the first, yet ended the period trailing 2-0.

“I can’t fault Robin for any of those goals, missed coverages, missed picking up guys,” Housley said. “I don’t think he had a chance on any of those. When four goals went in (on) four shots, it was just trying to save (him) a little bit and maybe send a message to our team.”

Reinhart’s goal was first the Sabres scored for goalie Linus Ullmark, Lehner’s replacement, in 175:44 of action over four games.

Notes: The Sabres had Sunday off. … Tonight is the Sabres’ first visit to Toronto since Feb. 11, 2017. … Eichel and Matthews, two young American stars, will face each other for the first time this season. … The Sabres have won at least 46 games in a season eight times. The last time, 2006-07, they won a franchise record 53 contests.

One thought on “Sabres, Maple Leafs going in opposite directions as rivals meet”