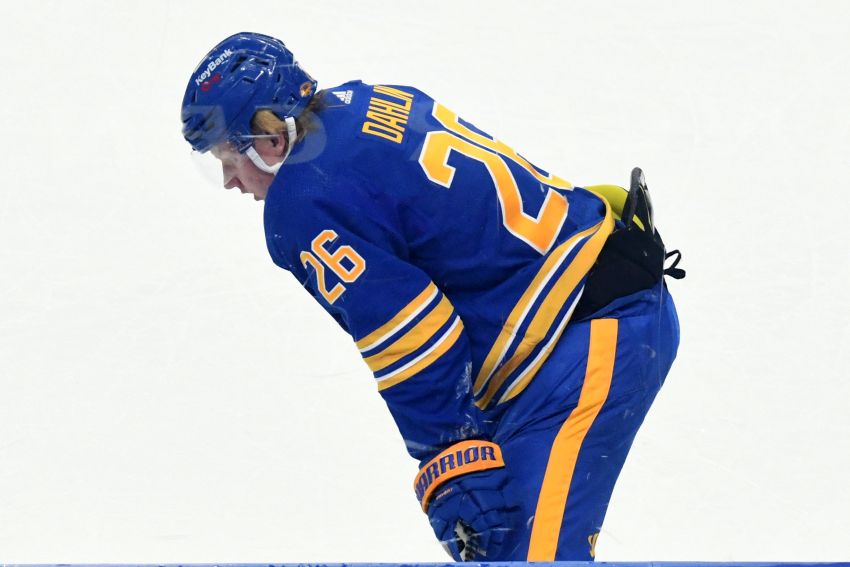 Rasmus Dahlin and the Sabres have been experiencing some rough times. ©2021, Micheline Veluvolu

BUFFALO – In addition to his job as coach, Ralph Krueger has also become the Sabres’ spinmeister, trying to glean some positives following loss after loss.

“I don’t feel (the) quit of anybody,” the embattled Krueger said on a Zoom call after Monday’s 6-0 shellacking from the Washington Capitals inside KeyBank Center, the Sabres’ 11th consecutive loss.

Krueger’s ability to communicate helped the Sabres take notable steps last season and even early this one. He got through to his players, something his predecessors couldn’t do. The Sabres, after years of futility, seemed to be on the right path.

But a lot has changed over the last six weeks, and Krueger’s tenure with the Sabres could soon be over.

It’s hard to fathom the hapless Sabres, who have lost 15 of their 17 games since their COVID-19 pause ended last month, can keep the status quo.

They’ve become the NHL’s laughingstock. After a 4-3-2 start, they’ve imploded, sinking to the bottom of the league again. They often showcase little passion.

“It’s tough to find the energy right now, to be honest, when you’re kind of battling and things aren’t going your way,” Sabres winger Sam Reinhart said. “So we just need to dig deeper and get our legs under us and find any sort of bit if energy here, because nothing’s changing this except for us.”

He added: “I love the group of guys, love the coach. The result isn’t good enough.”

After a decent start Monday, the listless Sabres chased the rest of the game.

The Capitals outshot the Sabres 13-2 in the first period. The Sabres had eight shots when the Capitals led 4-0 in the second period.

“What I feel was an engagement in the process and a first period that went radically against us due to mistakes on our part and certainly missed opportunities on the other end,” Krueger said. “We didn’t execute the way we needed to against Washington to create offensive chances. We gave up six, seven shooting opportunities. They got the lead and the game ran away from us.”

When the Sabres actually generated offense – they had a three-on-one and a three-on-zero – they missed the net.

The Sabres, who lost 3-0 Saturday, have been shut out in back-to-back games twice in barely two weeks.

“That’s been a big problem for us, is burying our offensive opportunities,” Okposo said. “I’ve never seen it through 27 games like the way it’s gone with essentially everybody. It’s just unfortunate. It’s tough, it’s tough right now.”

The Sabres play a road game tonight against the New Jersey Devils. What could happen Wednesday?

They haven’t won since they beat the Devils 4-1 on Feb. 23 in New Jersey. The Devils, who also endured a long COVID-19 pause, have lost four straight games and 12 of their last 14.

It’s as winnable a game as the Sabres will have over the final two months this season.

Evgeny Kuznetsov scored 18:46 into the game, the only goal the Capitals needed. Alex Ovechkin closed the scoring 16:21 into the third period, his 717th career goal, tying him with Phil Esposito for the sixth-most goals in NHL history.