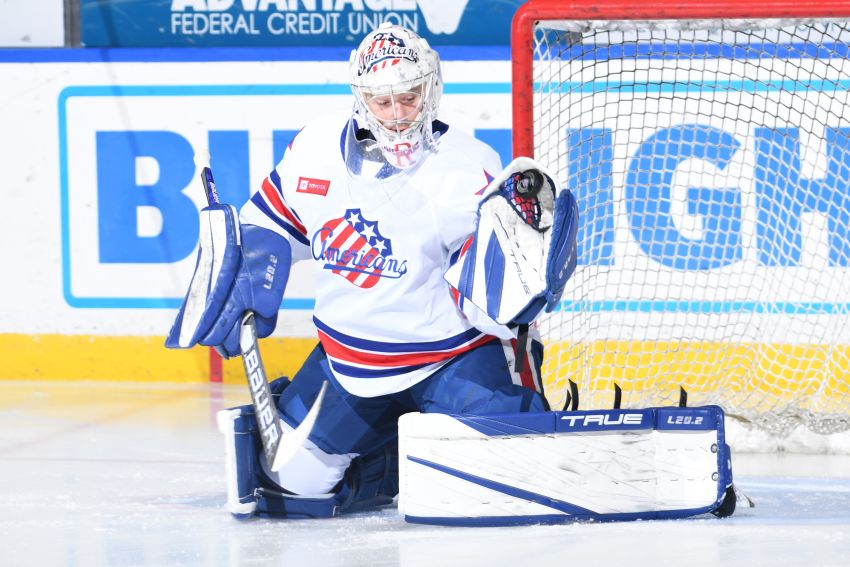 Goalies Ukko-Pekka Luukkonen and Malcolm Subban are both sidelined after suffering injuries in Tuesday’s 6-1 loss to the Tampa Bay Lightning.

Luukkonen, who suffered a lower-body injury, is listed as week to week on the team’s injury report. Sabres general manager Kevyn Adams said Luukkonen will likely miss at least a few weeks. The Finn underwent an MRI this morning.

It’s unclear when Luukkonen was hurt. He departed after the first period.

“UPL had been in the zone,” Sabres coach Don Granato said following this morning’s practice inside KeyBank Center.

Meanwhile, goalie Malcolm Subban, who replaced Luukkonen for the final 40 minutes, is month to month.

Yes, the Sabres have another full-fledged goalie crisis.

Pat Maroon fell on Subban in the second period, earning a goalie interference penalty. Subban, who was in noticeable discomfort, finished the game. He possibly suffered a wrist or hand injury.

“He played through it and made some great saves in the third period as well,” Granato said of Subban gutting it out. “But he’s proven that he’s a team guy. He works hard for his teammates. He cares about his team and teammates and that was a perfect example last night.”

To replenish their net, the Sabres this morning signed Houser to a one-year, $750,000 contract and recalled Dell from the Rochester Americans.

Houser, Dell and goalie Dustin Tokarski all practiced this morning.

Tokarski, however, hasn’t been cleared to play since testing positive for COVID-19 on Dec. 2. He started practicing again Dec. 27.

Granato said Tokarski, 32, won’t be available until he’s “fully himself, from a health standpoint.”

“Which could be soon,” Granato said.

Granato said his “inclination” is Dell will start Thursday’s road game against the Nashville Predators.

Dell struggled with the Sabres earlier this season, compiling a wretched 0-5-0 record with a 4.52 goals-against average and an .872 save percentage in seven games.

In Rochester, however, he has played well, registering a 5-0-0 mark with a 2.76 goals-against average and a .910 save percentage in five outings.

Dell said he has started “to get into a bit of a groove.”

“With the last few years, I haven’t been playing a ton of games and, I think, getting that game experience back in the last little while has really helped me get back to where I want to be,” Dell said.

The Sabres’ other goalie, veteran Craig Anderson, hasn’t played since suffering an upper-body injury Nov. 2. Anderson is listed as month to month.

Houser, who started four games for the Sabres last season, his first NHL appearances, has been playing on a AHL contract with the Amerks.

“Houser was an inspiration last year and did exceptionally well,” Granato said. “He’s an overachiever and that’s exactly what we’re about right now and what we need.”

The Sabres this morning also assigned winger Jack Quinn and defenseman Casey Fitzgerald to the Amerks.

In other news, Granato said defenseman Robert Hagg, out the last seven games with a lower-body injury, will play Thursday.

“They look good out there,” Granato said.