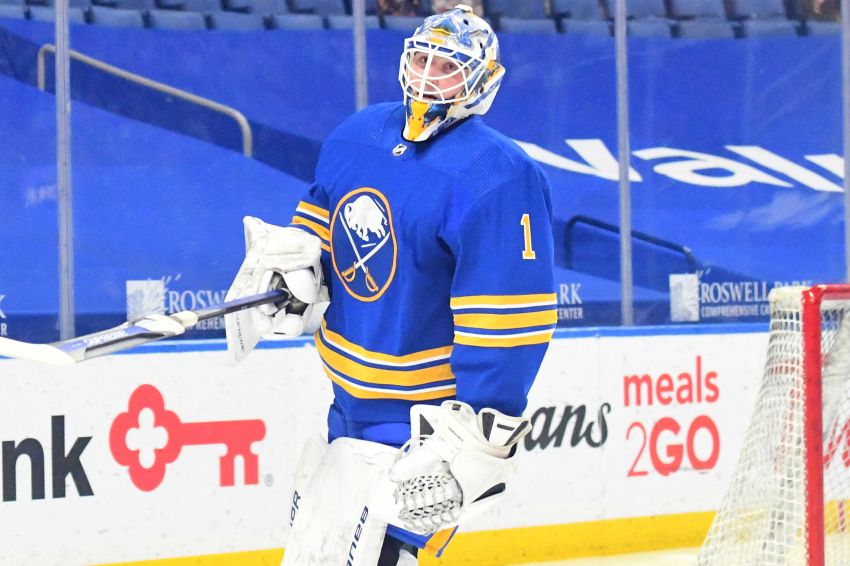 After a solid few weeks, the Buffalo Sabres have started reminding everyone why they’ve occupied the NHL’s basement for months.

Saturday’s afternoon’s ugly 6-2 setback to the Boston Bruins was their fourth consecutive loss and fifth in the last six games.

In an outing reminiscent of the Ralph Krueger era, the Sabres looked disjointed all over the ice, allowing the Bruins to throttled them.

On top of their dismal performance, rookie goalie Ukko-Pekka Luukkonen suffered an undisclosed injury when he caught his left skate on the goal post in the waning seconds of the second period.

Interim Sabres coach Don Granato did not have an update on Luukkonen, who has started the last three games.

“That’s added on to the tough day,” Granato said on a Zoom call of Luukkonen’s injury. “It was a tough day all around. That’s obviously a big one, because this is a great opportunity for him to get some minutes and now that’s in question. He battled tonight.

“Every now and then you have a tough day. Everybody had a really tough day today. (Luukkonen) was the finish.”

Luukkonen, 22, was injured as he moved across the crease to stop Taylor Hall’s shot. After he caught his skate on the post, he fell backwards and appeared to grab his left knee.

The Finn was helped off the TD Garden ice with the Sabres trailing 3-1. Dustin Tokarski replaced him for the third period.

The Sabres want to give Luukkonen, who underwent hip surgery two years ago, a long look as the season closes. They possibly penciled in their top goalie prospect to start three of their last four games. He has played four of the past five contests.

“He works so hard and he’s such a great a guy off the ice and he’s been doing a great job,” Sabres center Riley Sheahan said. “Yeah, it’s tough seeing him go down. He’s been playing great. Especially the timing, close to the end of the season. I hope he recovers quick.”

The Sabres have become woefully thin in goal. Carter Hutton and Linus Ullmark are recovering from lower-body injuries. Granato said Tuesday that Hutton had suffered a setback and Ullmark “isn’t in the picture.”

It seems unlikely either will be ready to play again this season.

Michael Houser, who has spent much of the season on the taxi squad, is the only other goalie in the organization on an NHL contract. Houser has never played an NHL game.

So the Sabres could rely on Tokarski, who has played 13 games this season. He allowed three goals on 14 shots in the third period Saturday as the Sabres imploded late.

Despite their struggles, the Sabres hung around. After Craig Smith scored the first of his three goals 1:21 into the game, Sheahan’s short-handed breakaway goal at 12:35 tied it. It was only their second shot on goalie Jeremy Swayman, who faced just 19 all afternoon.

Sean Kuraly scored later in the first period before Patrice Bergeron extended the lead in the second.

“They were working so hard, shift in, shift out,” Sabres defenseman Rasmus Dahlin said of the Bruins. “I think us as a young group have got to learn from a team like that. Their star players work as hard as their fourth line. It’s a tough team to play against.”

The Sabres, who have played a more aggressive, rigid style under Granato, consistently pulled up at the blue line when they had the puck.

“So many components just didn’t look like us,” Granato said. “And again, that’s why I say every now and then you have a tough day and you look things and say, ‘Why are we complicating what should be really simple?’ And that was the entire game for us. We just kept making it hard on ourselves.

“Obviously, no discredit to our opposition. They played hard – very hard and a hell of a team. But we just couldn’t, for whatever reason, get to a simple game. And the shot is a perfect example. We didn’t get any pucks behind them. We passed on shots we could’ve taken. We were too easy to play against in that regard and it was self-inflicted, a very large part of that.”

Toward the end of the teams’ eighth and final meeting this season, tempers flared up. Bruins pest Brad Marchand wanted to fight Dahlin after the Swede cross-checked David Pastrnak almost eight minutes into the third period.

“That was a surge – probably the biggest surge of the game for us – through the lineup and through the group, which is good,” Granato said. “I do like (Dahlin) being feisty on occasion. I don’t like it taking him off his game. But I don’t think anybody was on their game today. So if you’re not on your game, you should probably be feisty and compensate some other way.”

Notes: Sabres center Casey Mittelstadt registered two assists and has compiled two goals and six points over a five-game point streak. … Luukkonen made 26 saves. … The Sabres finished the season 1-6-1 against the Bruins. … The Sabres allowed 46 shots and have allowed 40 or more shots in three straight games. … The Sabres, who host the New York Islanders on Monday, have today off.