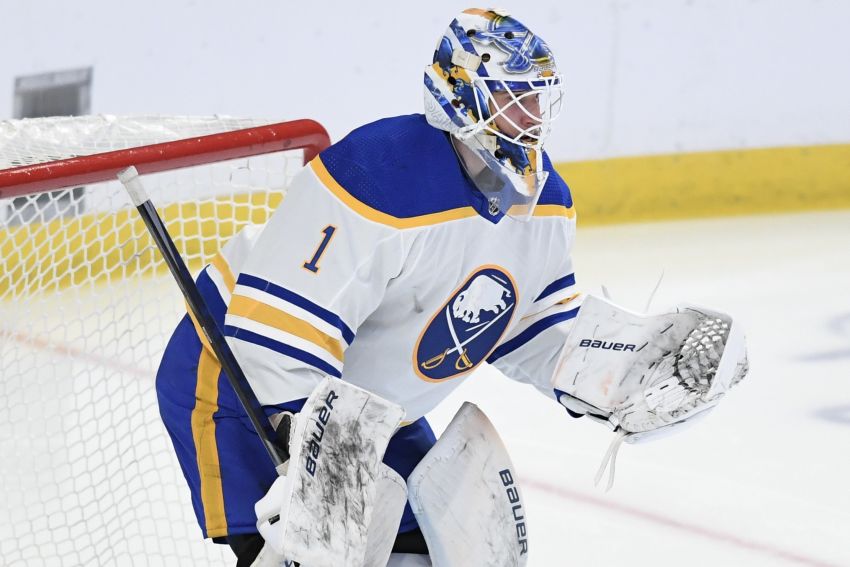 BUFFALO – After the gut punch, a disallowed tying goal with 56.2 seconds left, the Sabres nearly knotted it again, hitting the post before the New York Rangers staved off their late push to secure a 2-1 victory.

While the Sabres ultimately lost their sixth straight game, their response after the offside review wiped out winger Victor Olofsson’s goal was significant.

“It’s a wave of emotion,” Sabres coach Don Granato said. “I credit our guys to stay on it. I think (Tage Thompson) hit the post right after that. So that shows you the belief system was OK. We got some bad news but we’re let’s drop the puck, let’s go, and we believe we can do it. That was all the way to the end.”

It was a frenzied finish. It was unclear at first if Olofsson beat Rangers goalie Alexandar Georgiev. Following a review, a good goal was announced along with an additional review for offside in the situation room in Toronto. After the second review, the goal was called back.

About 25 seconds before Olofsson’s negated goal, Sabres defenseman Rasmus Dahlin appeared to be in the zone ahead of his teammates.

Granato said he asked the officials if the play could be reviewed for tag-up offside. But the NHL had made its decision.

Does Granato agree with the call?

“I can’t have emotion in it, I can’t think about it,” he said. “You trust, it’s not my job. My job is to make sure our team’s ready. I can’t afford to be distracted by that.”

“Yeah, that stung,” Sabres winger Kyle Okposo said of the negated goal. “A lot of emotions when we tie the game there and obviously the offsides. I didn’t get a chance to really see the replay, but tough to take that goal back. We hit the post in the end and had some chances.

“That one’s tough, especially I didn’t think we started the game very well. To gather momentum and start to play the way we wanted to it would have been nice to get a result.”

The Sabres looked downright awful early, falling behind 1-0 4:48 into the game and getting outshot 12-6 in the first period.

Rookie goalie Ukko-Pekka Luukkonen kept them in the game, making a slew of big saves, including point-blank stops on Kaapo Kakko and Chris Kreider in the second period.

Luukkonen, who also started Tuesday’s 2-0 loss to the Anaheim Ducks, made 29 saves Friday.

“He’s been great,” Okposo said. “We’ve given him one goal in two games. Obviously, that’s not enough. He’s been fantastic. He made three or four 10 bellers tonight.”

Thompson said: “He’s been giving us chances to win. We’ve just got to start scoring.”

Luukkonen’s exploits before the crowd of 9,703 fans inside KeyBank Center gave the Sabres life, and rookie Brett Murray scored their only goal 14:37 into the third period.

Through all their struggles over the past five weeks, the Sabres could at least boast they were scoring goals. The potent attack was perhaps their most visible sign of growth for more than one quarter of the season.

If the Sabres could just tighten up defensively and trim some goals against, it seemed like they could start winning some games again.

Well, over their last two outings, they’ve allowed just four goals but scored only one.

“It just hasn’t gone in,” Okposo said. “We’ve just got to bear down, and we have to try to get to the net. Get some second and thirds. We’re going to score goals again. It’s going to happen. Right back at it tomorrow night and we’ve got to have a short memory.”

One thought on “Sabres lose tying goal on offside review, fall to Rangers: ‘A wave of emotion’”